To what extent can Of Mice and Men be considered a religious allegory?

In my opinion, Of Mice and Men can be interpreted on three main levels. On the surface, it is an entertaining tale detailing prejudice and how two men strive to obtain their dream. It could also be interpreted as a criticism of 1930’s America. However, there is a deeper meaning to the novella, as parallels can be drawn between situations depicted within the novella and tales from the bible, and the novella could be viewed as a story about the fate of man in a fallen world.

Don't use plagiarized sources. Get your custom essay on
“ To what extent can Of Mice and Men be considered a religious allegory? ”
Get custom paper
NEW! smart matching with writer

These three levels intertwine, and on some occasions complement each other, for example original sin and the Wall Street crash. To answer the question, it is necessary to ascertain all of the links to religion, and to decide whether this was the main reason of writing.

This echoes the fact that Cain has to be a “fugitive and a vagabond in the earth” after he kills Abel. (King James Bible- authorised edition). This is further emphasised in the bible as Cain, “went out from the presence of the Lord”, meaning he was cast out, as were the two protagonists of the novel.

John Steinbeck raises a religious point with the relationship between George and Lennie is also shown as Cain, “shalt rule over him (Abel)”, which resembles the fact that, in the book, George is presented as the more intelligent of the pair, and is obviously the leader.

A major theme in the bible is co-existence, and the two main protagonists show this. Each has different characteristics, and strengths, and each must combine to survive. George protests that life would be easier without Lennie, but in reality he needs Lennie as a friend. Steinbeck also introduces the same question as Cain, in Genesis chapter 4 of the bible, “Am I my brother’s keeper?” by having a dominant character looking after a subservient protagonist. Steinbeck suggests that the attitude of Cain in the genesis story, “Am I my brother’s keeper”, has become universal.

All of the ranch workers are shocked and suspicious by their partnership, “Ain’t many guys travel around together”. Steinbeck interprets this as part of the message of the biblical story, and the curse of Cain; distrust. This message interlinks with the criticism of 1930’s America as, on a basic level, the fact everyone is suspicious of George and Lennie travelling together is linked to the depression, and the pessimism caused by it. The two main protagonists that reflect this are Crooks and Curley’s wife, who detail the stratified society, and the fact the dream is not open to everyone, another criticism of American society. A second parallel from this passage is the curse that, “every one that findeth me (Cain) shall slay me”, which resembles the fact that, whenever George and Lennie find a ranch, they are cast out.

The Wall Street Crash and subsequent depression also echoes the “original sin”, in the Garden of Eden story. Original sin is a Christian belief that there is a defect in our nature. God made us, but we do not always think objectively or dispassionately about others, and we use people to suit our selfish needs. It is not our fault that we have these defects, yet we have them nonetheless. In the novella, this is represented as it is not George and Lennie’s fault that they have lost their money, yet it is they who have to move from ranch to ranch in search of work. In the Genesis story, the descendants of Cain are shunned by others, much as Lennie and George are, yet the descendants have done nothing wrong. Their fate is beyond their control, which is the concept of original sin. The title reflects this message; it is a phrase from a poem by Robert Burns, which emphasises the futility of human endeavour. “The best laid schemes of Mice and Men…leave us nought but grief and pain”.

One of the key themes of the novella, the American dream, also has religious implications. Lennie wants to, “live off the fatta’ the land”, which is exploiting God’s creation, just as Adam and Eve exploited God’s Garden of Eden in the bible. Also, in the passage in Genesis chapter 4, Cain is cursed, “When thou tillest the land, it shall not henceforth yield unto her your strength”. This curse is the opposite of the American dream, which is so attractive to Lennie and George. This aspiration could also be a metaphor for heaven, and then the failure of Lennie and George to attain this farm is associated with the inability of man to achieve this goal after the Curse of Cain. Steinbeck is referring to the fact that it may not be possible to get to heaven in this fallen world, after the curse of Cain, we are all tarnished.

Structurally, Of Mice and Men even resembles a bible story. It is reasonably short and contains a moral, drawn from the title, that the, “best laid schemes of mice and men (often go awry)”, hinting at the impossibility of attaining the dream of Lennie and George.

However, the dream of the two main protagonists can be interpreted in another way, as breaking free of the great depression and the downward nature of things at the time. This fact is in keeping with the novella being a criticism, and is reflected in the cyclical nature of the book, and the way that the whole book has a similar structure. Each chapter starts with “light”, and this represents the hope of George and Lennie striving to break the cycle. The message of hope would have appealed to the working class affected by the depression, and the religious implications would have added to its success, due to the pious nature of the public at the time.

The refuge which George instructs Lennie to go to can be thought of as a religious sanctuary, it is a place where Lennie can go in times of trouble. Linked to this is the way John Steinbeck describes the natural environment of Soledad. There are a greater number of techniques used by Steinbeck when he is describing the settings, highlighting the perfection of these places.

This is especially true of the first page, and the description of the ranch itself. Steinbeck uses personification, “recumbent limbs”, and the present tense, “the water is warm too”, to emphasise the timeless nature, and the fact that this place is not subject to change. This, “perfect” landscape can then be compared to the Garden of Eden in the creation story, and the fact that if God created it, it must be perfect. This impression is further confirmed by the way the hill-side is described as a haven of safety, away from man. However, man is intruding on this scene, and destroying the landscape, which is reminiscent of man’s fall from grace, and the curse of Cain. Also, the fact that death occurs here, in this idyllic setting, shows the abuse of this God-given land, by human influence.

Temptation is a major theme in this book, just as it is in the bible. In this novella, temptation is represented by women, specifically Curley’s wife, and all of the women in the novella are disreputable, “cathouse”. They represent the apple in the creation story, as they try to tempt George into being fired, thus destroying the dream. Curley’s wife wears a red dress which is a reference to a “scarlet woman”, and, in the bible, the, “whore of Babylon”. The, “water snake” that is, “plucked”, at the conclusion of the novella represents the evil influence on the creation story, in the Garden of Eden. In Of Mice and Men, this evil influence is women, but in the bible, it is the apple. Steinbeck also criticises American Society at the time, by not giving Curley’s wife a first name. This makes it seem that she is the property of Curley, rather than herself, and sexism was a major problem at the time of Steinbeck writing.

The final religious parallel is that of George killing Lennie for Lennie’s good. This selfless act could be representative of Jesus dying for Christians. There is also the fact that George and Lennie’s stay at the ranch lasted three days, and that is a reference to Jesus’ rising. Jesus tried to reverse the inevitability of Cain’s curse by sacrificing himself- just as Lennie is sacrificed for the sake of the dream.

Of Mice and men is certainly a religious allegory, as it mirrors parts of the bible, and it is possible to see where John Steinbeck got his inspiration from. He even wrote a novel called, “East of Eden”, which is a quote from genesis chapter four. I believe that of mice and men was written to detail the plight of man after the curse of Cain, as is shown in the bible, and that the major religious theme is co-existence, symbolised by Lennie and George .This does not mean, however, that Of Mice and Men is not a criticism of 1930’s America, he criticises the racist views and sexist nature that existed at that time. The two aims of religion and criticism combine to form a successful novella that reads like a bible story, and can be interpreted on many different levels.

To what extent can Of Mice and Men be considered a religious allegory?. (2017, Oct 29). Retrieved from http://studymoose.com/to-what-extent-can-of-mice-and-men-be-considered-a-religious-allegory-essay 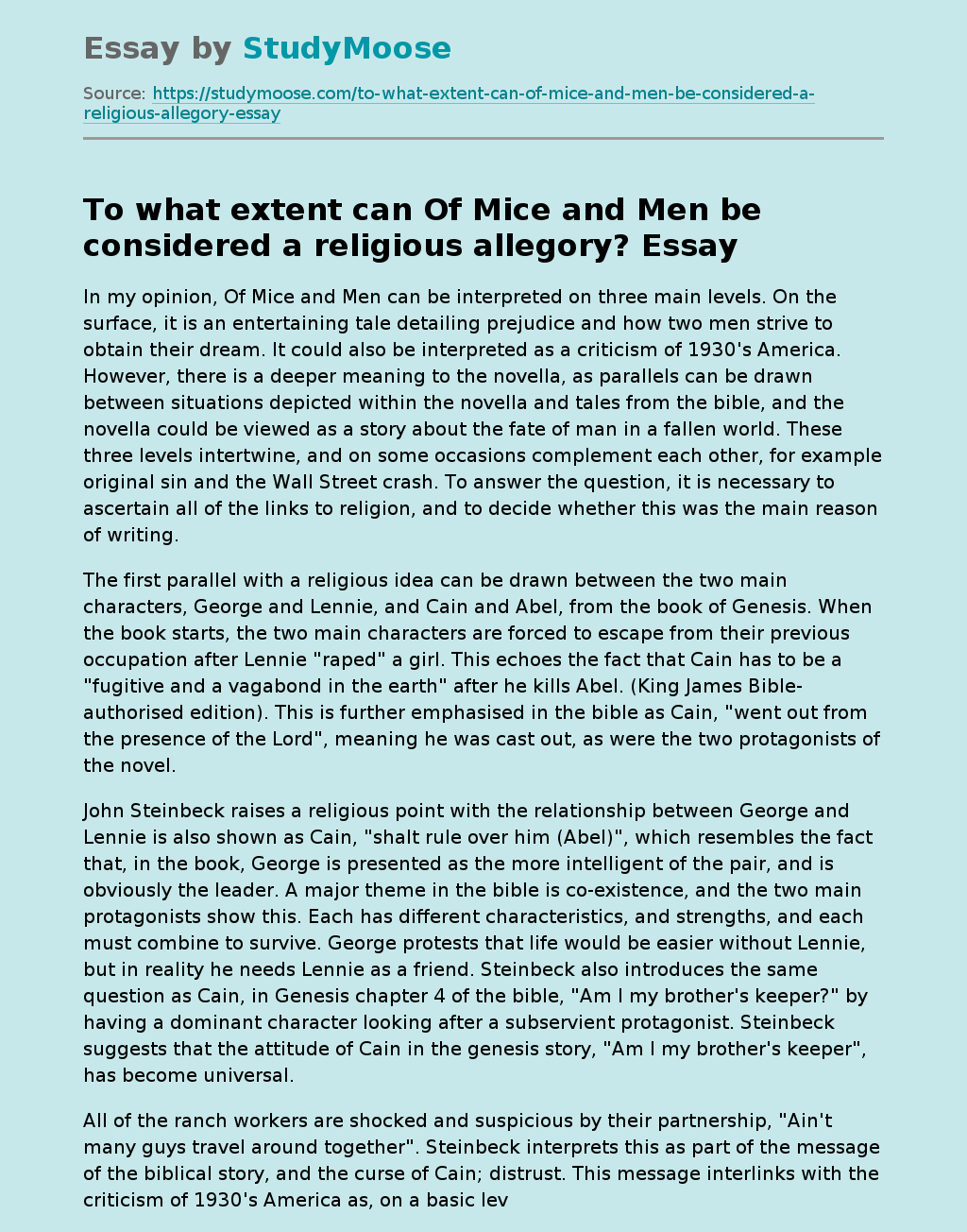