Lord of the Flies as a Religious Allegory

There are many ways to read «Lord of the Flies». To some it is simply an adventure story about a group of boys stranded on a desert island, others interpret it, and see the boys as metaphors for important aspects of our everyday lives. Several different theories have been presented, claiming to explain Golding’s symbolism. What many seem to have overlooked, is that the answer is right there in front of them. It is in the title: «Lord of the flies», a translation of the greek word «Beelzebub».

Don't use plagiarized sources. Get your custom essay on
“ Lord of the Flies as a Religious Allegory ”
Get custom paper
NEW! smart matching with writer

And what do most people think about when they hear this name? The Devil, Satan himself… «Lord of the Flies» is an allegory showing the fight between Christian and Pagan values. The character that more than anyone represents Christianity in the book is Simon. The first time you read through the story, he is probably the character that is the hardest to describe and find a purpose for. He is different and does not fit in among the other boys, But if you go deeper into the book, it becomes more and more obvious that Simon’s life on the island is strikingly similar to the life of another person that did not fit in.

A person that lived some 2000 years ago in Israel. Just like Jesus Christ Simon cared about the small and vulnerable, he loved nature and all living.

Simon is also a prophet. He knows that Ralph will come back to civilization alive. He does not say anything about himself or Piggy.

Neither Simon nor Jesus are ever scared, because they are certain that what is meant to happen will prevail. They were both able to challenge the unknown and conquer it. Jesus won over death, Simon faced the Beast and came back alive. Jesus did it for all the people living on Earth, Simon for the other boys. What is so puzzling and sad is that they were both killed when they tried to share what they had found out. They were both killed in anger and in the belief that they were evil. On the other side, representing paganism and hedonism, we see Jack and his hunters. All they care about are themselves. They do not want to live by any rules and they do not have any respect for the island, They burn and kill without worries, all to please themselves. The tribe loses all features of civilization, the only thing that influences them, except for their own will, is the fear of the Beast. None of them have ever seen an actual monster, but it is a fear of the unknown. In many ways the Beast becomes a religion for the boys.

As we know hunters did in ancient times, the choirbboys start to sacrifice part of their prey, They leave meat so that the Beast shall like them and leave them alone. The most abstract and symbolic incident in the book occurs when Simon sees this sacrifice. The symbol of Christianity, and what is good, meets the symbol of the Devil, and all that is evil. We know that Simon is only hallucinating because of his epilepsy, but a lot of what he sees make sense. The sow’s bloody head convinces him that «‘everything is bad business’…

The half shut eyes were dim with the infinite cynisism of adult life.» The Lord of the Flies says «Fancy thinking the beast was something you could hunt and kill… I’m part of you… I’m the reason why it’s no go… Why things are what they are.» What Golding is saying is that the Devil is hidden somewhere deep inside of all people. Without morals, law and order it will eventually surface and come out.

Lord of the Flies as a Religious Allegory. (2016, Jun 05). Retrieved from https://studymoose.com/lord-of-the-flies-as-a-religious-allegory-essay 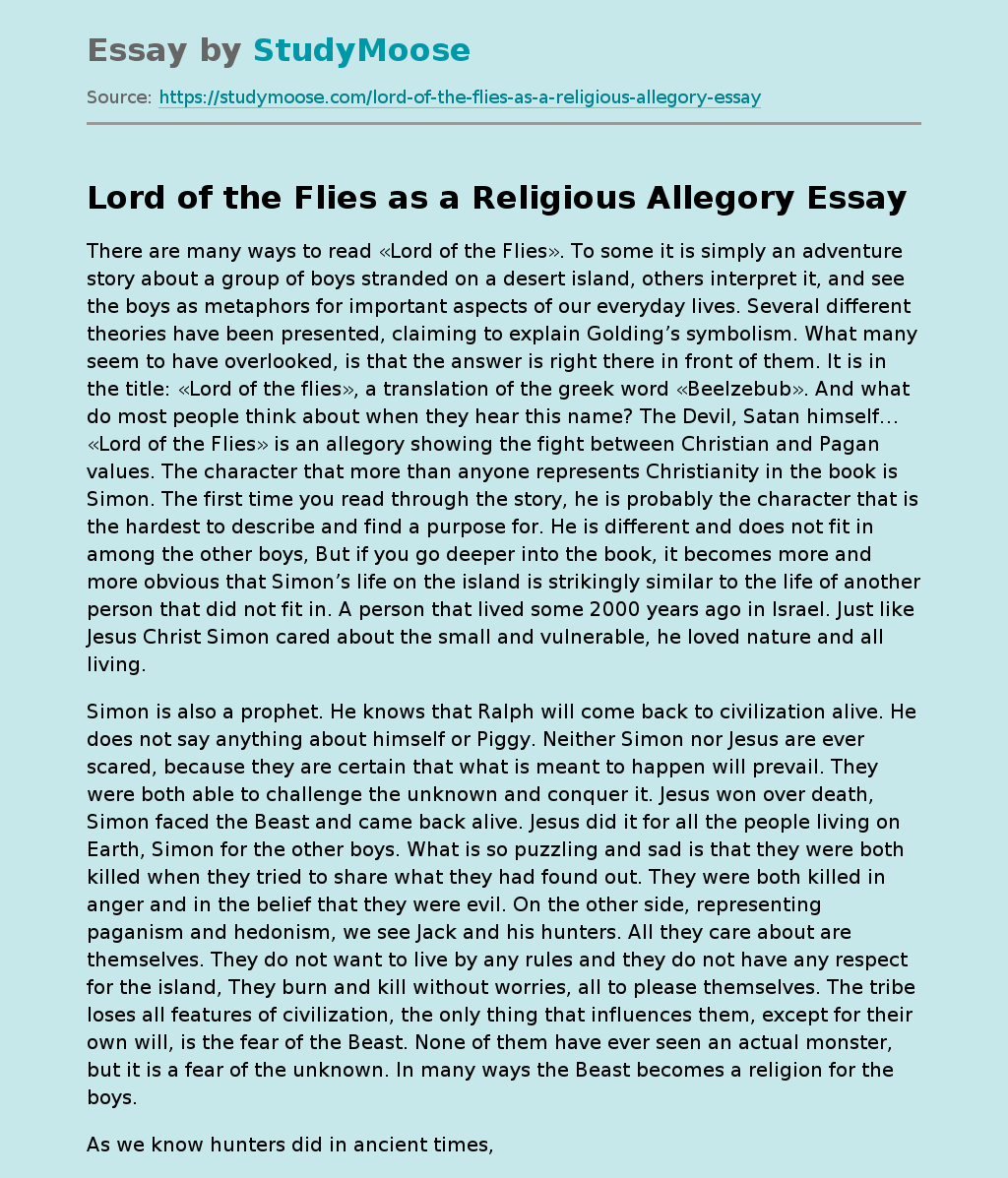