Booker T. Washington and W.E.B. Du Bois offered different strategies for dealing with the problems of poverty and discrimination faced by Black Americans at the end of the nineteenth and the beginning of the twentieth centuries.

Using the documents and your knowledge of the period 1877-1915, assess the appropriateness of each of these strategies in the historical context in which each was developed.

In reference to the years between 1877 and 1915, I assessed that, based on between each of these strategies, Booker T.

Don't use plagiarized sources. Get your custom essay on
“ Apush 1989 Dbq ”
Get custom paper
NEW! smart matching with writer

Washington’s approach was more appropriate during the time period between 1877 and 1915 than W.E.B. Du Boise’s strategy, for the simple fact that while his strategy would take longer to accomplish deal with the problems of poverty and discrimination in comparison to W.E.B. Du Boise’s strategy, it is far more likely that changes to a society would be accepted if they were introduced slowly into people’s minds by Booker T. Washington’s approach.

In 1877 Reconstruction ended with the signing of the Compromise of 1877.

In 1877, there was no presidential candidate that had received the appropriate number required to take the white house. Samuel Tilden had gotten only 184 of the 185 that he needed to beat Hayes. Therefore it was up to Congress to decide who would win the presidency. There were a total of 15 people voting. Seven of them were republicans; while the other eight were democrats. Obviously the Republican candidate, Rutherford Hayes, won the presidency. However, to avoid claims of unfair voting, President Hayes agreed to three compromises.

He would pull troops out of the south; give money to the south for internal improvements, such as railroads, and to allow a well known southerner to be in his cabinet. This marked the end of reconstruction. Reconstruction was unsuccessful because according to (Doc J),” colored” people were still drinking from “colored” water fountains. This is a reason as to why the appropriateness of Booker T. Washington’s strategy for dealing with the problem discrimination faced by Black Americans, such as the discrimination applied to water fountains.

Viewing “School Enrollment Graph” in (Doc A), it is apparent that W.E.B Du Boise’s strategy for reducing discrimination in schools would not have worked, if it were not for the fact that there simple were not enough people willing to teach black students. Although there were a few black teachers educating young black American’s, it was still not enough to turn the tides of discrimination until a later date. Many people in this time period are just not ready to accept the education of blacks in school. It goes against the values and traditions they were taught. An appropriate reference is that of the talented tenth. The talented tenth was a phrase used by W.E.B. Du Boise to express the possibility that only one out of ten in the black population would one day leaders of the black race. He believed that only through education that this one tenth would one day accomplish this.

However, Booker T. Washington’s approach was much more silent and effective. In the Atlanta compromise, Booker T. Washington agrees with southern white leaders for black people to, not promote suffrage for their people, protest against discrimination, all while only getting just basic education, such as training to be a factory worker. The drastic increase in black Americans being enrolled in school in 1895 is due to the Atlanta compromise. This proves that Booker T. Washington’s approach, while cumbersome, was highly effective in comparison to black education opportunities beforehand. The rate does rise; showing that after 1915 there would be a much better chance of any percent of Black Americans getting into college.

Referring to (Doc B), one can assess that while black illiteracy was still at large, it is decreasing at a steady rate. This is exactly the type of strategy Booker T. Washington promoted. This decrease in illiteracy over time would eventually allow more and more black students to attend college, without hitting the invisible threshold that white southerners had set primarily by white southerners to prevent black Americans from becoming equal to White Americans; even in education. Every time the illiteracy rate was lowered, it did not seem unreasonable to allow a little more leniency in their customs of discrimination. Over time Booker T. Washington’s strategy for reducing discrimination regarding education would be successful. Again, Booker T. Washington’s strategy for dealing with discrimination is proven to be more appropriate than W.E. B. Du Boise’s strategy because it is represented in (Doc C). (Doc C) shows the eventual decrease in the lynching of black people compared to white people.

White people would rather lynch a person they didn’t have a relationship with, than a fellow coworker, of student. A summarization of Booker T Washington’s strategy presented in The Atlanta Compromise Address or “Document D” would be to say that he wanted all black Americans to learn trades. He wanted them to pass on those skills, and use those skills so their families could have a better life. “Cast down your bucket where you are…while doing this you can be sure in the future, as in the past, that you and your families will be surrounded by the most patient, faithful, law-abiding, and un resentful people that the world has seen.” EEE

A summarization of W.E.B Du Bois strategy can be described as ceaseless agitation stated in “The Niagara Movement”- “The Niagara Movement proposes to gain these ends…. If we expect to gain our rights by nerveless acquiescence in wrong, then we expect to do what no other nation ever did. What must we do then? We must complain. Yes, plain, blunt complain, ceaseless agitation, unfailing exposure of dishonesty and wrong- this is the ancient, unerring way to liberty, and we must follow it.”-Document F I disagree with his strategy for the period 1877-1915 for he only thought about a small number of the black race, the top ten percent. He was going to send them to Harvard and some how they were going to become the intelligence for the black race as a whole. This also appoints only specific figures as a mini government of the black race. Mainly in Booker T Washington’s proposal, it just seems as if he included the whole race as opposed to W.E.B’s proposal pertaining to only a small select few.

Washington used controversial methods that did not directly challenge white supremacy in order to deal with the problems of poverty and discrimination faced by black people. He was a teacher at Tuskegee Institute in the 1880s, which was an industrial school at the time. He emphasized practical skills and stressed that a vocational education would help blacks acquire economic independence which in turn would lead to the white race recognizing their political rights. However, document H indicates that his ideas received much scrutiny.

People accused his emphasis on vocational training as an idea which stifled the progress of the black race because it “condemned” the education received by college educated blacks. Also, many believed that vocational education served as a barrier which kept blacks from achieving higher levels of education. Furthermore, many thought that Washington’s methods did nothing to help black racial progress and thought accommodation created a larger polarization between blacks and whites. 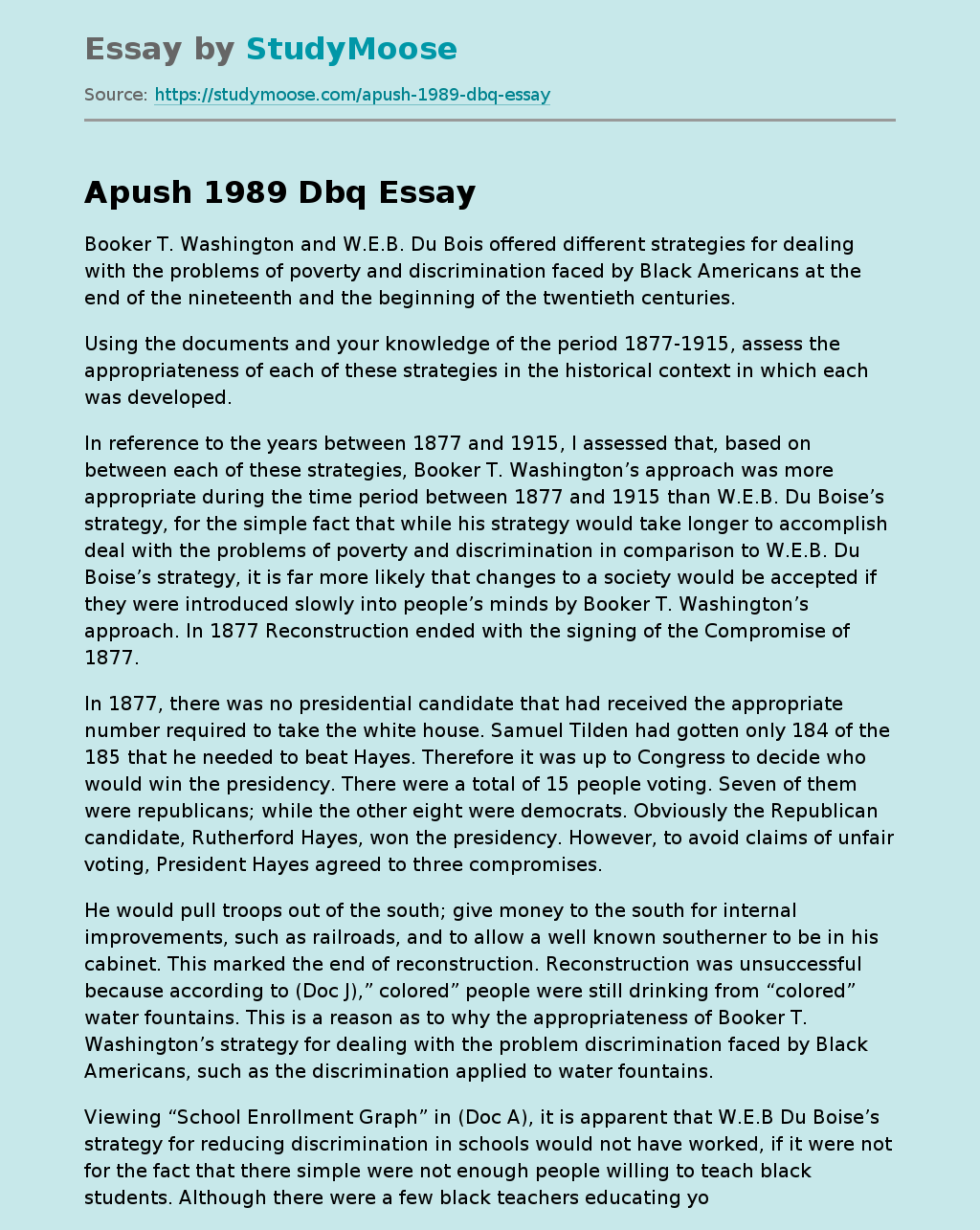