The issue of unemployment is a suffer for the majority of countries in the world and it is clear that the wealthier a nation is, the better it deals with such a case. I think that everything derives from the point that in well developed states people are replaced by machines, robots and computers at work. Consequently they have nothing to do and become jobless . Unfortunately, inventions substituting people are much cheaper in exploitation. However, there are few things than can be done to stop this process and prevent it from evolving .

Don't use plagiarized sources.
Get Your Custom Essay on Unemployment – problems and solutions Just from $13,9/Page

One of many elements causing unemployment is the too high cost of worker’s maintenance. There should be done something about it, until there would be a chance that private investors will employ more functionaries. In addition, however, in this case only politicians are able to act and everything depends on them, as only they are in power to lower the costs.

A useful suggestion for those who are job searching would be to take up more trainings or education, to gain new skills coherent with the needs of a market, what would be possible with a material support from the governments .

As a result people would have proper qualifications for types of jobs available.

Furthermore, the states ought to take care of those who are out of employment and do not leave them alone, especially do not let them let go. A good solution would be to create a kind of groups of support that could have a motivating and supervisory function at the same time. People would feel more confident, motivated and they would share with each other their problems, hopes and ideas.

One final suggestion, that would help, is for governments to create new opportunities for young people , to give them chances for apprenticeships which are certain to provide a better start at career path.

Taking all the things into consideration, the ideas listed by me above are realized in the major part of developing countries, unfortunately they are very expensive projects. That is why the service is differently realized , dependent on the financial capabilities of a particular country. The countries that are doing the worst are those after-communism , where there is not enough money on effective support for unemployed citizens. On the contrary the best are doing countries from west Europe and north America. There the unemployment is the lowest because of essential assistance. In my opinion, there is a possibility to decrease the rate of unemployment, under the condition that the governments do essential corrections and those who are the most concerned here will cooperate and work hard to make the best of them. 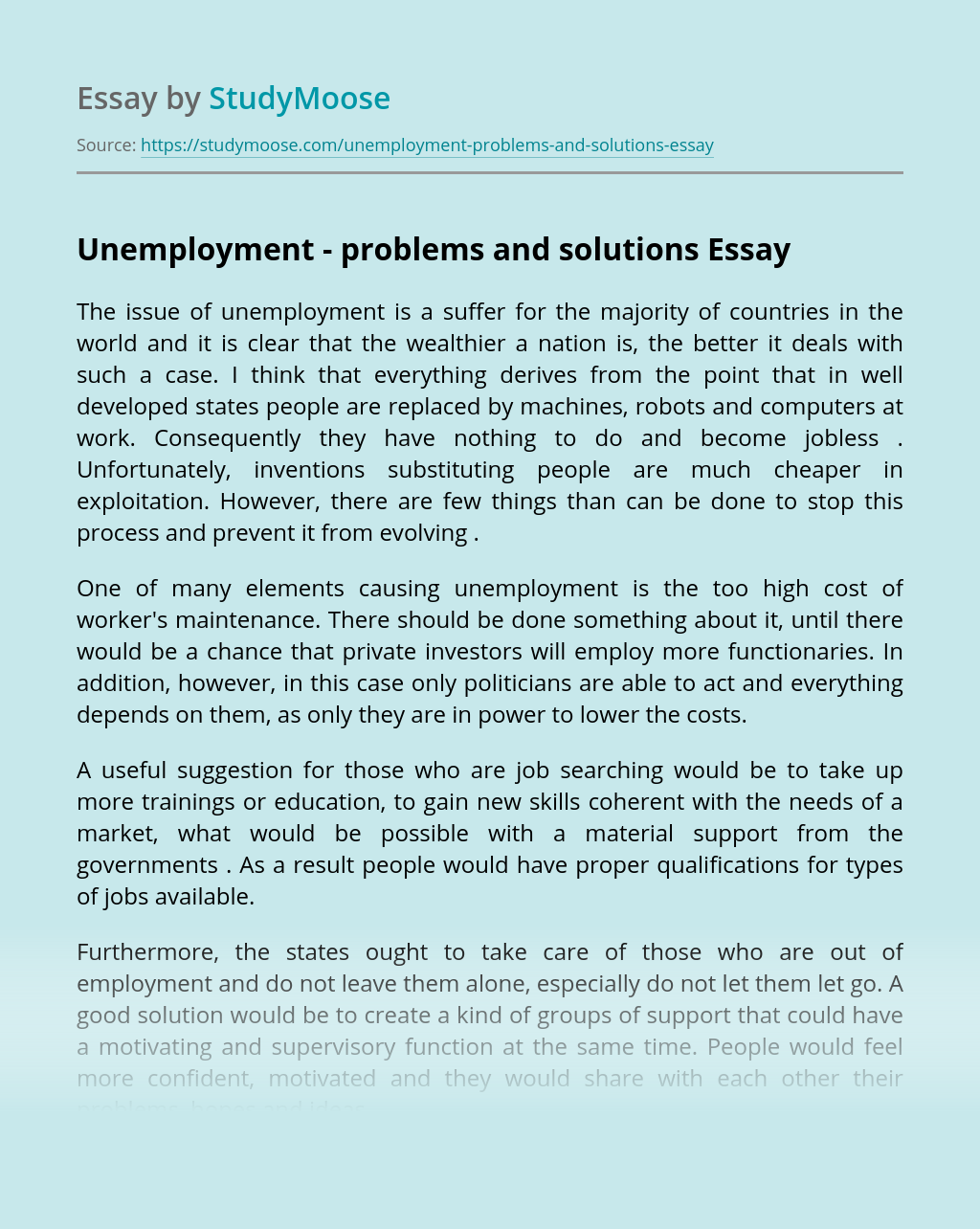 Education is one of the most important things for a society to prosper and be safe which forms the character and intelligence of the individuals around the world. Education makes one able to understand what is happening in the world logically and clearly. Education enables individuals to put their potential to use and make a... VIEW ESSAY

Who was Samuel Colt? He was a legendary inventor from Hartford, Connecticut that helped revolutionize the way the world produced firearms. Colt was born to a family of farmers, his father Christopher Colt was a farmer, however he later stopped farming and became a business man. Meanwhile Colt’s mother Sarah Colt passed when he was... VIEW ESSAY

1. The fast –food industry is changing rapidly. What significant changes do you envision for this industry in the area in which you live during the next five years? As well as this it will explore the issues about what type of multi-nationals should do in order to succeed in the fast-food business. For example,... VIEW ESSAY

My Country is an iconic nationalistic poem about Australia written by Dorothea Mackellar in 1908. Dorothea Mackellar was born in Sydney in 1885. Her education was comprised of private home tutoring until she attended University of Sydney. She travelled broadly with her parents and also become fluent in Spanish, French, German and Italian. She highly... VIEW ESSAY