Relationships Between Grandparents and Grandchildren

The relationships between grandparents and grandchildren vary within every family. Some families develop strong relationships with their grandchildren, while others are seemingly unrecognized by one another. For this interview, I was hoping to come into contact with an individual who has maintained a healthy relationship with his or her descendants. Originally I was going to interview someone outside of my family; however, I realized that if I were to interview my own grandmother, I could demonstrate two different perspectives of the grandparent-grandchild relationship, hers and mine.

Don’t waste time
Get a verified writer to help you with Relationships Between Grandparents and Grandchildren
Hire verified writer
$35.80 for a 2-page paper

I chose to conduct an interview with my grandmother (maternal) whom is an 82-year-old Hispanic woman who primarily speaks Spanish. She was born in Texas in 1931 and currently resides at this location. Her socioeconomic status is middle class. My grandmother is a widow. Her husband passed away 10 years ago this month. She is currently unemployed, and resides in the same home that she shared with her husband and children. She has seven children (six females; one male), eleven grandchildren (five females; six males), seven great grandchildren (two females; five males), and one great-great grandchild (female).

Considering that my grandmother is the first generation, there are still five active generations on the maternal side of my family. I would have liked to talk about my grandmother’s relationship with the fourth and fifth generations of my family, but they presently live in Georgia and unfortunately there is not much contact between them. The only child currently in the fifth generation, her great-great granddaughter, still has not met the first generation because they live so far apart from each other.

She only has the chance to interact with some of them during special occasions such as Christmas, Thanksgiving, New Years, and other major holidays. Even then, not all of the grandchildren are able to attend those events because the majority of them are already adults and have their own lives and responsibilities that seem to have become priority over family festivities. Another one of my grandmother’s concerns is that not all of her grandchildren are able to communicate with her effectively, because there is a slight language barrier.

Although she understands English fairly well and can interpret what her grandchildren are expressing to her, she is unable to speak the language correctly when she is responding to them. Regretfully, many of her grandchildren are not fluent in the Spanish language. She expresses that the reason for this is due to the fact that Spanish is not taught to children while they attend school which never influenced them to learn. Furthermore, since my grandmother has never been employed throughout her life and instead opted to be a housewife, she never felt the need to drive.

Since my grandmother never learned how to drive, she never obtained a driver’s license. I asked her what her primary mode of transportation is and she said that one of the perks to having so many grandchildren is that nowadays children learn how to operate a vehicle at an early age. She only has a few grandchildren that live nearby but she is able to get a ride from them to take her to any appointments she may have or to just run errands. Originally her husband would drive her wherever she needed to go but by now he would be about 88 years old.

She manages to maintain a strong relationship with one of her granddaughters in particular. Her youngest daughter, along with her granddaughter, currently lives within her household. This would typically make it much easier for her to keep a healthy relationship with her granddaughter who is approximately twelve years old, but her daughter that is 39 years old, went through a divorce about 5 years ago and is currently diagnosed with schizophrenia. Both my grandmother and my cousin must support my aunt with her mental disability. Regretfully, this is taking a toll on everyone in the household.

While I was listening to her speak about the situation, I was able to add a follow-up question regarding how the current situation has affected her relationship with her granddaughter. She expressed that the situation has impaired relationships between herself, her daughter, and her granddaughter. She continued talking about how her daughter randomly goes through behavioral outbursts and it is incredibly difficult to calm her down and at times. Sometimes situations can escalate to a point where she and her granddaughter have no choice but to call the authorities because her daughter can be a potential threat to herself or others.

She enjoys being around her granddaughter all the time and it wouldn’t have been possible if it weren’t for the divorce. I believe my grandmother was very lucky that her daughter is the one that maintained custody over the father. “A divorce may strengthen bonds between the grandparent and grandchild; especially when grandparents become more involved with caring for their grandchildren. In cases where contact between grandparents and grandchildren decreases or ends, the result can be traumatic and painful for all concerned. (Milne). I then proceeded to ask her about what kind of activities she participates in with her granddaughter. My grandmother takes the time to sit with her granddaughter and talk about school related things, watch movies together, and share ideas & concepts on things that her granddaughter should paint. As I got to this point into the interview and I asked so much about the grandparent-grandchild relationship, I was curious what my grandmother’s perspective was on being more of a parent than a grandparent.

It took about a year until her granddaughter began to realize that there was something wrong with her mom and began to get closer to her grandmother for comfort and support with handling her mother with schizophrenia. After talking to my grandmother about her perspective on this grandparent-grandchild relationship, I couldn’t help but feel as if she was not being completely truthful with all her answers. I read in an article in USA Today, “Grandparents may feel that they themselves have failed as parents.

They may feel a sense of shame and worry that it says something about the parenting of that (adult) child. “(Facciolo, 2012). I would have liked to go into more detail regarding her thoughts on her daughters divorce, and how she really feels about it. I believe if I were to have gone too much in depth she would have gotten slightly upset because there are a lot more factors regarding her situation at home. Overall, it was interesting getting insight on the grandparent-grandchild relationship which I never really gave too much thought on. 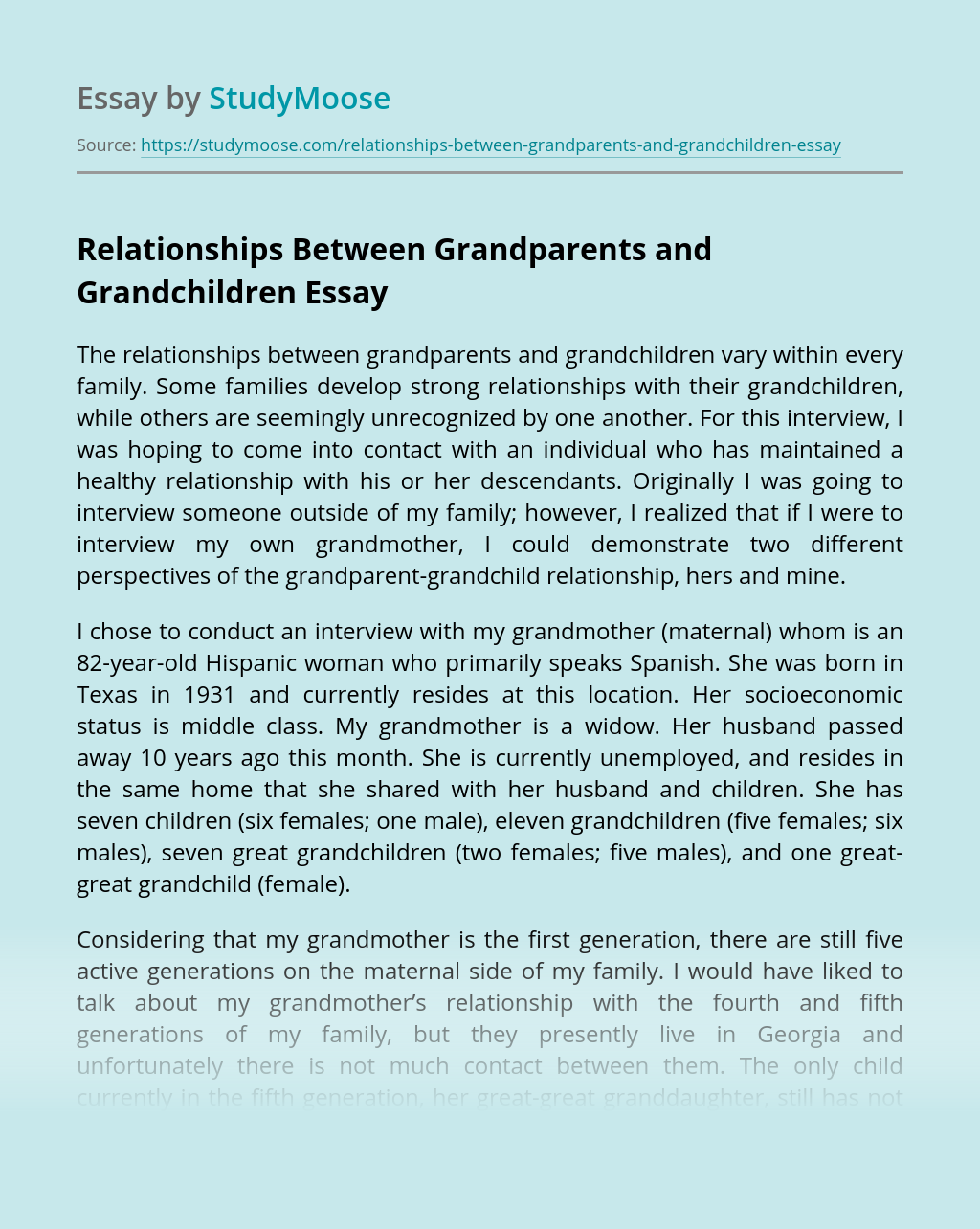 Don’t waste time
Get a verified writer to help you with Relationships Between Grandparents and Grandchildren
Hire verified writer
$35.80 for a 2-page paper
Stay Safe, Stay Original