There has been a drastic increase in recent years of grandparents raising their grandchildren. Statistics have shown that between 1970 and 2000, the number of grandchildren being raised in a grandparent-headed household has actually doubled from 2.2 million to 4.4 million (Hayslip & Glover, 2009). Research has also shown that more than half of of these children are under the age of six (Brintnall-Peterson, et. al., 2009). New Mexico ranks sixth in the nation for the number of grandchildren living in grandparent-headed households (Goodman & Rao, 2007). A substantial amount of research has been done in the last decade to explore the effects, both negative and positive, that this increasing trend has had on grandparents and their grandchildren.

Don't use plagiarized sources. Get your custom essay on
“ Challenges Faced when Grandparents Raise Grandchildren ”
Get custom paper
NEW! smart matching with writer

In the transitional role, parents are away temporarily and are expected to return after a brief period of time (after incarceration or deployment, for example). Custodial grandparents assume responsibility when a parent dies or is deemed unable to care for the child. Co-parenting grandparents are residing with the child and a parent due to financial hardship or other reasons. These grandparents share the responsibilities of raising the children with the parents. For the purpose of this paper, information focuses on transitional and custodial grandparents and the effects that this role has on their financial, physical, social, and emotional well being.

Financial Challenges When a child comes into any home, even in the best of circumstances, there are financial ramifications. This is especially true for grandparents who assume custody of their grandchildren. Even when grandparents feel positively about taking on the custodial role, they report substantial financial hardship and loss of financial freedom (Hayslip & Glover, 2009). In many cases, the dreams and plans for retirement are postponed to meet these financial challenges (Bunch et al., 2007). Additionally, grandparents often draw on savings and retirement funds to make ends meet. One grandmother in Dunne and Kettler’s (2008) study explained that she had spent thousands and thousands of dollars out of her retirement fund to support her granddaughter. Her son made no effort to help financially.

There are also legal ramifications that come with assuming custody of a grandchild. Sometimes the grandparent does not have legal custody of the child, making it difficult to get educational, medical, and financial help without first hiring an attorney. Without documented legal custody, frustration increases when enrolling children in school, daycare, or when seeking medical and dental care (Bunch et al., 2007).

Physical Challenges Current research has shown that grandparents that raise grandchildren experience lower physical health than their non-custodial peers (Kelch-Oliver, 2011; Brintnall-Peterson et al., 2009) due to higher levels of emotional stress (Lumpkin, 2008). In Bunch, Eastman, and Moore’s (2007) study, the research showed that grandparents can feel overwhelmed with addressing their own physical and emotional needs. This is due, in part, to parenting with pre-existing health challenges. However, the research also found that many grandparents report deteriorating health because it becomes difficult to interrupt their new responsibilities to seek healthcare for themselves. Furthermore, this same study conducted a questionnaire for grandparents that addressed health concerns. Out of 23 custodial grandparents, none of them listed their health as “very good.” In another study, the researchers found that grandmothers tend to downplay health issues, but that the physical stresses of their new responsibilities often resulted in an increase in insomnia, hypertension, alcohol consumption, and smoking (Erbert & Aleman, 2008).

One major factor of social isolation for both grandparents and grandchildren appears to be social stigmas attached to the reasons of the custody circumstances (Goodman & Rao, 2007; Dunne & Kettler, 2008). There is often a high level of shame associated with situations involving substance abuse, incarceration, or child abuse.

Changes in custodial arrangements can present social challenges for children as well. When moving in with grandparents, children face the loss of friends, schools, and other family support (Dunne & Kettler, 2008). Social losses can create stress in other areas, leading to behavioral problems and emotional challenges.

Emotional Challenges Stigmas and shame related to the reason of assumption of the custodial role can cause substantial emotional and psychological challenges for the grandparent. Hayslip and Glover (2009) state, “grandparents may also experience loss that comes from a sense of failure resulting from social stigma associated with behaviors of their adult child which resulted in the need to care for a grandchild.” This study also recognizes that custodial grandparents often, but not always, experience a decrease in general life satisfaction. Another study found that depression, stress, and anxiety are significantly higher in grandparents who are raising their grandchildren (Dunne & Kettler, 2008). These findings were particularly notable when dealing with the behavioral challenges of granddaughters and the emotional concerns for grandsons.

The emotional well-being of the custodial grandparents is directly related to their ability to cope with the stress of their situation. Since coping refers to an individual’s capability to manage the demands of an environment, coping skills are crucial for the emotional well being in a home with high-stress circumstances (Lumpkin, 2008). Coping with stress can often be more challenging when the grandparent is caregiving in the shadow of losing their own child. This can cause an overwhelming sense of loss and stress as they deal with their own emotional needs in addition to the needs of their grandchild (Bunch et al., 2007).

Further stress can occur in the grandparents’ marriage after assuming the role of caregiver to their grandchildren. In a study with 23 grandmothers, every one of them reported a negative impact on the relationship with their partner (Bunch et al., 2007). Reasons included having less privacy, less time, disagreements about child rearing decisions, and drastic changes in leisure time. These grandmothers also reported lower levels of satisfaction with themselves as parents when compared to parents in the general population, further adding to emotional challenges.

Behavioral Challenges Many children living with their grandparents exhibit behavioral problems, often due to disrupted family relationships (Brintnall-Peterson et al., 2009). Before coming to live with their grandparents, the grandchildren may have experienced high levels of trauma and family dysfunction, leading to abandonment issues (Kelch-Oliver, 2011).

Brintnall-Peterson and colleagues (2009) put together a web-based fact sheet series to help grandparents that are raising grandchildren with these issues. These researchers argue that there are many resources focused on helping grandparents with legal, school, health, and economic issues but there is a drastic shortage of resources for developmental and relationship challenges. They created a fact sheet series entitled “Through the Eyes of a Child: Grandparents Raising Grandchildren.” This fact sheet offers easy to read, academically useful, and low cost education about behavioral and relational issues for children who are living with a grandparent. The fact sheet focuses on attachment theory to address “interactions among behavioral, cognitive, emotional, interpersonal, and social-contextual dynamics in relationships rather than focusing on any one of these domains.” These researchers believe that attachment theory is particularly helpful when addressing these children because of the parental deprivation, trauma, and loss of development that has already had an effect on the child’s life. This approach also emphasizes the importance of sensitive and responsive caregiving to improve the child’s relationships, especially with the custodial grandparent.

Since children that are living with their grandparents are often struggling in school or experiencing anger and depression, it is critical that custodial grandparents seek help in constructive discipline. Clear rules and boundaries can also provide a sense of security for children that are confused and overwhelmed (Erbert & Aleman, 2008).

Benefits of Grandparent-Headed Households Although raising grandchildren provides many challenges and concerns for custodial grandparents, many grandparents express joy and optimism while raising their grandchildren. Some reported greater feelings of self-esteem and grandmothers expressed a feeling of relief that they no longer had to worry about their grandchildren’s safety once they were no longer in the care of neglectful or abusive parents (Goodman & Rao, 2007). Grandparents also expressed contentment and purpose in their lives, especially when it came to the protection of their grandchildren (Erbert & Aleman, 2008). One grandmother said that she could not imagine her life without her granddaughter in her home and that if her biological mother showed up, she would fight to protect her and not let her go. Another grandmother voiced her commitment to determine herself whether her daughter was well enough to resume custody or visitation.

Perhaps the most compelling argument for the benefits of grandparent-headed households is the findings that grandchildren often begin to achieve their potential in school, sports, music, or art once they feel safe and stable (Dunne & Kettler, 2008). Grandparents expressed a deep sense of pride in their grandchildren, and themselves, during interviews with Dunne and Kettler (2008).

Conclusion Present research indicates that are there are many challenges when it comes to grandparents raising their grandchildren. Although there can be financial, physical, social, and emotional repercussions for grandparents and their grandchildren, sometimes it is the best option in an otherwise impossible situation. Research shows that children appear relatively well adjusted and happy living with their grandparents (Kelch-Oliver, 2011).

Since it is apparent that the numbers of custodial grandparent households will continue to rise (Goodman & Rao, 2007), ongoing support is critical for grandparents. Social and emotional support is invaluable and grandparents should seek out support groups to help them feel less alone in raising their grandchildren. Education about various parenting approaches is also beneficial. Better access to educational resources would help provide clearer direction when it comes to behavioral and emotional challenges that grandchildren face. If the grandparent feels better equipped, it would drastically improve overall feelings of contentment in both the grandparent and their grandchildren. 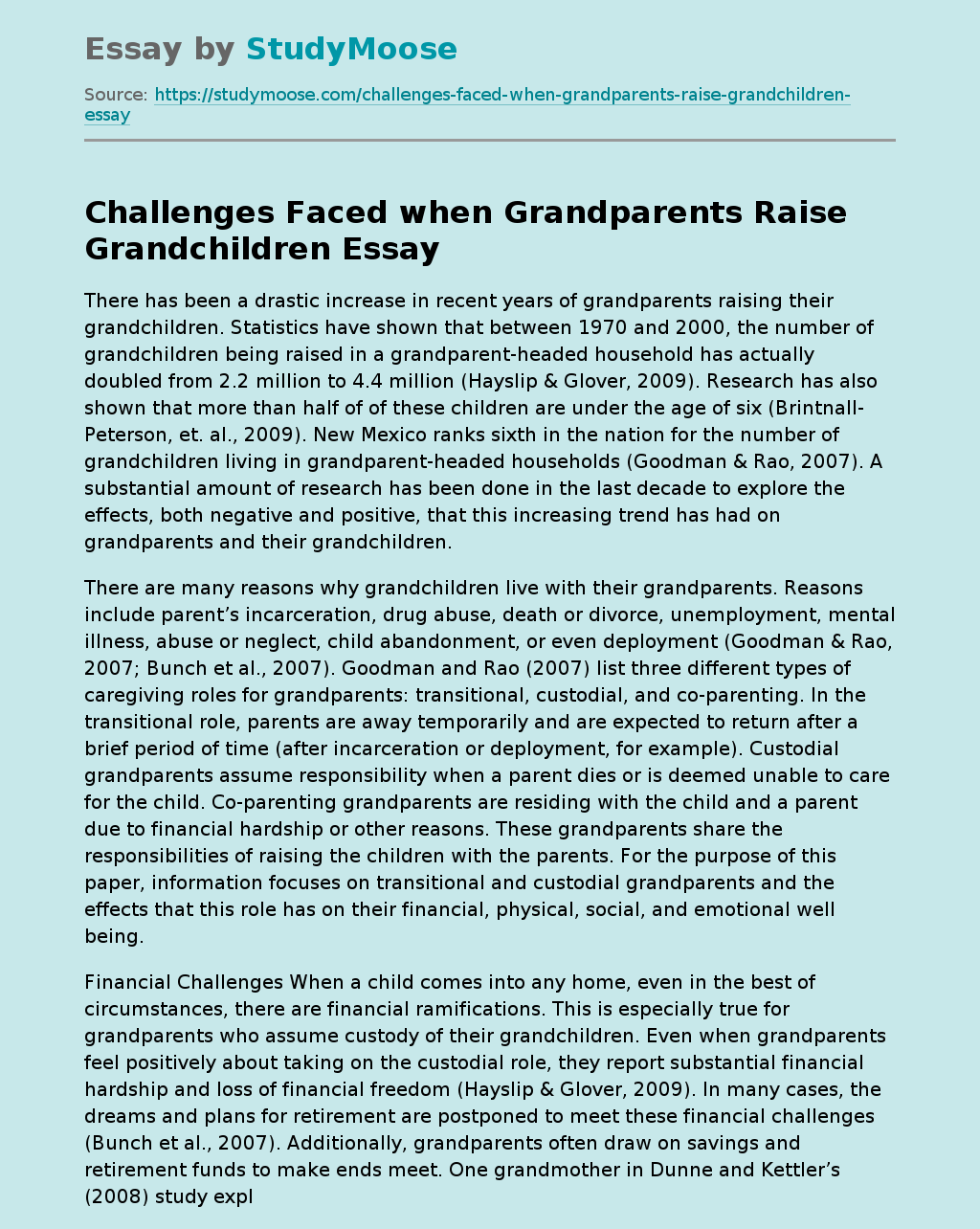