Relationship Dynamics in The Perks of Being a Wallflower

“My life is an afterschool special.” These words, spoken by the character, Patrick, summarize the dynamics of the relationships portrayed in the movie, The Perks of Being a Wallflower. The movie is a coming-of-age story about Charlie, a boy without any friends, as he enters his first year of high school. While the movie is geared toward young adults, the message portrayed about relationships touches everyone: We accept the love we think we deserve. In the movie, Charlie has a crush on a fun-loving, party-girl, senior, Sam, who is already dating an older boy in college.

Don't use plagiarized sources. Get your custom essay on
“ Relationship Dynamics in The Perks of Being a Wallflower ”
Get custom paper
NEW! smart matching with writer

Though they become close friends and share intimate experiences and feelings with each other, Charlie never asks Sam out.

The movie upholds traditional high school relationship stereotypes from the Sadie Hawkins dance to prom photo shoots but it also illuminates the uniqueness of every close intimate relationship. It is best described by Charlie when he says, “I know someday our pictures will become old photographs,” like how a moment captured on camera can be seen but never experienced the same way again.

Through the dynamics of Sam and Charlie’s relationship, I will show how The Perks of Being a Wallflower depicts a genuine, true love story that represents universal elements everyone experiences in close relationships.

Before his first day of high school, Charlie writes, “I am both happy and sad and I’m still trying to figure out how that can be.” He begins his first day alone, eating by himself in the cafeteria, never raising his hand in class, and keeping his head ducked down in the hallways.

One night he decides to go to a high school football game, where he first meets Sam and her stepbrother, Patrick. Together, they watch their school football team win the game and Sam and Patrick invite Charlie to the diner with them afterwards where they talk about their favorite music and what they want to be when they grow up.

This act of sharing positive experiences together that benefits the progression of a relationship is called capitalization
(Reiss, Carmichael, Caprariello, Tsai, Rodriguez & Maniaci, 2010). Sam and Patrick share the experience of Charlie’s first party, his first school dance, and even the first time he gets high. The most theatrical example of capitalization in the movie is when the three friends are driving home and the song, “Heroes” by David Bowie comes on the radio and Sam demands that Patrick drive through the Fort Pitt Tunnel so she can stand in the back of the pickup truck while blasting the song over the radio. Charlie is so stricken by the feeling of belonging that he looks at Patrick and says, “I feel infinite.”

Sam and Charlie become closer when they offer each other the comfort of knowing that they are not alone. Their relationship grows even deeper when they learn that they can share their experiences and feelings with each other without being rejected. This happens the first time at Charlie’s first high school party. Charlie, while he is stoned, confesses to Sam that his only friend, Michael, shot himself last spring. Sam shares what Charlie told her with Patrick and they later toast Charlie at the party in order to welcome him as their new friend in front of everyone. Charlie looks as if he is about to cry because for the first time, he feels like he belongs somewhere.

As their intimacy progresses, Charlie demonstrates his affections for Sam by giving her gifts and offering displays of affection known as maintenance behaviors in relationships (Stafford, 2003). For example, he makes her a mixed tape themed after the night that they drove through the tunnel together even though he couldn’t find the special song that made them feel “infinite.” Charlie also offers to help Sam study for the next SATs after he sees how disappointed she is when she receives her scores. Charlie’s self-disclosure and efforts to display affection encourages Sam to share the more private parts of her life without fearing she will be rejected by him. Sam’s moment of self-disclosure is after the Christmas party, when she invites Charlie up to her room for the first time to give him a thank-you present for helping her study for the SATs. On her desk is an old typewriter with a bow for Charlie, because she knows that Charlie wants to be a writer someday. When Charlie sees the gift on her desk, he says with
disbelief, “You got me a present?”

The glow of happiness off of Charlie’s face demonstrates the physiological reaction of expressing gratitude in relationships. Acts of gratitude are known to significantly increase relationship satisfaction (Demoss, 2004). Not only does Sam display gratitude towards Charlie, but she lets him into her room, her private space where none of the other party guests had been invited to go. In a moment of closeness, after Charlie confesses he’s never kissed a girl, Sam shares with Charlie that her first kiss was when her dad’s boss molested her at the age of ten. Charlie responds with validation, telling her that the same thing happened to his aunt Helen and that she turned her life around. When Sam comments that his aunt must have been a great woman, Charlie responds, “She was my favorite person in the world, until now.”

Sam, overwhelmed with tears, tells Charlie that she knows that he knows she has a boyfriend, but she wants to make sure that the first person that kisses him, loves him. Charlie nods, and Sam leans in and kisses him. For the first time she says, “I love you, Charlie.” And he responds, “I love you too.”

Charlie and Sam do not become a couple, but they continue to teach each other that they are deserving of genuine love. The greater the impact close relationships have on one’s self-image, the greater satisfaction one will receive from the relationship (Mattingly, Oswald, Clark, 2011). Sam and Charlie do this by perpetuating a positive self-image of each other, increasing the happiness they receive from spending time together. Sam does this for Charlie by acknowledging that he is not crazy and that he is someone worth being friends with. Charlie does this for Sam by encouraging her to apply to colleges and offering the emotional support that he believes in her.

Sam and Charlie have a genuine concern for each other’s well being. These compassionate, supportive goals are another example of how responsive they are to each others’ needs (Conovello & Crocker, 2011). Charlie doesn’t just give Sam his most beloved gift because he thinks she’s pretty and wants her to like him. He gives her the Beatles record his deceased aunt Helen
left him because he truly cares about her, and he wants her to be happy. It is for the same reason Sam gives Charlie his first kiss. They have goals to meet the needs of each other.

However, like all individuals and relationships, Sam and Charlie are not perfect. Despite the genuine love and affection Charlie offers her, Sam continues to date her boyfriend who is cheating on her, and Charlie continues to date Sam’s friend, Mary Elizabeth, even though he doesn’t have romantic feelings for her. After Sam finally dumps her boyfriend and Charlie is no longer dating Mary Elizabeth, Sam confronts Charlie and asks him why he had never asked her out. Charlie responds that he didn’t think she wanted him to and that he just wanted her to be happy. Sam replies, “You can’t just put everyone’s lives ahead of yours and think that counts as love…I don’t want to be someone’s crush, I want people to like the real me.” Charlie fidgets nervously and after a long pause he tells Sam, “I know who you are,” and he tells her that she’s beautiful and he kisses her. This moment suggests that the impact their relationship had on their self-esteem, brought them both to a point where they could accept the love that the other thought they deserved.

Despite all the efforts Sam and Charlie made towards the intimacy of their relationship, the movie does not end happily ever after. The next day Sam leaves for college, and the intimate sexual experience between Charlie and Sam triggered Charlie to have flashbacks of his aunt Helen molesting him as a child and he is hospitalized in a psychiatric ward. Charlie is left alone wondering how it is possible to be happy and sad at the same time and how someone he loved and idolized like his aunt Helen could have done something that hurt him so badly.

The Perks of Being a Wallflower is a love story that is told the way Sam described rock love ballads to Charlie: both kitschy and brilliant. The story uses the general setting of stereotypical high school drama to portray the human experience of close relationships. Charlie experiences the euphoria of first love and also the pain of devastating heartbreak. And just like old photographs, whether the setting was a high school dance or a
social at a retirement home, the relationships in this movie are relatable to anyone who views them, while also existing as independent unique experiences that will never be lived the same way twice. Even though the movie doesn’t end with Charlie and Sam as a happy couple, it still ends with an uplifting scene reuniting Charlie, Sam, and her brother, Patrick.

Charlie is standing in the back of Sam’s pickup truck while they drive through the Fort Pitt Tunnel and his voice narrates, “I know these will all be stories someday and our pictures will become old photographs, but right now, this is happening.” He acknowledges that the experience of human relationships is something that everyone will experience and that all of the moments shared will become memories, but Charlie shows that the energy that comes from love lives in the moment where you feel like you are the only one who has ever experienced it before. “That one moment…when you’re listening to that song on that drive with the people you love most in this world…I swear, we are infinite.”

References
Canvello, A., & Crocker, J. (2011). Interpersonal goals, others’ regard for the self, and self-esteem: The paradoxical consequences of self-image and compassionate goals. European Journal of Social Psychology, 41, 422-434.

Relationship Dynamics in The Perks of Being a Wallflower. (2016, Apr 15). Retrieved from https://studymoose.com/relationship-dynamics-in-the-perks-of-being-a-wallflower-essay 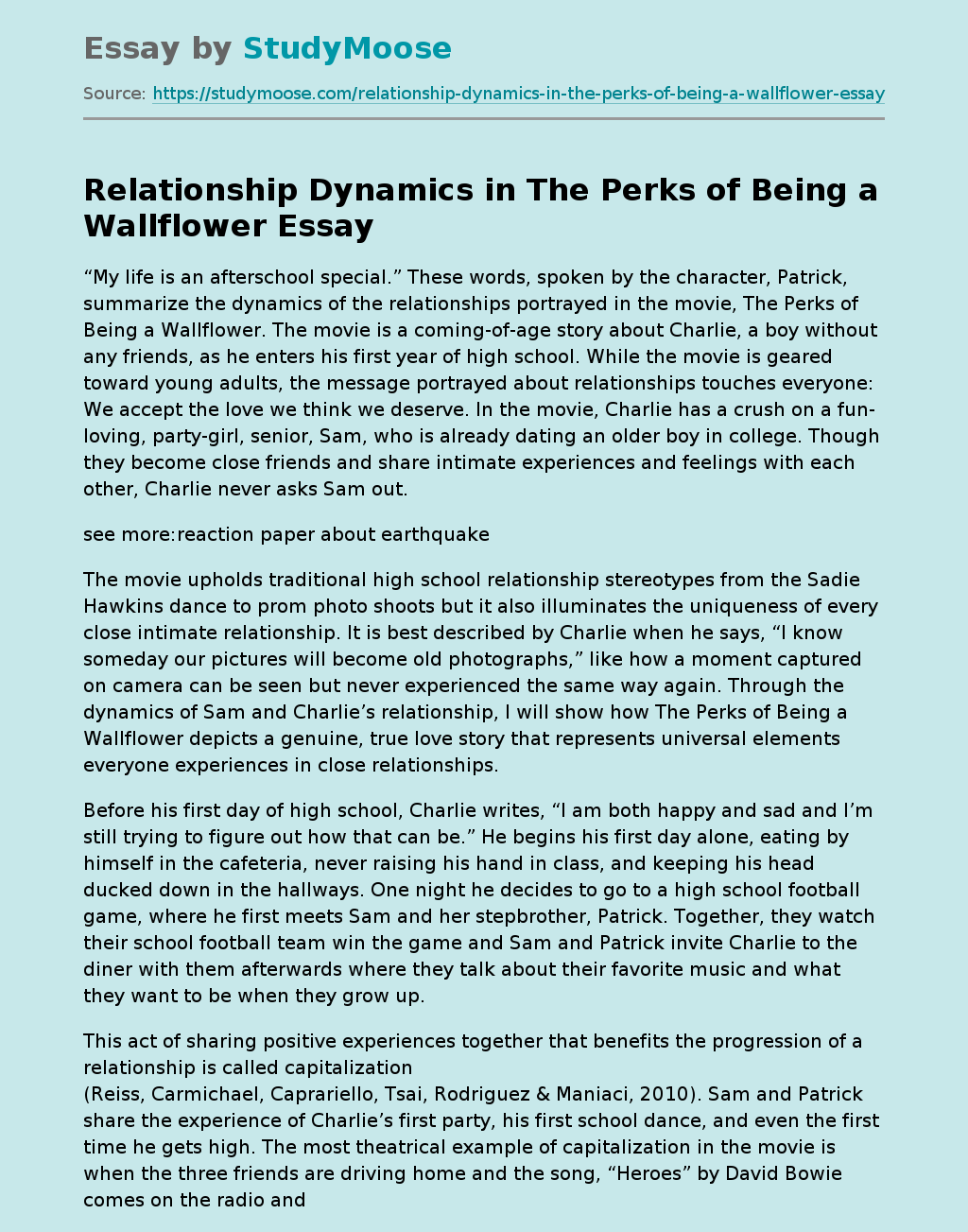