Relationship between Private and Public Police

In the beginning before private security it was the responsibility of the public police to protected the society and property within their jurisdiction that public law enforcement served. In today’s society public police work hand and hand with private security on a regular basis, either in public or in private functions. Also in today’s society you see off duty cops working as a part-time security officer at a local retailer or safeguarding assets for a company. Certain cities have giving Security officers within certain jurisdiction, such as Boston the power to make arrest do to the lack of public officers availability.

Don't use plagiarized sources. Get your custom essay on
“ Relationship between Private and Public Police ”
Get custom paper
NEW! smart matching with writer

The major thing that has changed over time for both public and private security and public servants is the training they must go through before entering the streets or the property they are protecting. The training and education and public officer must get is very hard and they must pass the training and schooling to be hired within the department, it is more in depth compared to what a normal security officer must go through.

Security officer now half to go through a lot more training then they use to they must be able to handle people and deal with people on a daily basis. The training for a security officer has really change over the years it’s not only getting a drug test and background check some security companies not do extensive training because of the public views the security. Companies have chosen to educate the security officer because of liability problems that have occurred and exist in the workplace as a result companies have trained professional individuals to work within private security.

This is not just happening with security guards you also have private investigators who have started taken over the local law enforcement role in investigating murders, rapes, and abductions. Due to not enough funding for public law enforcement, companies like Target have open up their own investigation center that investigate crimes with in there company without having local law enforcement do it for them. Private security companies can now investigate crimes side by side with the police department and also work longer on the case compared to the police department because of funding. Private investigators have been known to build cases against criminals that will support the laws case or it can work the other way and the defendant can hire a private investigator to support their case to prove there innocent.

There is a conflict between public and private space, which in fact can influence the relationship between private security and public police. Police at any time can detain someone that is a threat to someone or can even question them after being apprehend. Private security on the other hand cannot employ any police powers and may only detain and arrest as a citizen. Also Public police must have probably cause to search someone, while private security is exempt from violation an individual 5th amendment rights.

Relationship between Private and Public Police. (2016, Mar 31). Retrieved from https://studymoose.com/relationship-between-private-and-public-police-essay 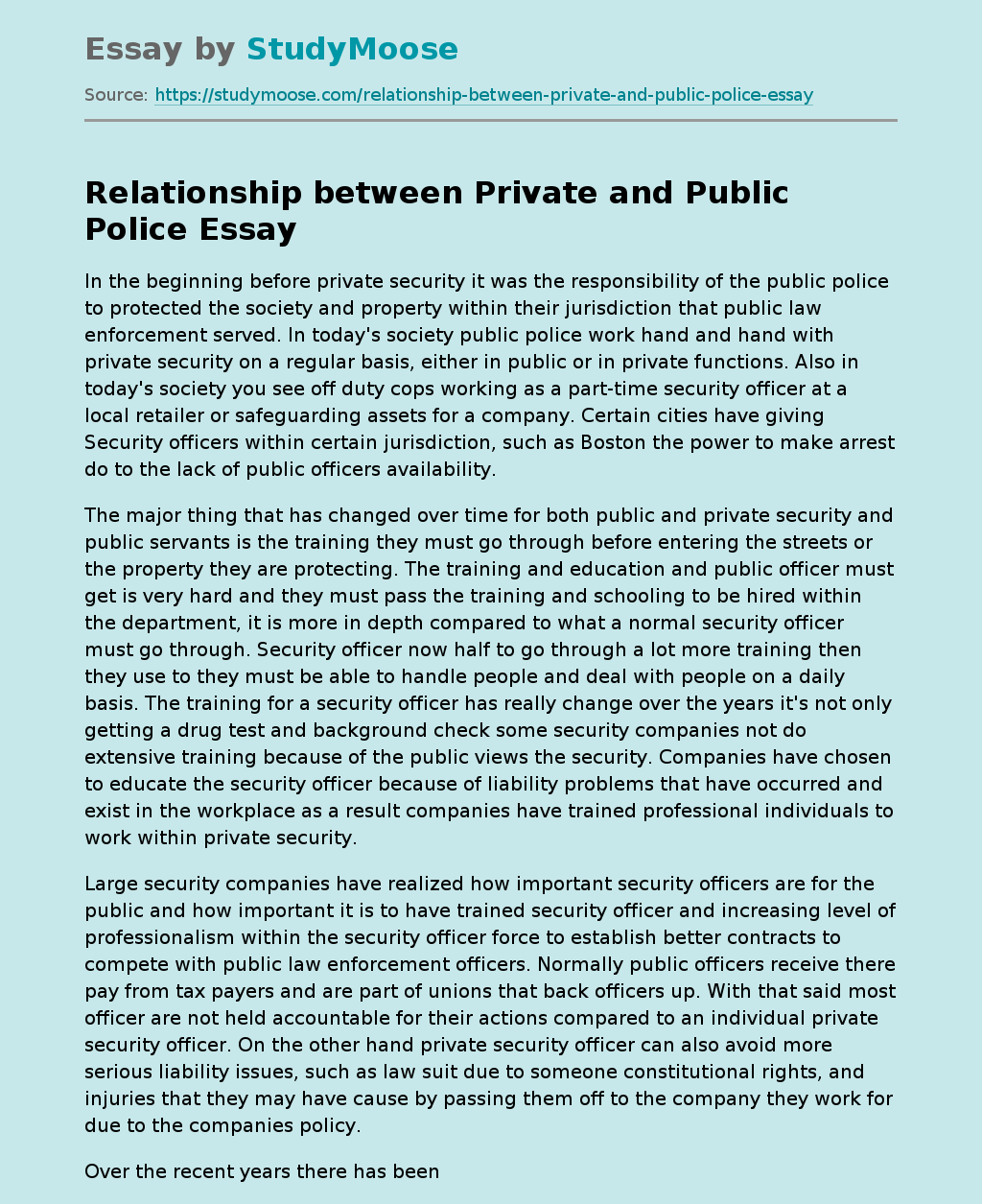