2. How were the reform movements of 1820-1860 in the United States related to the growth of industry and urban life?

During the years 1820-1860, America has received a wave of social reformation movements that were in correlation with the growth of industry and urban life. This time period, also known as the antebellum era (time period before the Civil War) brought movements such as: the temperance movement (1826-1840’s), the movement for public asylums (1820’s and 1830’s), the public education movement/reform (1820-1860), the women’s rights movement (1850’s) and the anti-slavery movement.

Don't use plagiarized sources. Get your custom essay on
“ Reform movements of 1820-1860 in the United States ”
Get custom paper
NEW! smart matching with writer

Many of the people that drank liquor claimed that it relieved their stress from working too much in the factories. However, once those people got home, they caused family problems, and sometimes cause crimes. This urban problem was a big dilemma, so people organized themselves and formed a temperance movement to ask for the pledge of people to stay abstinent.

Another movement that arose due to urban problems was the amount of people that were homeless and the ones that had disabilities. Throughout 1820-1840, urban life was full of crime because of the number of homeless people that robbed others. There was also a big number of homeless people living on the streets because the city could did not have enough apartments to allow people in. The number of people that had disabilities also caused a problem in urban life because they had a hard time struggling to survive. That is why people formed the Asylum movement. This movement called for the building of shelters for the homeless, schools for the disabled people and medical centers for them. This movement helped improve urban life to become a more tranquil place.

The women’s rights movement arose due to the way they were treated by men. However, the women’s rights movement didn’t begin with the snap of a finger. Since many women were busy taking care of the house and their children, they didn’t have time to involve themselves in movements to support their rights. However, when the Industrial Revolution came to America, men left home to work for salaries, which meant they had less time to spend with their wife. With the addition of birth control, women had fewer children, which meant that they had time for social reform. After entering this “phase” women came to a realization that they resented the way men neglected them to secondary roles (which was to take care of the house and children) in the movement and preventing them from taking part of anything that had to do with politics. This sort of thinking can be classified as an urban way of thinking because in an everyday urban day, the mother would stay at home while the father would go work to get his salary.

Although women fought for their rights during the 1850’s, their movement was obscured by the anti-slavery movement. This movement arose because the industry of America was treating them bad. In the South, many slaves were put into hard labor because around the 1820’s to 1830’s, there was a very high demand for people wanting cotton. The anti-slavery movement was supported by the Second Great Awakening (a time period in America in which religious enlightenment flourished). The Second Great Awakening brought over that slavery was a sin, and since many people were very religious, they didn’t like the fact that they were sinners (urban life ideals). The anti-slavery movement also brought abolitionists together to fight for their cause and it also brought abolitionist newspapers such as _The Liberator_. Many people also didn’t like the fact that slaves were seen as business (industry), which gave them another reason to form the movement.

The antebellum era brought many social reforms to America, and they were all in relation to the way the industry was growing and the way people lived in urban life. The temperance movement was in response to the crimes and the alcoholics that arose during the 1830’s; the movement for public asylums arose because of the number of needy people that were homeless and disabled; the women’s rights movement arose due to the way they were treated by men in their urban life and the growth of industry; and the anti-slavery movement was in response to the unfair treatment of slaves, the idea that slavery was a sin, and the fact that slaves were seen as a market. All these reforms arose because the people were reacting to the things that were happening to urban life and the growth of industry, and in my opinion, I think all these reforms were made for the best of mankind because they led to a safer and secure life. 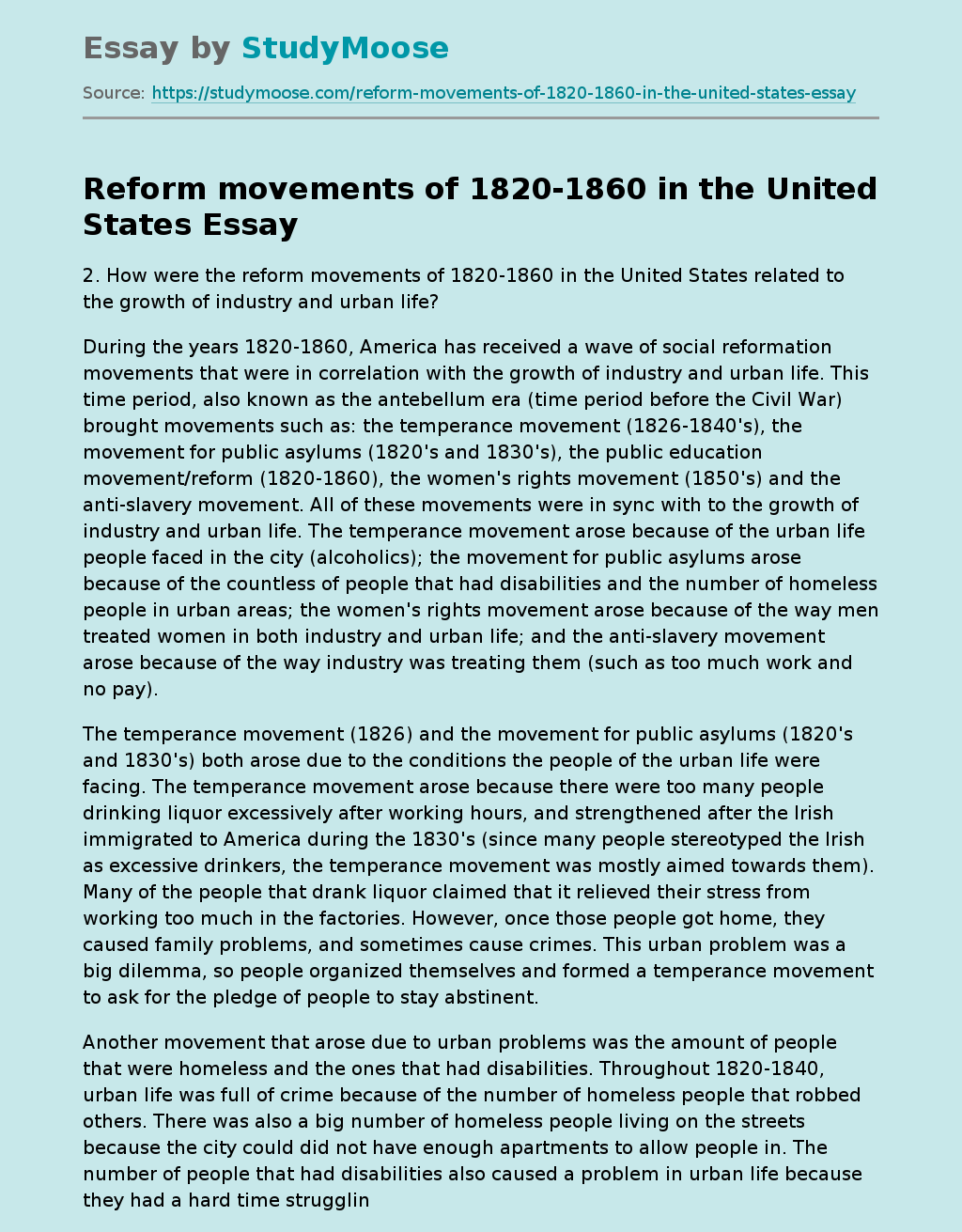