Learning to read is the most important thing a child will ever learn. We learn to read to read to learn. Yes we learn through experience, but the majority of what we learning comes through reading. Developing a love for reading will lead to a success educational experience. My experience with teaching the lessons from CD 1 & 2 was for the most part fun. I used my seven and nine year old daughters. Initially I thought my nine year old would be bored with it, because she is an accelerated reader.

Don't use plagiarized sources.
Get Your Custom Essay on Reflective Reading Just from $13,9/Page

After we really got into the lessons she was rediscovering things about foundational reading that she had forgotten. On the first CD, I think the song presentation of the letter sounds helped to hold the seven year olds interest. The activity that had the children sliding sounds together by using the cards is called blending sounds to make whole words. They also used the work book to do different activities.

The first lesson talked to them about the origin of our alphabet, which they both found it interesting.

With CD 1, we basically repeated skills learned over and over again. The girls were not familiar with the term engine sounds, but they gasped the concept and followed along without a problem. I observed that with used this kit with children who can already read, still has benefits. Reflective Paper 3 My husband and I sometimes have to correct the girls in their speech, because they tend to say things in the same way they might here a friend say them which most of the time is incorrect. The activities from the kit present the correct sounds and pronunciations of words.

On CD 2, we spent extra time saying the sounds as quickly as we could by following the disc. On CD 2 it gave even more history for the girls to learn. They learned that our language came from the Romans who took it to the British Isles where it ended up being the English language we speak today. What I did find difficult was that we had a little trouble following, because I was not sure which cards the disc was referring to. Once we got back on track, the girls played the shortcut game for a very long time and seemed to have really enjoyed it.

What I liked the most about the shortcut game was the repeat ion. By saying the sounds over and over again helps the student remember. One other thing that stuck out about this particular exercise was that she encouraged the children to use multi senses. The more senses you use the more you learn. We ended our lesson activities from the book learning to use the th, sh, ch, and wh sounds. In this exercise the girls used these sounds by sliding them together to make a word. The disc talked Reflective Paper 4 about putting up walls, but I did not quite understand the concept.

Nevertheless, the children complete CD1 & CD2 and are excited about the upcoming lessons. This paper documents the progress of my students using CD 3 and 4. As you know I am using my two daughters who are seven and nine year’s olds. We started off reviewing what we previously learned from CD 1 and 2. The repetition has turned out to be the best way to for the students to remember what they have learned. Even though my students already know how to read, they are very interested and engaged in the lesson. The songs and the music are very instrumental in holding their attention.

As we moved through the first disc the students learned how to break words into syllables and identify them by clapping as they said the word. Several games were implemented in this session that focused on making words using sounds. Using shortcuts to make words was an easier way for the students to make words. They really enjoyed the game, and played for quite a while. They played a tick tack toe game where they used sounds to find words with the same sound. I played this game with the girls and it Reflective Paper 5 never became boring.

In the earlier discs, the girls learned that the 26 alphabet have 44 sounds, and CD 3 they reviewed these sounds. Then they moved on to using those words to make sentences. Learning to read fluently depends on the student being able to turn words into sentences. She explains to the students about reading from left to right, and how important it is to being a successful reader. On CD 4 the students learned how to enunciate the words properly and not guess. It is important to read what you see and not what you think. The only way to be an independent reader is to have a strong foundation.

Disc 4 advanced us into vowels and their sounds. The students learned what sounds vowels make and when. They learned that when two vowels go walking, this first one does the talking. I thought this was a great way to remember the vowel sounds, otherwise they could be tricky. However, the ur sounds were a bit difficult even for my daughters. It’s just something they have to remember. The most interesting thing I think was they learned how different countries pronounce letters differently than we do. Knowing the origin of a word helps with the spelling and pronunciation.

My Reflective Paper 6 daughters related this concept to a movie they saw called Akeelah and the bee, which the movie was about a spelling bee. Overall, the girls never where bored with the games or the lessons, and ready to move on to CD 5 and 6. This paper documents the progress of my students using CD 5 and 6. As you know I am using my two daughters who are seven and nine year’s olds. We started off reviewing what we previously learned from CD 3 and 4. This time we had a few other children who joined in on the fun.

What I learned about this program is that it builds on the previous lesson, so it’s hard to jump in the middle of the lesson. The repetition is the best way to for the students to remember what they have learned. Even though my students already know how to read, they are very interested and engaged in the lesson. The songs and the music are very instrumental in holding their attention. As we moved through the first disc the students learned how to clap, buzz, and exercise through the vowel sounds sometimes the vowels don’t follow the rules.

They are called outlaws, because they follow their own rules. Several games were implemented in this session that Reflective Paper 7 focused on making and reading sentences. They learned about i, y, e and how y is a cousin to i. They learned that once a student learns to read they can teach anyone to read. When reading, students need to practice reading for accuracy. In the earlier discs, the girls learned that the 26 alphabet have 44 sounds, and CD 5 and 6 they used these sounds. Reviewing sounds until they become automatic is another important key.

The more senses the student uses the faster they get in sounding out words and reading sentences. She explains to the students about reading from left to right, and how important it is to being a successful reader. On CD 6 she stressed that we learn to read to read to learn. Majority of our learning experience is from reading and the other portion is gathered from the use of our senses. At this point the students are advanced in their decoding and sounding out words, so the CD moves them into capitalization of words.

They learned which words need capitalization, and how to find the meaning of a word by the uses of the dictionary. Many of the activities that the students worked on were from the work book, and they remained engaged in Reflective Paper 8 the lesson the entire time. The best part of the lessons on CD 5 and 6 was the instruction on how and when to use certain combinations; for example au, aw, ou, and ow. Even though the new group of children that heard the lessons for the first time couldn’t participate, they still enjoyed listening and watching my daughter go through the lessons.

The final CD 7 summed the phonics lessons up. It talked about silent letters like k and w. It helped the students understand sounds like ough and tion. In the English language these sounds have to be learned and understood in order to speak the language properly. These several weeks of phonics have been very interesting, and the students were refreshed and learned some new things. My experience with teaching Action Reading is one that I will not forget, and will use in the future. Reflective Paper 9 References Eller, J. (2000). Action Reading Fundamentals. Arizona. Action Reading, Inc. 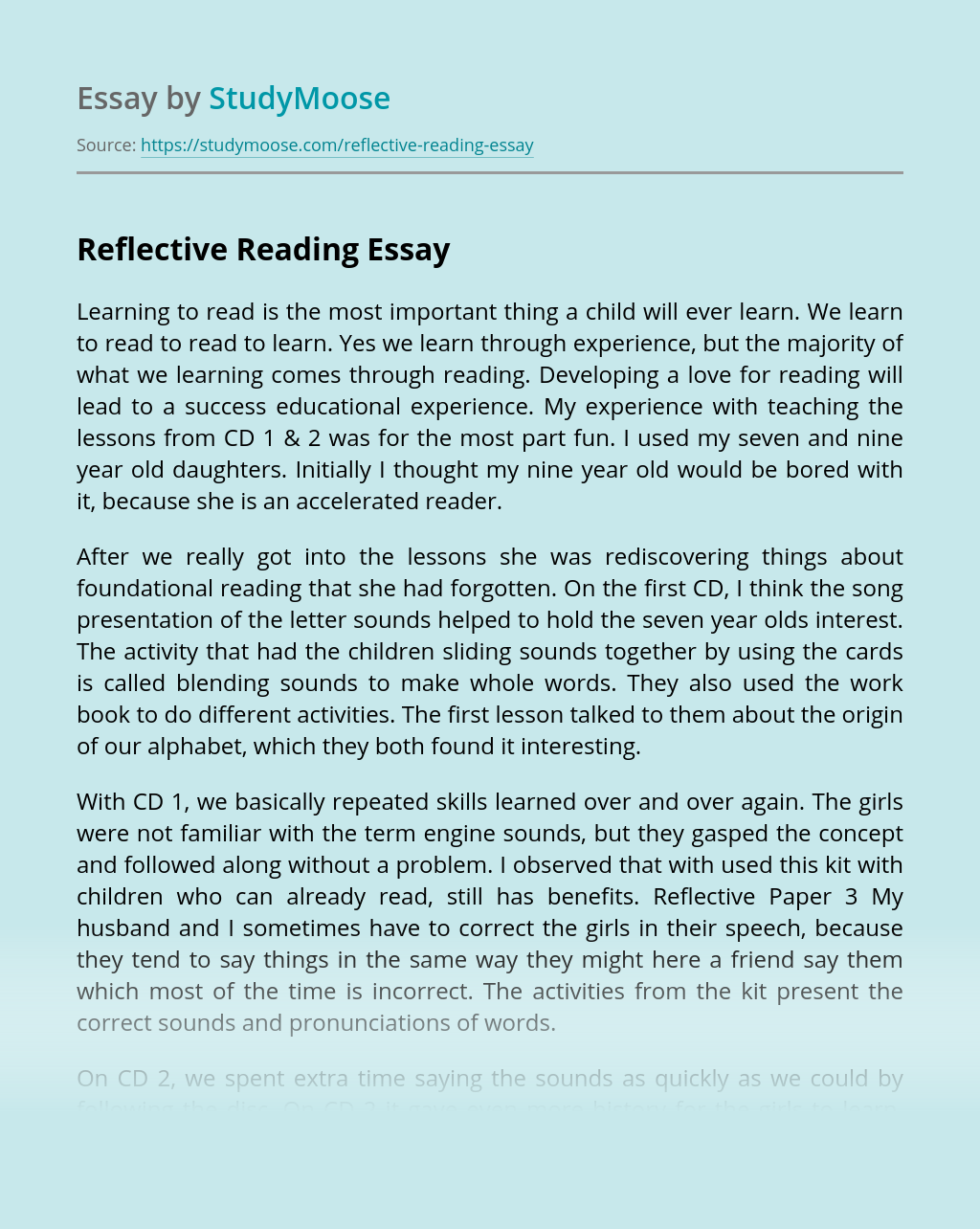 The Mayans, The Aztecs, And The Incas Civilizations

Rate this post From 250 A.D. to the late 1500’s A.D., three advanced civilizations, the Mayans, the Aztecs, and the Incas controlled Central America and South America. Each of them was different but all shared some of the same qualities. They all were civilizations that had a daily life than revolved around religion. Their religions...

Rate this post In the short story called SOLDIER’S HOME, by Nobel Prize winning author Ernest Hemingway, the main character Krebs has just returned from World War One in Europe. This is the perennial story of the hero leaving on some quest, only to return home finding everything different. Therefore, identity conflict holds the key...

Rate this post Summary – “Dry White Season” Adam Simon – CGW 4U1 Dry White Season was what I felt to be an exemplary interpretation of how native South Africans truly condemned the immoral Apartheid political system of the mid 1900’s. Though the film was quite graphic, explicit nature seemed necessary to prove how racial...

Rate this post Selfness is a virtue of humanity and generosity is an offshot of selfness. It is the virtue of bringing a smile onto other peoples faces. For the most part, it is good to be generous. In the Prince, Machiavelli argues that there are boundaries on when and to what extend a prince...

Rate this post In the article, “Hidden Intellectualism,” Gerald Graff discusses the topic of book smart versus street smart. Being street smart means having interest in other activities more than in school work, while being book smart is the complete opposite of that. Graff believes that having the personality of a street smart person can...