Recently, various news outlets have reported on privacy concerns associated with Amazon’s Echo Dot Kid, a smart speaker technology created for children. As it turns out, a number of parents and consumer advocacy groups, have come out stating that this device violates the Children’s Online Privacy Protection Act (COPPA); one of the few federal privacy laws established in the US (Kelly, 2019). This act was created to protect the privacy rights of children ages 13 and younger and imposes privacy requirements on services and websites that target children.

Don't use plagiarized sources. Get your custom essay on
“ Recently various news outlets have reported on privacy concerns associated with Amazon’s ”
Get custom paper
NEW! smart matching with writer

The parents and advocacy groups involved in this case argue that the Echo Dot Kid illegally retains all data provided to it, much of which pertains to children. Advocates argue that the device is designed in such a way as to retain all data provided to it, making it impossible for users to delete any personal data it might have collected. Due to these suspected privacy violations, a complaint has been filed with the Federal Trade Commision, asking that an investigation be performed on Amazon as well as the smart speaker device in question.

Those involved in this complaint include 19 consumers and public health advocates and is being led by the Consumer Federation of America, the Center for Digital Democracy, and the Campaign for a Commercial-Free Childhood (CBS/AP, 2019). These groups argue that the true purpose of the Echo Dot Kid is simply to obtain countless amounts of information, and in so doing so, does not properly delete said information within a reasonable amount of time.

One parent has even posted a video online showing how the device retains data even after the parent had requested, via their smartphone, that said data be deleted. As it turns out, the only true way to have any data deleted from the Echo Dot Kid is by taking upon oneself to contact Amazon customer service and request that the specified data be deleted. This is one of the primary complaints brought against Amazon’s Echo Dot Kid, yet there are others complaints as well. The Echo Dot Kid is designed to provide parents with parental controls via its FreeTime software. Parents are given the ability to manage how their children use the device, such as setting time limit restrictions and controlling what skills and services can be accessed; it even allows parents to view their kids activities.There’s also a premium version of the FreeTime software, called FreeTime Unlimited, which provides additional content such as audio books, ad free, kid friendly radio stations, as well as additional skills provided by well known kid friendly sources, such as Disney (Lomas, 2019). Yet, for all the restrictions established to make the device kid friendly, advocates argue that Amazon does not adequately inform parents as to what data the Echo Dot Kid will actually collect, how they will use said data, and which third parties will be allowed to access to the data as well. It is important to note that of the over 2000 skills provided by the Echo Dot Kid, most of which are developed by third parties, approximately 85% do not provide a privacy policy. Coming back to the Children’s Online Privacy Protection Act, parents argue that Amazon provides rather confusing and unclear information in relation to obtainment of consent for the purposes of collecting children’s data on the behalf of third parties; an obligation established under COPPA. Amazon’s Children’s Privacy Disclosure policy even states within itself that it does not apply its policies to third party services and skills (Lomas, 2019). Instead, Amazon advises parents to review the policies of any third party skills their children may use, which as stated previously, is only possible with the about 15%, as only that small percentage actually provide a privacy policy (Lomas, 2019). Amazon’s Children’s Privacy Disclosure policy is being view by many as a way to avoid any responsibility for the non-compliance with COPPA by any third-party skills on the Echo Dot Kid. In response to this complaint, an Amazon spokesperson has come out, stating that it only allows kid skills to collect personal information from children outside of FreeTime Unlimited (i.e. the paid tier) ” and then only if the skill has a privacy policy and the developer separately obtains verified consent from the parent, adding that most kid skills do not have a privacy policy because they do not collect any personal information (Lomas TechCrunch). Advocates complain that even though a considerable amount of restrictions have been put in place to ensure that parent are given control over what skills and information their children can access, not nearly enough restrictions have been put in place to control how outside parties, whether they be Amazon or other third parties, use any data collected through the device. The Echo Dot Kid microphone is always on, and therefore allows for countless amount of information to be collected on the children who use it or simply are in its presence. In addition, to all the previously stated complaints, Amazon’s method of obtaining parental consent is also being called into question. The Echo Dot Kid does not verify the identity of any party requesting parental control. In fact, the device does not make any effort to confirm that the requesting party is the actual parent or even an adult. Instead, the device simply asks for a credit or debit card number and with just that, provides all user access. In response to these complaints, Amazon has come out in defence of the Echo Dot Kid, arguing that it complies with the Children’s Online Privacy Protection Act and commits no violations of any kind. At the moment it is unclear whether the Federal Trade Commission will be taking any actions against Amazon and has not commented on the case as of yet. Some believe it is unlikely that the FTC will take any action at all, as they usually only do so once real harm has occurred. In conclusion, I believe an investigation into the Echo Dot Kid is very much warranted. Regardless of the fact that the device may remember some data after it has supposedly been deleted, which might simply be a glitch, it cannot be denied, that requiring parents to call Amazon customer service to have their children’s data properly deleted is very problematic. Why provide parents with a delete feature if it doesn’t truly allow them to delete the data they wish to delete? It seems like the delete features true purpose is only to provide parents with a false sense of privacy and control over their children’s data. Parents should have a clear method of seeing the data being collected on their children, and not just data collected by Amazon, but by all connected third parties as well. Additionally, I feel all third party skills should be required to clearly state if they do or do not collect data, and if so, state what their privacy policy is, what data they collect, and how it will be used. Lastly, I agree that Amazon’s method of providing parental controls is insufficient as it does not make any effort to correctly identify and authenticate parents and should be modified to require two factor authentication. 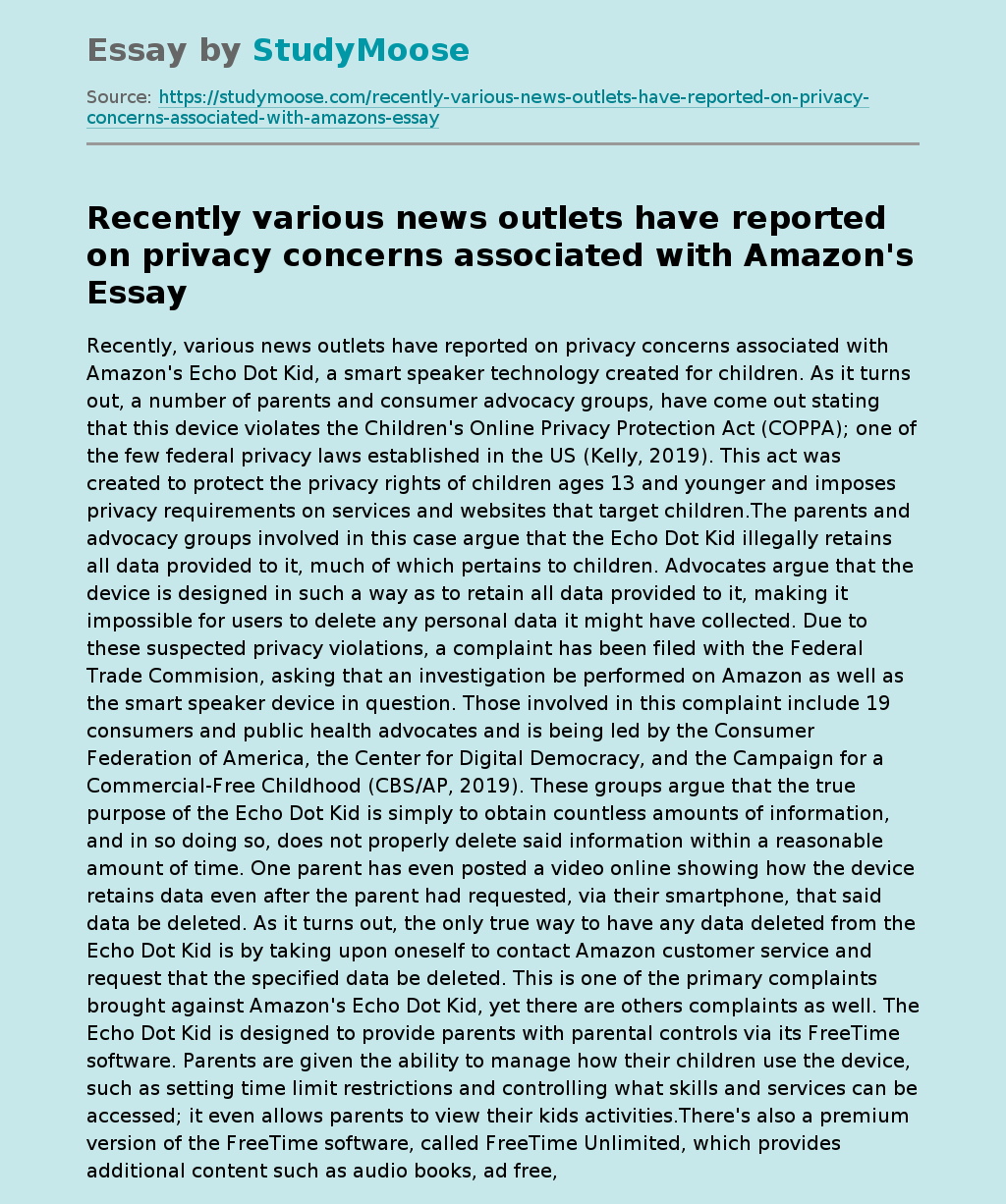