Reasons Why Cloning is Unethical

From the day that ‘Dolly the sheep’ made it to the headline news, the controversy regarding her existence has never ceased. It is quite amazing, how the issues surrounding a sheep could create such a great divide on public opinion, stir up much debate in scientific halls, and whose implications caused a dilemma that reached a magnitude which needed a presidential decision. Needless to say, the debate did not concern agriculture or animal rights, but on how she came to be — by cloning.

Don't use plagiarized sources. Get your custom essay on
“ Reasons Why Cloning is Unethical ”
Get custom paper
NEW! smart matching with writer

Contrary to popular belief, these clinical ventures though, were not done by sheer sense of adventurism, or by simple acts of human arrogance of ‘playing God’. Instead, this breakthrough in the field of biotechnology, along with other related cases, was carried out with the legitimate purpose of propagating livestock that carry desirable traits. Breeders can easily then raise farm animals that have the preferred traits and thus increase productivity and yield. Also, lab research for the noble intention of developing drugs, require numerous testing on animals before it can finally be declared effective and safe for human use.

Cloning would allow them to produce test-animals that display similar or identical characteristics and thus help validate results. There are several other reasons why cloning is held by many scientists as an essential means for improving human condition. However, such so-called conditions had now been raised to the point of fulfilling needs other than physical necessities. Man’s many woes and flaws in life such as the pain of losing a loved one or childless couples having to bear the unfulfilled desire of loving and rearing their own children, are just a few of the many disadvantages that confronts finite man.

Today through science, man is longing to challenge and ‘correct’ these impossible odds. Would cloning be the answer? II. Man’s Contemporary Alternative: Merits of Cloning-to Produce-Children Distinguished British philosopher Mary Warnock, expressed her support in favour of utilizing the technology of cloning to produce children. She believes that there is nothing wrong with this procedure and thereby there should be no question on the ethical soundness of such an endeavour (Connor, 2002). Together with the rest of those who agree with her, they believe that cloning offers an excellent solution for the following problems:

A. To Help Sterile Parent/s Obtain Biologically Related Children Individuals or parents who long to have their own offspring, but are hindered by sterility or some other reason — the only presented solution so far have been adoption. There are different reasons why some had found this unsatisfactory. With cloning, a sterile man can now have the opportunity of producing a child that bears his own characteristics. The need to find a sperm donor is eliminated, and consequently eliminates the possibility of their child acquiring and passing on undesirable traits to future generation outside the couple.

Such a method also opens for an attractive possibility not only for sterile couples but for homosexual couples and individuals who desire to raise a child of their own but do not want the entanglements of a marriage union. B. Pass-on a Genetic Disease Individuals or parents who carry defective genes such as a genetic disease can now hope to eliminate passing the disease to the following generations. Cloning would assure the parents of being able to raise children who will not be troubled by the heritable disorder. C. Pain of Losing a Loved One

The grief of losing a loved one can now be alleviated by cloning the dying or dead significant person. Since cloning involves the passing on of exact physical characteristics, producing a cloned individual would invariably cause ‘replication’ of the deceased loved one or relative. Those who are left, will be comforted by ‘seeing’ their dead spouse, child or relative ‘live again’ on the cloned individual. Although, there would be major differences in experiences which would make it entirely impossible to make an exact copy of an individual in all aspects, cloning would bring a connection of the lost loved one with the grieving members.

D. Society’s Desire to Have Individuals with Superior Abilities or Qualities Cloning brings families and societies to have super-human individuals by cloning outstanding athletes, musicians, men and women renowned for their beauty, or geniuses. By replicating these individuals, it is presumed that these superior qualities are determined by certain genetic make-up and thus, will be passed on through cloning. III. Reasons for Argument Cloning violates the ethics of human experimentation on the following grounds: A. Concern on Safety Of utmost concern when cloning humans is the high risk involved.

As of the moment, the cloning procedure being done in experimenting mammals has shown how unsafe it is to be even applied in humans. Many embryos got wasted as it took 277 attempts before finally producing Dolly the sheep (Gawler, 2000). Barely just being six years old later, Dolly became severely ill and had to be submitted for euthanasia. Careful examination revealed that her chromosomes had shown premature signs of aging (“Cloning”). The possibility of creating inborn abnormalities or congenital defects caused by the procedure should even bring parents with a hereditary disease not to employ cloning.

While it could hold promise of not passing on genetic diseases to their child, the latter is also vulnerable for congenital malformation. Also, since several donor eggs and substitute mothers are needed before achieving success, this places risks on several women. Experiments on animals had shown that there is high occurrence of premature abortion on cloned fetuses. If done on humans, continous abortion could lead to greater possibility of maternal death. B. The Issue of Consent Cloning also undermines the right of the cloned individual.

In contrast to the risks that could bring to surrogate mother or the gene donor, the risks posed at the cloned individual do not have the individual’s consent. Most often, the right to exercise freedom is often called by those who promote it. This is often based on the ‘freedom to reproduce’. This means that the constitution protects individuals or parents to freely choose whether they are to have children or not (Eisenstadt v. Baird, 1972). However, in exercising that right, it overrides the freedom of choice on the cloned individual.

True, reproductive freedom permits anybody to decide whether to have a child or not without hindrances by the government. It does not however, in any way, allow anyone to do it by whatever means and in complete disregard for the welfare of others. C. Possible Exploitation of Women Since cloning requires numerous tests before any attempts could become fruitful, large quantity of donor eggs will be needed. Getting the egg would subject the woman donor of hormonal treatment that gives high health risks.

Furthermore, what would most likely happen is that these women donors would be offered a substantial amount of money, and thus could lure poor women to compromise their health in exchange for financial gain (Council on Bioethics, 2002). IV. Conclusion More often, the concern for safety is limited on the aspect of limiting or perfecting the procedure. It does not consider the possible undesirable effects it would have — after it is accomplished. This perspective of safety does not take consideration on the unexpected effects it would have on the individual, family involved and society in general.

The relationships between members of those with cloned children would greatly be altered compared to conventional family set-up. Would the cloned individual of a father be his child or twin? Obviously, cloning will rearrange how family relations will be treated. Before any attempts to cloning-to-produce children be done, would be parent/s should give grave concern on the potential psychological effects this would have on the one being cloned. What also needs special consideration is it’s the social impact caused by confusion.

Cloning might open for unnecessary expensive legal battles, over custody as to who really are the child’s parents. Each individual who has a part of the cloned child might fight to claim for custody over the child. Given that such asexual means to produce children is not strange, faulty or imperfect, there is serious error on the purpose by which it longs for implementation. It places more significance on the one which will be cloned by replicating the person, rather than the cloned child. Human experience has revealed that man has the tendency to abuse, and therefore such technology can be used for vain reasons.

Reasons Why Cloning is Unethical. (2016, Aug 07). Retrieved from https://studymoose.com/reasons-why-cloning-is-unethical-essay 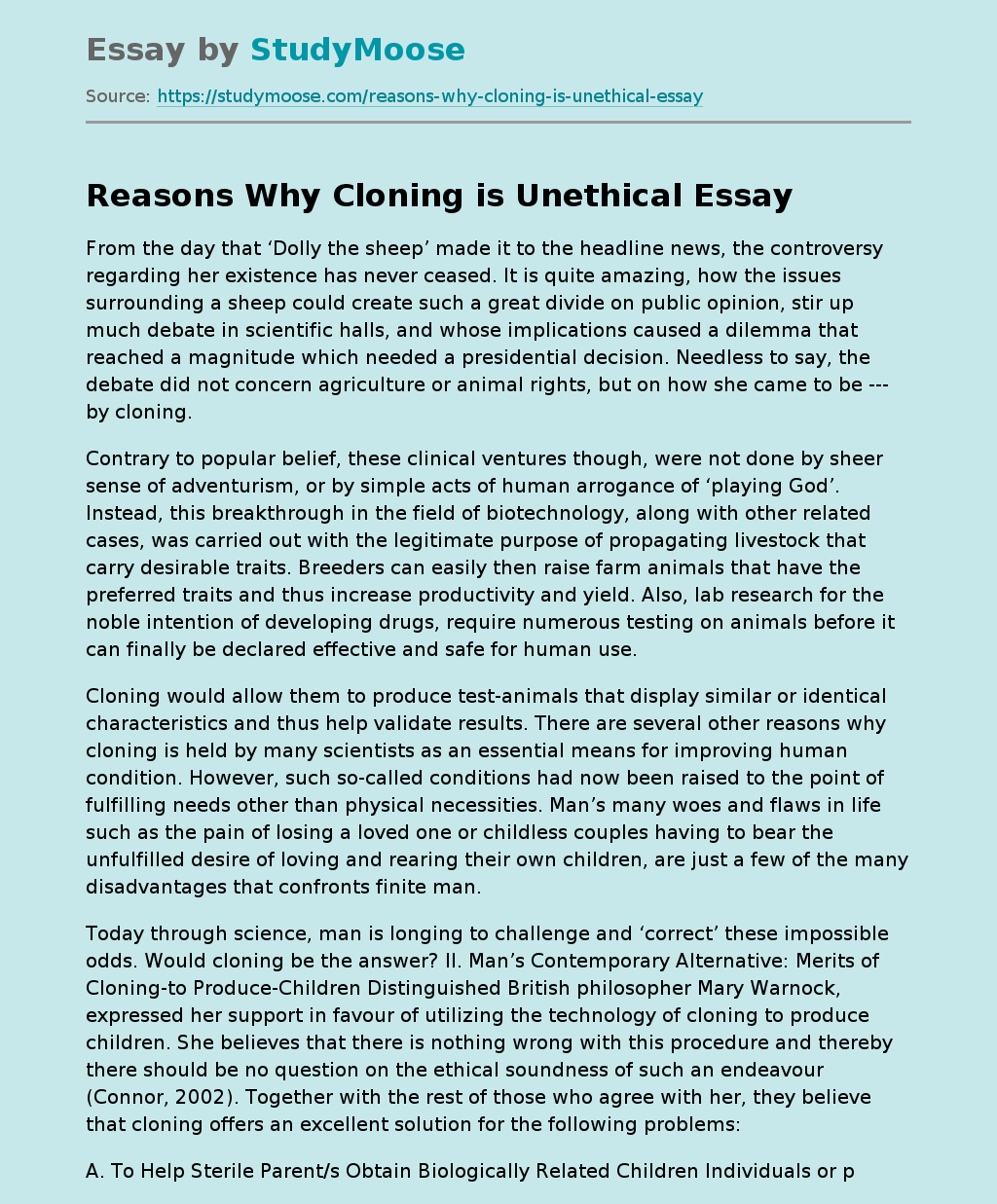