"Reading the River" by Mark Twain, and "The Way to Rainy Mountain" by N. Scott Momaday

The short works Reading the River by Mark Twain, and The Way to Rainy Mountain by N. Scott Momaday, are personal tales of moments in the authors lives and how those experiences impacted them spiritually. The central theme of both essays is that of impressing upon the reader to be careful not to take everyday life for granted. Both authors accomplish this mission by relying on examples from nature, but Momaday goes a step farther and incorporates his Native American heritage into the explanation of his world.

Don't use plagiarized sources. Get your custom essay on
“ “Reading the River” by Mark Twain, and “The Way to Rainy Mountain” by N. Scott Momaday ”
Get custom paper
NEW! smart matching with writer

Twain writes about learning to guide a riverboat down the Mississippi River and to look for tell-tale signs of positive or negative aspects that may affect the journey.

He describes how, after so many years of looking for things in or on the river, he has lost the ability to appreciate the beauty of the river itself that others take for granted. Nature is also an important element in the writings of Momaday. He uses lush language to describe the mountains and the plains in order to relay his deep respect of his surroundings.

He also describes the oral history of his tribe, the Kiowas, which his grandmother handed down to subsequent generations. When his grandmother died, he realized that she was the last Kiowa who had ties to the history of the tribe and that any tales told from then on would be merely reiterations of her stories, rather than the actual story-telling itself.

Both authors compare the subject of their interest to that of a story, be it a book or a tale well told.

In this way they are able to fascinate the reader rather than merely preach their advice. It could even be argued that both authors are merely engaged in the fanciful retelling of their actual life events. Either intentionally or accidentally, they both provide powerful images that encourage their readers to appreciate that which is commonplace. Twain compares the Mississippi River to a book that is deciphered only by the trained eye, such as his. He remembers the beauty that once enraptured him and drew him to the water. He describes a sunset with imagery that leaves the reader thirsty for more, only to reveal that his trained eye no longer sees such irrelevant things it sees only the danger of a rock, the landmark of a tree or the disturbances in the water that signal incoming or receding tides. He laments that those who could not read this book saw nothing but all manner of pretty pictures in it ( p. 583).

This elaborate sunset that had once bewitched him now merely told him that we are going to have wind tomorrow (p. 584). Natural phenomena in Momadays recollections also summon up powerful imagery for those who choose not to look too closely. He describes the lush fields, the snowy mountains, and the harsh plains with words that paint a picture in the readers mind. He also transitions into the idea that not everything must be seen by the eyes in order to give a real picture to the mind. In his grandmothers mind were places she had never been to physically, but rather were an immense landscape of the continental interior [that] lay like memory in her blood (p. 548). The imagery of her stories ceased to exist when her body lay in death. With this event, Momaday realized that there would be no more oral histories, merely tales of the past, and he set out to do what his grandmother had not to actually see these places because he, like so many modern Native Americans, did not have these memories programmed into his own blood.

Although there are similarities of theory and imagery in both Twains and Momadays essays, both are also unique in relaying the shared message of paying attention to ones world. Where Twain loses the ability to appreciate the beauty of the flowing river, Momaday embraces the beauty of nature as a tool to underscore the theme of his writing. Unable to appreciate the beauty of the Mississippi River, Twain is forced to have a more realistic and practical view. He searches the water for nuances in the current or new dangers that werent there during the previous voyage, and he looks to the skies for predictions of weather. Momaday adopts a romantic style, relying on the legends of his forefathers to explain what to his tribal ancestors must have appeared unexplainable. For example, rather than recognize the existence of Devils Tower and the stars in the sky as scientifically explainable phenomena, the Kiowa people explained the existence of such things with myths and legends.

Being sun-worshipers, they also explained their very existence with mythological importance. This is common throughout Native American heritage, whereas the quest for factual knowledge has long been the goal of European Americans. Twain relies heavily upon analogies so that the reader can more readily identify with his position. Momaday enraptures his readers with carefully detailed descriptions and heartfelt

emotions. Both are equally successful tactics and invite a wide variety of readers to leave their reading experience with the same basic message. Where Twain equates his inability to see beauty in the river to that of a doctor no longer able to separate the beauty of the human body from the disease and deformities of humans, Momaday creates an imaginary playground that the reader is hesitant to leave.

Everything we encounter has a purpose from the most magnificent sunset to the magical changing of the seasons. Both Mark Twain and N. Scott Momaday realize this and encourage others to do so by the telling of their life experiences in these two essays. A common theme is relayed via different styles and different uses of language and imagery, and both are equally effective. Twains analogy of the doctor and patient to explain his relationship with the river can be replaced with any profession, for example architects or gardeners, and appeals to a realistic and down-to-earth audience. Momadays ability to paint pictures with words and to tease the reader with romantic myths draws a very different group. Whether these essays be reviewed for their similarities or their differences, both are alike in their effectiveness to encourage readers to stop and smell the roses.

"Reading the River" by Mark Twain, and "The Way to Rainy Mountain" by N. Scott Momaday. (2016, Jul 04). Retrieved from https://studymoose.com/reading-the-river-by-mark-twain-and-the-way-to-rainy-mountain-by-n-scott-momaday-essay 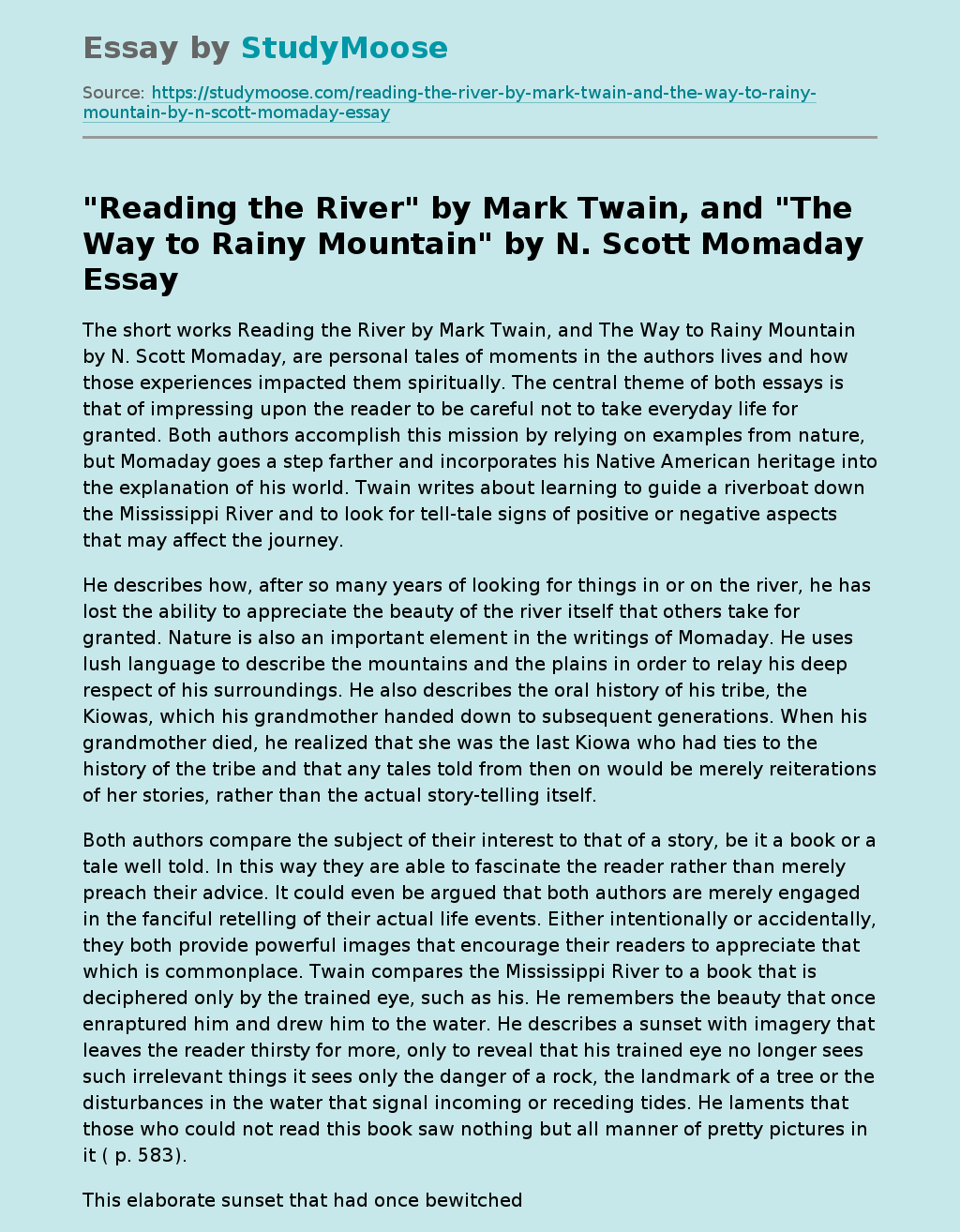