In the summer of 1961 we meet Sammy. Sammy is a 19-year-old clerk at the local A&P in a small town, and one day a few girls walk in, in their bikinis. Everyone in the store either stares at them lustfully or averts their eyes uncomfortably. When the manager gets back he scolds the girls and tells them that they cannot come back in there dressed that way again. So Sammy quits. I personally enjoy this story because of the dated wordplay and the character development.

We learn that he has been working that the store for some time, and in doing so has noted many peculiarities about the people who frequent it. Having little else to do on a Thursday afternoon, he just looks around and internally judges everyone that he sees. Of an elderly woman who he is assisting at the start of the story he says, “She’s one of these cash-register-watchers, a witch about fifty with rouge on her cheekbones and no eyebrows, and I know it made her day to trip me up.

She’d been watching cash registers for fifty years and probably never seen a mistake before.

The story goes on about his observations with only a few bits of dialogue, in which one person is typically talking to someone else, with no real back and forth. I think that Updikes’ decision to keep the majority of the story in Sammy’s mind was interesting to me, and I feel as though it added a lot to the character.

It was a very short story set in one place, over a period of about twenty minutes, so most of the success of the character development has to do with his inner monologue. We learn that Sammy is a bored 19 year old who is tired of his job and the predictability of the people in it.

When something as unnatural as three scantily clad girls entering a supermarket in the early sixties occurs, the people in the market hardly pay attention. He believes that “you could set off dynamite in an A & P and the people would by and large keep reaching and checking oatmeal off their lists and muttering “Let me see, there was a third thing, began with A, asparagus, no , ah, yes, applesauce! ” or whatever it is they do mutter. ” Right there is a great summation for this character; dark, crude, pessimistic, and overly observant.

Other than his witty wordplay, the story was lacking for me. I enjoyed reading it, but it was not the best thing that I have ever read. I feel like there could have been more, Sammy was so talkative in his own head, but then when the girls showed up he was quiet as a mouse. That makes sense for the character, but when he quit and the girls left I feel like there should have been more interaction between him and his manager, or maybe more of his inner thoughts. It is hard to pinpoint, and I would not even begin to know how to fix it, but this story falls short at the end in my opinion. 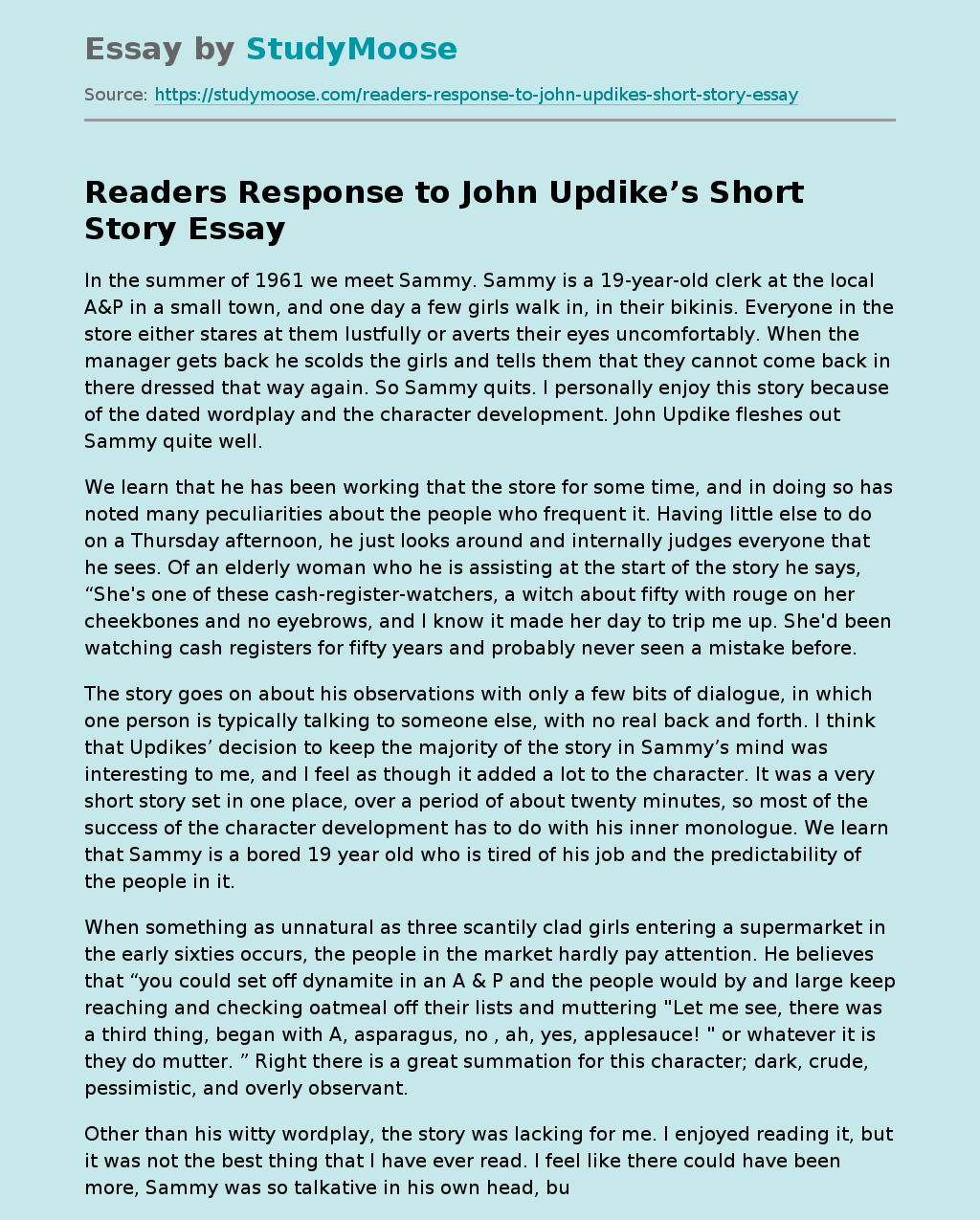