As I was reading the story I was bothered because of some complication of the events happened. It is the only story that I have encountered for the rest of my college which I have to go back to what I have just read. The situation in postmodern fantasy is more complicated. For postmodern characters, the boundaries between dream and reality are blurred, the worlds as equally real. My own interest is not in the entire field of speculative fiction but only in the modern tale, which is descended from the literary fairy tale and the philosophical tale and, in particular, in modern tales by Filipino women who write in English.

Don't use plagiarized sources.
Get Your Custom Essay on Reaction Paper of May Day Eve Just from $13,9/Page

It accepts more than one reality and more than one truth. Well as far as I know, it is all about love on the night of May, the main character is Anastasia DoÑa Agueda which they call as a witch, Don badoy montiya as a devil and the girl which is the daughter of Agueda.

This is an example of realism in fictional novel in which romance and love is occurred. I think Nick Joaquin is interested in the house of the middle class Maynilans.

The boys way back on the past were very gentleman, good looking and very loyal to his love one. The story revolves mostly around Badoy and Agueda and the horrible marriage they had together. Badoy was once madly in love with Agueda, mostly due to her looks from the description in the book. He did not know much about her when they were younger and Agueda refused him at first. Later on Agueda is seen using a magic mirror asking who she should wed. The mirror replied to her that it should be Badoy, the man she had first refused. When Don Badoy Montiya forced Agueda to marry him, it shows the status of the women during the past.

Love is a splendid thing, it just happened, as most romantics say that it how goes for Badoy and Agueda. Badoy told his children how he courted their mother to have a strong relation to them. The climax of the story is like ruefully causing sorrow or pity, pitiable and deplorable. Shrivel to contract and wrinkle, as from great heat and cold as long as the grief is the emotional which I included here. They chose to see the worst, but in the end, it can be seen they were in love. The worst in each other only came out when they chose to see it in the tragic way. The moral could also be that reality comes no matter what, and one just has to live with that reality whether it is good or bad. It also shows that youthful love will change and not always remain.

In the story of Faith, Love and Dr. Lazaro you can relate of what is the importance of this three Life is too short to stress yourself to the things that is not that matter in our daily life. First of all we need Faith so that we can have energy that keeps us going, it help us to be strong to the trials we are encountering, especially in the way we feel like giving up. Love, we need to consider ourselves to be loved also. First, I thought it’s all about relationships or just the things that is happening between two people who are in love because of its title. But as I read it, I realize that this is all about a Doctor which is Lazaro who is very much dedicated with his profession but have lost his faith in God and time for his family.

He lost his faith in God at the time his younger son died, who actually committed suicide and also because he witness people who is suffering from deep pain and yet they still die. He began to question God why there is so much suffering in the world. Dr. Lazaro devoted his time to his profession that made him lost time for his family, that he doesn’t even have a chance to be closer with his older son. But the scene that really captures my attention is when Dr. Lazaro and his son attended a sick child but unfortunately Dr. Lazaro failed to rescue the child, then the son baptized the child before it died.

While on their way home Dr. Lazaro had a chance to talk to his son and ask about the baptism that his son made. Because of that, it made him to reflect on his life and he’s belief and wonder again about the teachings of the church which I think bring backed Dr. Lazaro’s faith to God. As I continually reading this, it reminded me the story of Lazarus in the Bible. Lazarus who’s resurrected because of Martha’s faith. Well, this story made me realize that we should not lose faith to God. Everything happens for a reason and God always is in control. In the end, we should not lose hope to God because without him, we are nothing.

Reaction Paper of May Day Eve. (2016, Jun 09). Retrieved from https://studymoose.com/reaction-paper-of-may-day-eve-essay 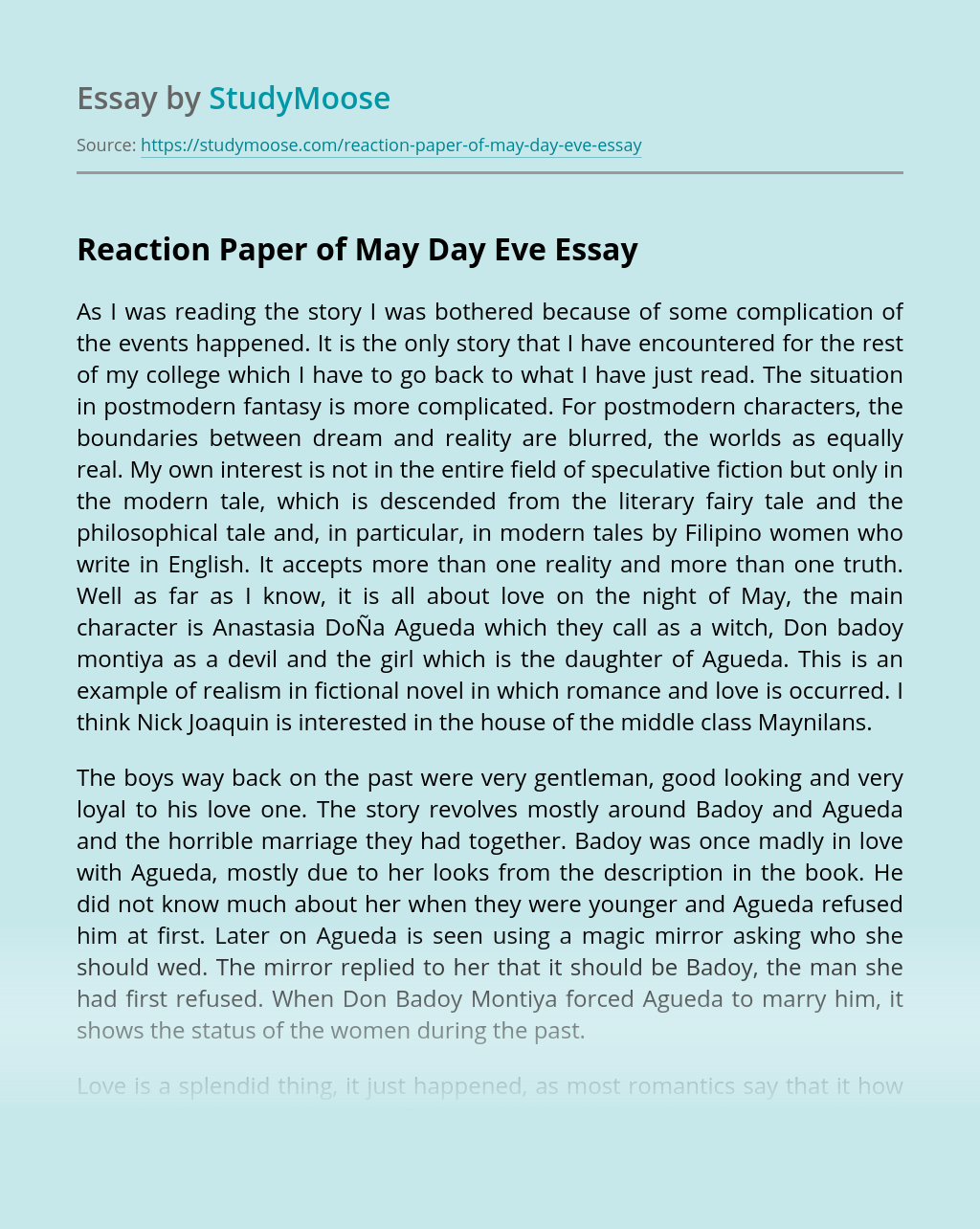