The Elements of Short Story: A Worn Path

Don't use plagiarized sources. Get your custom essay on
“ The Elements of Short Story: A Worn Path ”
Get custom paper
NEW! smart matching with writer

The other elements of the story include the plot, setting, point of view, tone, character, and symbolism. There are several themes from the short story “ A Worn Path” to include love and racism. The story is presented in the third person point of view; the setting is in southwestern Mississippi; the plot has a beginning, middle, end; and the symbolism is in the name of Phoenix.

There are several theme throughout this short story, one being racism the Phoenix had to endure on her journey to get medication for her grandson.

Phoenix was first helped out of a ditch she fell into and then stuck a shotgun in her face. The most obvious theme in this story is the love a grandmother (Phoenix) have for her grandson. Phoenix Jackson was an old frail black women who felt an obligation of taking care of her grandson because she was all the family he had. According to Gale (2002) A minor theme in “A Worn Path” concerns guilt and innocence.

Phoenix feels guilty when she picks up the nickel that falls from the pocket of the white hunter. She indicates in her words to the hunter that she believes that she deserves to be shot for the offense: “I seen plenty go off closer by, in my day, and for less than what I done.” (p. 4) The title it self indicates that Phoenix had perseverance and hope base on the number of times she had to make that long journey to pick up the medication for her grandson.

The name of Phoenix itself represent the theme of resurrection; it was a mythological bird in ancient times that rose from the dead and begun a new life cycle. Phoenix the person was down and out several times, but she got and continued on her journey to get the medication for her grandson. The point of view in “A Worn Path” is told from a third person limited point of view. The reader can empathize with the main character Phoenix, because her thoughts and actions are seen from a distance. There is dialogue in the story in which Phoenix talk with herself.

The setting of the story takes place in December 1941 southwestern Mississippi. It starts in the wilderness and ends up in Natchez. The weather had to be cold and for an elderly frail women to make that journey in her eighty’s is remarkable. The social conditions at that time was not good for any African American, let alone for an frail elderly women during the depression. We can look at the time when the white hunter put the shotgun in her face without worrying about the consequences. The plot of the story begins with frail elderly grandmother embarking on a journey on a road in a rural area to acquire medication for her grandson. It was in December, so you can assume it was cold. During her journey she incounted dogs, a racist hunter who pointed a shotgun in her face. She talked to herself throughout her journey, and felt the pain in her weary bones. She had communication with God when times got tough for her during the journey.

She had to deal with harshness in which the assistance was disrespectful to her at the doctor office. The climax of the story is when she completed her mission and the nurse gave her the prescription for her grandson and she went on her journey back home to give her grandson the medication. The symbolism was obvious because the main character was name after a mythological bird who had risen from the ashes ashes every 500 years. The grandmother was like the mythological bird, she fell down, got back up and continued on with her journey to get the medication and return her home to give her grandson the medication.

The title of the short story normally points to the theme or what the writer is saying. The other elements of the story include the plot, setting, point of view, tone, character, and symbolism. There are several themes from the short story “ A Worn Path” to include love, racism, guilt, resurrection, and preseverance. The story was presented in the third person point of view; the setting is in southwestern Mississippi, December 1941; the plot had a beginning, middle, end; and the symbolism is in the name of Phoenix (mythological bird).

The Elements of Short Story: A Worn Path. (2016, Oct 21). Retrieved from https://studymoose.com/re-the-elements-of-short-story-a-worn-path-essay 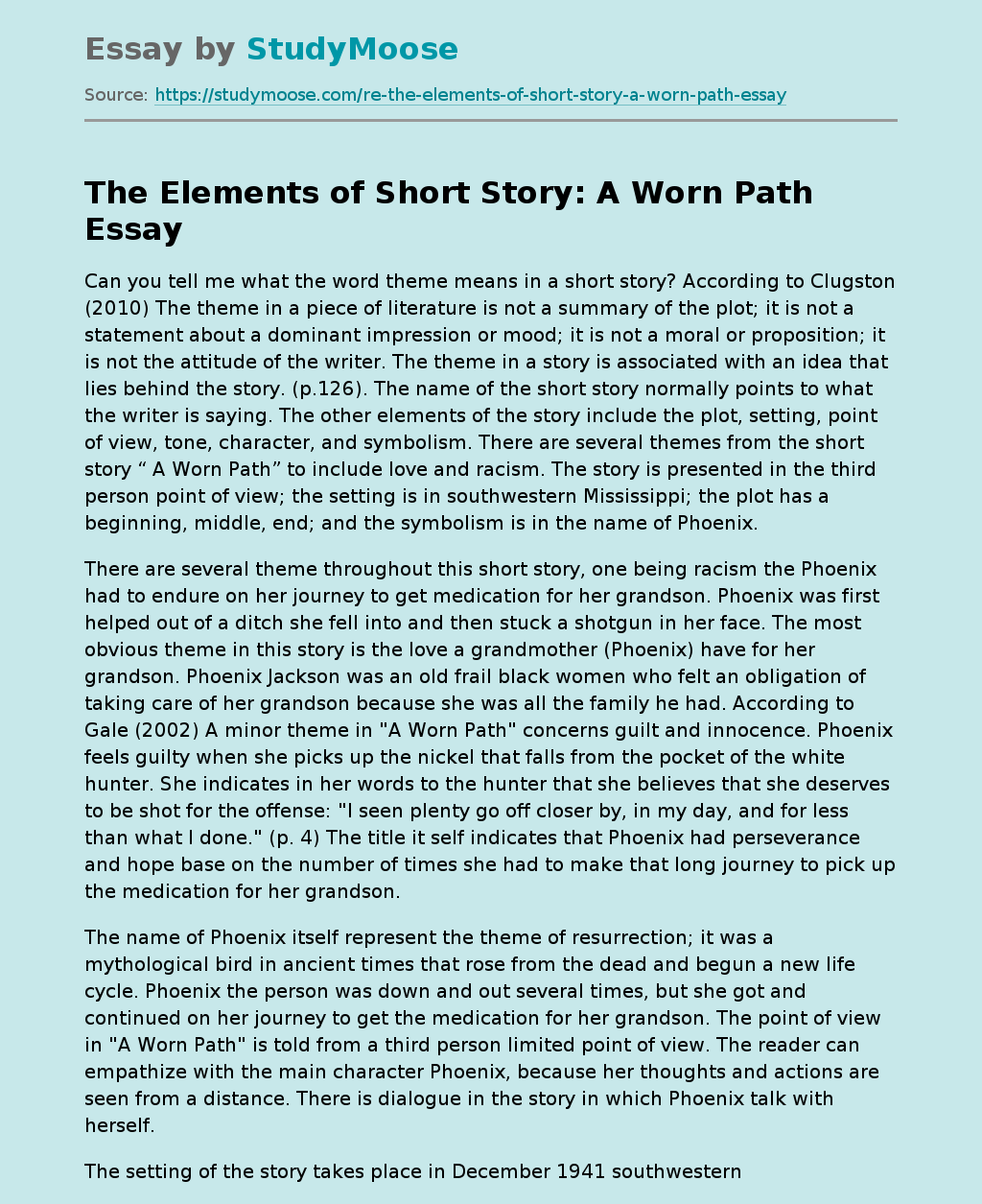