'A Worn path' by Eudora Welty

“A Worn path”, by Eudora Welty, first published in 1941, contains in itself a vast array of ideas and symbols for readers to interpret. For this reason literary analysts still find the text as appealing today as it was seventy years ago. The characters and the events in this beautiful piece of literature have been analyzed time and again, yet the uncertainty of the text encourages the reader’s mind to draw meanings of his own. Eudora Welty was known for her beautiful use of symbolism and similes.

Don't use plagiarized sources. Get your custom essay on
“ ‘A Worn path’ by Eudora Welty ”
Get custom paper
NEW! smart matching with writer

In the short story “A Worn Path” her use of symbolism emphasis the social issues that hold greater meaning when seen from the historical perspective and encourage the reader to draw connections between the social dynamics of the era especially to the clearly stated racism, Christianity, and historical characters associated with both the blacks and Southern America. My hypothesis is that Phoenix Jackson and her journey are a pessimistic story about the destructive nature of racism and Southern Culture of that time, this story is told using symbolism.

The short story, seemingly, is about a rather difficult journey made by an elderly black woman, through landscapes unsafe for a women with her fragility, encountering many obstacles in her path to the destination; last being a doctor’s office in the town of Natchez Mississippi. The occurrences in this journey however hint at the larger journey of her life, that she has made so far and is still continuing. Having endured all the atrocities of the whites during the slave years, having seen the Civil war and so much more, everything around her is full of symbolism.

The journey itself witch is never ending leaves Phoenix in a state of constant motion and struggle. Jason Martinez Martinez p. #2 English 102 Slaughter 6-25-12 She first appears as a stereotype of an old black woman, with her typical long dress, superstitions, and the habit of talking to herself (Bethea 2) but as we move along with her we recognize her sense of dignity, pride, her dreams, her devotion and purpose, a woman with all the human complexity of one belonging to any race, but with a much more strengthened outlook to life and the obstacles it brings about.

With the historical backdrop of oppression and the social conditions of that time when the story was written, the writer opens our eyes to the irony, racism and indifference that were an everyday event to the colored races of America, not so long ago. In the face of this adversity and helplessness however, we also see a resolution, a struggle for resurrection and the ever-continuing cycle of life despite complete disparity, in the form of the main character Phoenix Jackson. The destination of the story is the southern town of Natchez, with its “grandiose architectural gems” (Bethea 3) situated at the end of the Natchez Trace.

This trace and the town itself both hold historic meaning for America and the African-American slaves brought into the land and distributed through these routes. The economic rise of the South in the early years of American history rested on the muscle power of the imported African slaves, and being central in the expansion of the Cotton Empire in the South, cities like Natchez made economies based on such slave trade with the rest of the country, making the south the richest part of America “where by 1850 two-thirds of the nation’s millionaires lived” (Bethea 6) yet Phoenix’s life was condemed to poverty.

Jason Martinez Martinez p. #3 English 102 Slaughter 6-25-12 This was the place slavery was most dominant and consequently the contrast between black and white most obvious. The social dynamics even after the end of slavery reflected a miserable picture to the blacks that were now oppressed by poverty and discrimination of all sorts if not slavery. Phoenix Jackson is presented in the words of Dean Bethea: “as an individual trapped within the very real boundaries of a historically defined, deeply racist society” (Bethea 4).

'A Worn path' by Eudora Welty. (2020, Jun 02). Retrieved from https://studymoose.com/a-worn-path-by-eudora-welty-essay 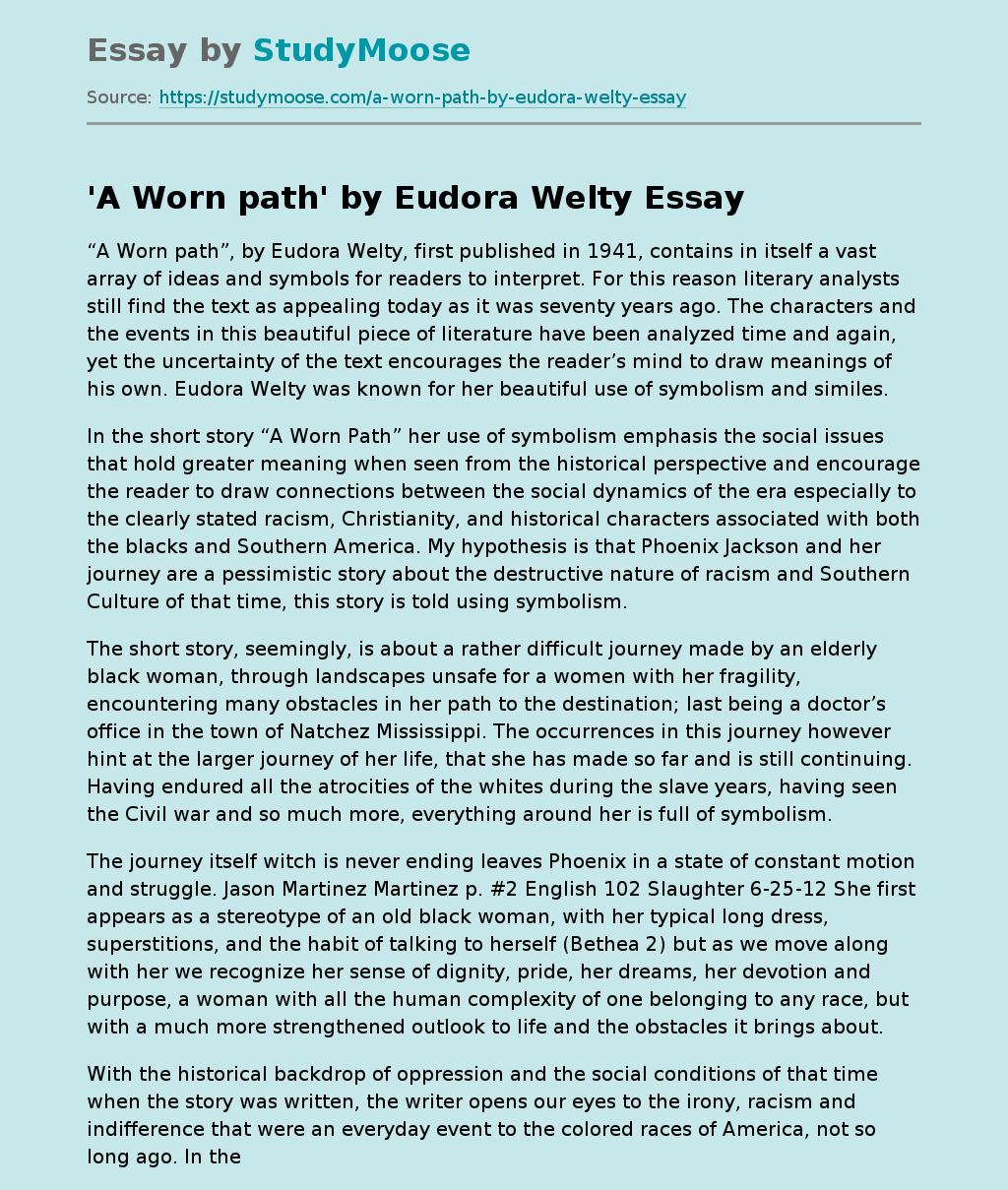