Phoenix Jackson carried on a lifetime of hardship in the short story “A Worn Path” by Eudora Welty. She took a familiar walk downtown Natchez one chilly December morning to get medicine for her ill grandson. She vividly told about all of the obstacles that she had faced on her journey and how she overcame every single one of them. The messages that the author wishes to convey to his or her readers, in “A Worn Path” by Eudora Welty are perseverance and determination.

Don't use plagiarized sources. Get your custom essay on
“ “A Worn Path” by Eudora Welty Analysis ”
Get custom paper
NEW! smart matching with writer

Despite of Ms. Jackson’s old age, she was extremely determined to make it to her destination to get the job done.

When her journey begins, the audience comes to understand that her journey will be a struggle. Phoenix Jackson never let her old age, physically nor mentally get to her. She was stacked with power which was comprised of her affection, encounter and relinquishing nature. One may notice that Ms. Jackson takes this path quite often, in the short story she would know when she got to certain locations on the path she would already know what was coming up next.

“Up through the pines, she said at length.” “Now down through the oaks.” (Welty 388) She even stated that she wasn’t as old as she thought she was. (Welty 388) She also stated that back in the summer, it took her a while to get by a two-headed snake that was coming around a tree. (Welty 389) It was obvious that Ms. Jackson had faced these creatures before, but she did not let that affect her journey.

Her determination was above all of her feelings Ms. Jackson eventually came upon a well in which she had clearly been familiar with her entire life. She stated that no one knew who made the well or knew anything about it. It had been there since she was born. (Welty 389) As she continued her walk, she met a dog and fell into a ditch while hitting the dog with her cane. A man who happened to be a hunter went over to help her with his dog on a chain. (Welty 390) The man asked her where she was headed and found it very humorous when she informed him that she was headed into town. The hunter tried to belittle Ms. Jackson and boast of himself because he walks just as far as she does when he is out hunting for birds. Ms. Jackson eventually sees a nickel fall out of the man’s pocket and onto the ground. While the man was distracted by the dogs, she stretched down to the ground and slipped the nickel into her apron pocket. “Well, I scared him off that time,” he said, and then he laughed and lifted his gun and pointed it at Ms. Phoenix.” (Welty 391) At this point, Ms. Phoenix’s courage is unmatched. She shows the reader that she wasn’t not only afraid of the hunter’s gun, but she was not afraid of the familiar journey that she was on as well.

Ms. Phoenix eventually makes it downtown and when she finally makes it there, she took a path that ran up a hill. “Seem like there is chains about my feet, time I get this far. Something always take a hold of me on this hill–pleads I should stay.” (Welty 388) Phoenix came across a hill which means that the path was getting difficult for her. At that point, her body was telling her that she needed to stop but she pleaded with herself so that she could go. “Up through the pines, now down through oaks.” (Welty 388) “Thorns, you doing your appointed work. Never want to let folks pass, no sir. Old eyes thought you was a pretty little green bush.” (Welty 388) Her eyes were old, so the plant looked like a regular green bush to her. She is also aware and sees everything around her whether it is living or non-living.

When she finally makes it inside of the clinic the nurse asked about Ms. Phoenix’s grandson “Throat never heals, does it?” said the nurse, speaking in a loud, sure voice to Phoenix. By now she had a card with something written on it, a little list. “Yes. Swallowed lye. When was it? —January—two-three years ago—” (Welty 393) Although Ms. Jackson’s grandson’s illness is not curable she still does not give up. The hunter not the nurse could stop her from curing her grandson’s pain. Ms. Phoenix’s journey may not have been very successful or easy, her determination really shows how much she loves her grandson and has for him to get well. She was not interested in what the nurse had to say but giving up was not an option for her. “My little grandson, he sit up there in the house all wrapped up, waiting by himself. We is the only two left in the world. He suffer and it don’t seem to put him back at all.” (Welty 393) Ms. Phoenix finally expresses how she really feels. She did not only describe her grandson but she described herself as well. She did not care how about long her grandson was suffering from his illness, she was just willing to do whatever she could to ease his pain.

In conclusion, despite the obstacles Ms. Jackson faced on her journey, she overcame all of them. She was selfless, heroic, and determined throughout her entire journey. She also did not let her age or fear stop her from trying to ease the pain of the only person in her life. How far would you travel to care for a loved one? 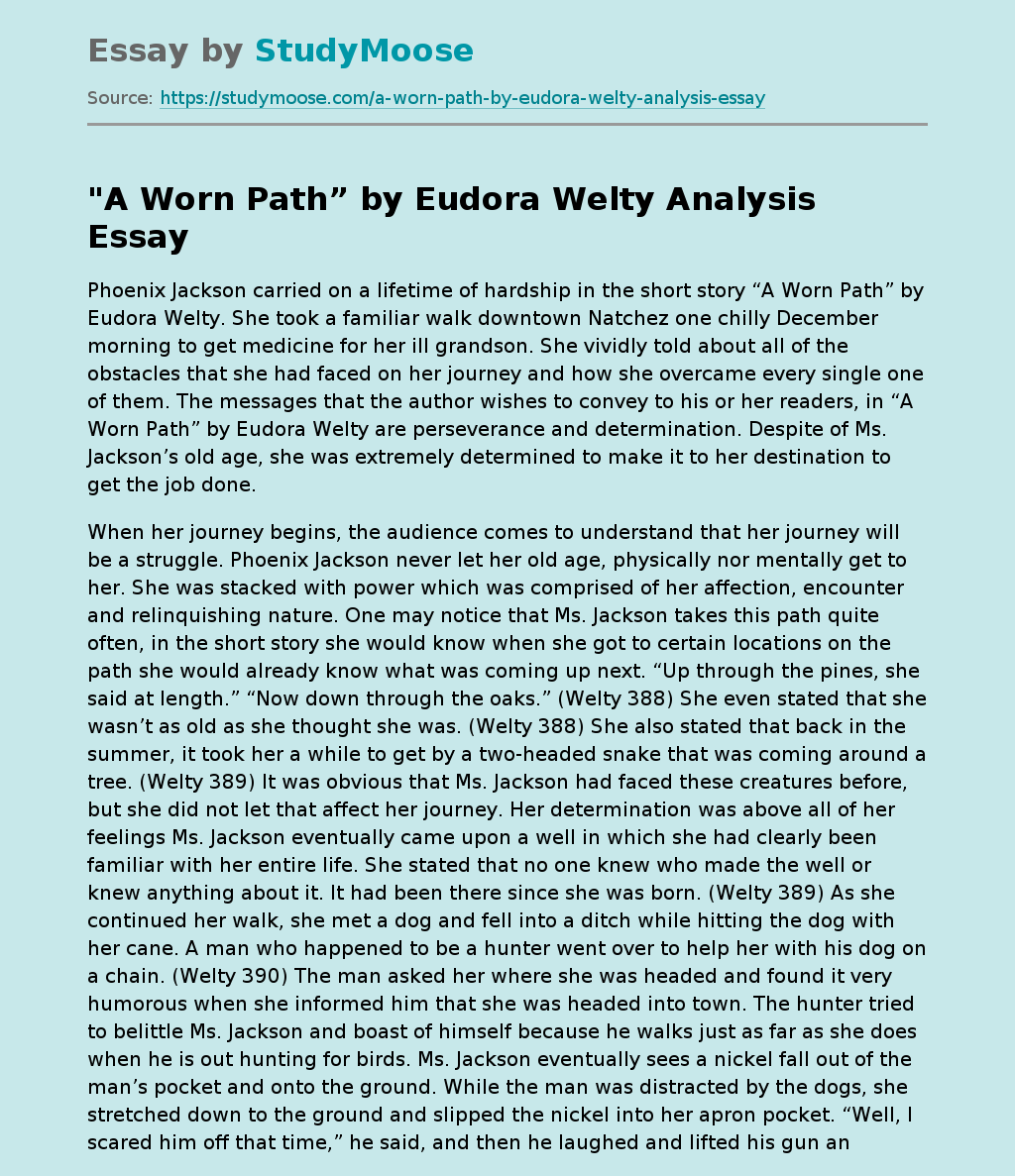