Dedication in the Short Story A Worn Path

In the short story “A Worn Path”, Eudora Welty tells of Phoenix who is living during a time period of racial discrimination, prejudice, and segregation. Phoenix Jackson is a very frail African American woman whose eyes are blue of age; her skin is stained with patterns of countless wrinkles telling of her hardworking years, her face is worn and tired but illuminated a golden ray of light. The story tells of Phoenix slowly strolling down a threadbare road making her way to town for her ailing grandson, who needs pain killers for his throat.

Don't use plagiarized sources. Get your custom essay on
“ Dedication in the Short Story A Worn Path ”
Get custom paper
NEW! smart matching with writer

Despite the many obstacles that arise and Phoenix is faced with, she strives forward depending on her own perseverance, but willing to sacrifice her health throughout the long journey. Phoenix sets out during daybreak and doesn’t make it to town until half way through the day.

When she finally arrives at the clinic, Phoenix is once again put up with another challenge that slows her down further.

The clinic is two stories high; the first floor is for whites only and the upper level blacks. She makes her way up the long, narrow staircase and into the doctor’s office when then she is asked her purpose for coming. Standing dumbfounded and exhausted from her long journey, she could not remember why she has come all this way. A friendly and kind nurse, who knew Phoenix, came to her assistance, and after inquiring about her grandson, gave the pain medicine that was promised to Phoenix. Phoenix then turns around and starts her long, treacherous journey home.

There are many conflicts that arise in this story. One of the key elements that are displayed in this story is conflict with oneself. Phoenix is an elderly lady, who is traveling this long path at the expense of someone else. When she arrives at the doctor’s office, she is in amazement that she has forgotten her purpose for going after this trip that has taken up most of her day. She is battling her age and what her age brings along. This story doesn’t explain if her grandson is dead or alive, leaving the audience to question whether she is delusional, thinking her grandson is alive when he has died from swallowing lye. She also lives far from society, and alone in the woods. This story ties in with “The Yellow Wallpaper”; at the end of “The Yellow Wallpaper” the narrator becomes mentally ill and thinks that the woman in the wallpaper, that she has been seeing, is in her.

This also leaves the audience to think that this character has become delusional. Both stories, although very diverse, leaves one to think what is going on. Eudora had said “It does not matter whether he is alive or isn’t, what happened is that it did. I mean she would go through this experience that is far, far away and whether he is still living to her knowledge, or not, it would not occur to her. That was a part of it. The cause was probably too late, but that didn’t get through to her, she would have done it anyway, so it’s the act that matters regardless of what might be changing circumstance. That wasn’t as important as that act and the reason for going. What she did is the story” (YouTube). Another two key element are person vs. person and nature. Everything around her told her to go back and don’t go forward, but she didn’t listen. People around her doubted her actions mainly because of her age. She just shrugged them off and kept on walking.

Being an American supplies such a broad definition, but what makes a story American mainly distinguishes how Americans act. The setting of this story takes place in the south during 1941 Mississippi, where segregation is in effect. The symbolism of the separation between the two races exemplifies how discrimination was during this time period. However, there seems to be irony between how this story tells of segregation and the way it is viewed today. In this story, segregation didn’t seem to impact Phoenix. Phoenix still went on her way, and in many ways, people seemed to respect that she is an African American.

The representation that is held today is this time period being brutal, with many killings and hatred involved, but this story tells the opposite. There is still some type of physical evidence taking place, but just not in such depth. Eudora Welty said “Phoenix is a perfect name because year after year, she took this journey, but she rose again like the Phoenix” (YouTube). Her drive and devotion to her grandson is what makes this American but realistic of the South. She is inspiring and holds such a strong influence on how determined Americans are. By stories like this, we are influenced to make a difference in not only our lives, but those around us. Phoenix demonstrates a strong, willed human being who lets nothing stop her from getting where she needs to go.

This story is unique in its own way, very inspirational and displays such strong heart and love. In life, we are faced with obstacles that will try and make us turn around or gives us so much negativity that we begin to question whether or not what we do is worth the effort. Phoenix, an elderly woman who is struggling with her own well-being, travels a long trodden path to reach her destination despite all the bashing she endures. “Something always take a hold of me on this hill- pleads I should stay” (Welty), explains how everything is against her, even her old age, and though she knows this is what she has to do, she understands that the task was way beyond her capability, but it didn’t stop her, she still continued.

When walking she says “seem like there is chains about my feet, time I get this far” (Welty), tells of the long journey she is faced with and how exhausted she has become, Phoenix travels this road so often; it has become a ritual for her. She is an example of why we shouldn’t give up. Phoenix is so courageous and fears nothing. When walking down the road, she comes to find alligators in the swamp and tells them to “sleep on, alligators, and blow your bubbles” (Welty). I feel like she is mocking them and is proving that she isn’t afraid of what she has to face. This is how we have to view life sometimes.

The reason why I chose this story is because the message it holds. I feel like what this story is telling us is when life throws us down; we have to get back up and keep on moving. Also another reason why I chose this story is because, Phoenix reminds me so much of my grandmother. She displays so much of her qualities and characteristics. They both are stubborn, but never gives up and keeps on moving even when people tell them that they can’t do this and that. This story has such a strong impact and makes one view their life differently.

Dedication in the Short Story A Worn Path. (2016, Apr 02). Retrieved from https://studymoose.com/dedication-in-the-short-story-a-worn-path-essay 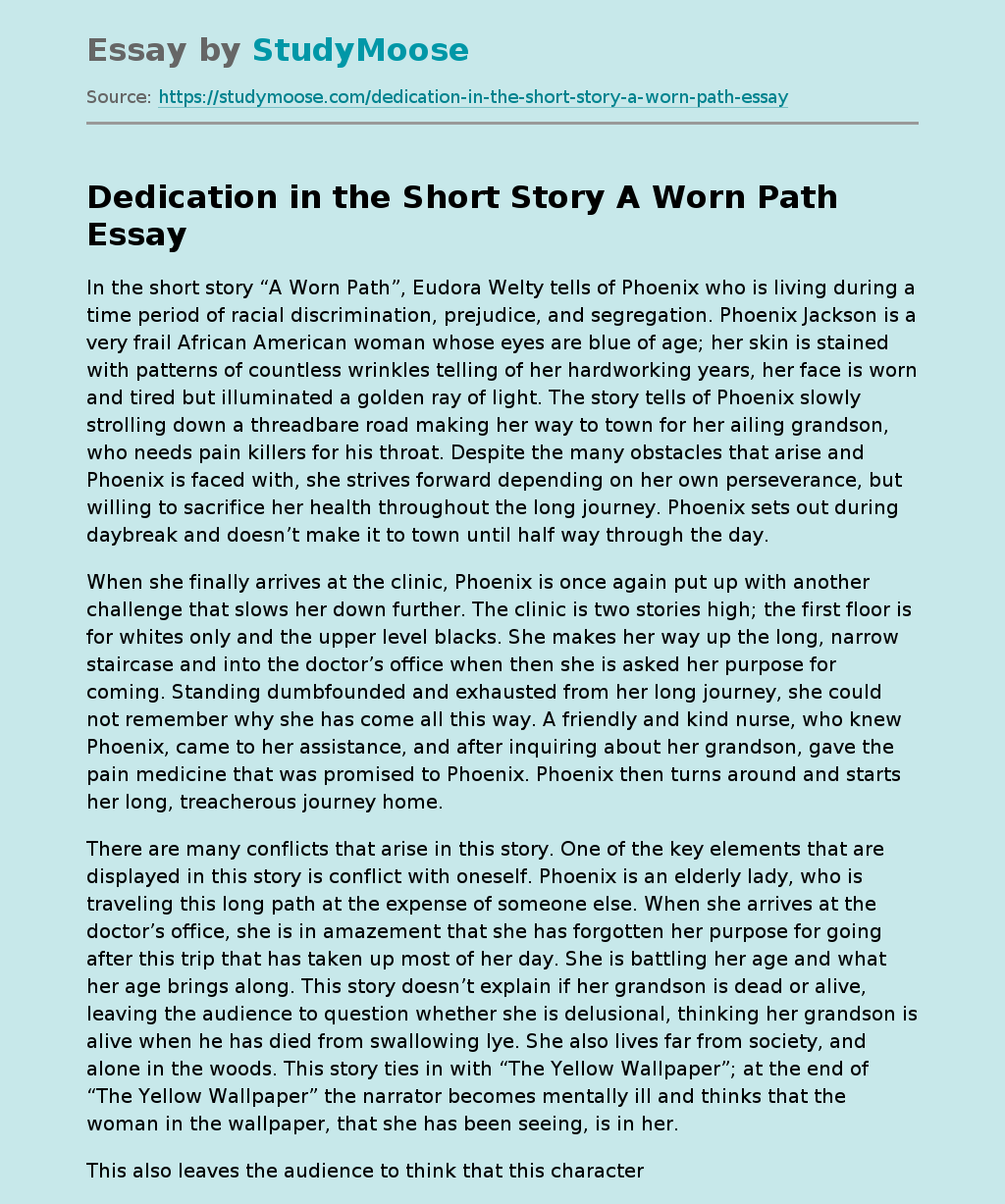