An assertive statement from the late Mahatma Gandhi pertaining to a person’s struggle that no matter how unfortunate a person’s circumstances may become, in the long run, a deserving achievement awaits him. I do agree to this statement. Everyone experiences similar kinds of battle, no matter how small it can be each in our own different ways. Frank McCourt, being the main character in his own memoir Angela’s Ashes, endeavors through his society and growing up.

Don't use plagiarized sources. Get your custom essay on
“ Analysis of the character of Frank McCourt in the story “Angela’s Ashes” ”
Get custom paper
NEW! smart matching with writer

Frank McCourt shared his own fight through his memoir Angela’s Ashes. The setting was mostly during the 1930’s in Ireland where inequalities among the rich and the poor were distinctively obvious. When he and his father, Malachy McCourt, went to a church and had him signed up to be an altar boy, the minister did not even bother to look at them and slammed the door right on their faces.

Not only had other people treated them badly but their own relatives as well. His mother’s relatives taunted him and his family in a different way although they were more supportive than his father’s relatives were. The grandmother always made dreadful remarks about how his mother married a useless man from the North of Ireland and how he got those “odd manners” form his father. These events clearly stated how society tormented him and his family by class distinction and conflicts between relatives and families.

Frank McCourt’s childhood was moved by a common factor–his eagerness to know the realities of life. He portrayed an Irish-American kid who lived in the Great Depression of the 1930’s in America and in the agonizing poverty of Ireland. He wanted to help his family from the poverty they were in, at a very young age. He say three of his six siblings died during his childhood. He had a father who was most of the time drunk and does nothing, literally, to establish a family. He had to risk school in order to earn shilling for his family. However, he had endured all of these hardships by heading back to America.

Frank McCourt’s dream was to return to America. In the end, he made his dream come true. When he was nineteen, he found a relatively good paying job as a delivery boy, invested his money, and bought himself a ticket going back to New York. He actually did “win” over the “laughs” of society and growing up.

Mahatma Gandhi’s statement certainly corroborated to Frank McCourt’s experiences. He won over his struggles by heading back to America and searched a better life for him and his family. The same thing that happened to our own struggles. That same feeling of achievement we had after we had gone through a tight situation or a problem. I really do believe to this statement by Mahatma Gandhi because I somehow experience a similar situation in my life, and I did win too, by the way.

Analysis of the character of Frank McCourt in the story "Angela's Ashes". (2016, Jul 04). Retrieved from https://studymoose.com/re-analysis-of-the-character-of-frank-mccourt-in-the-story-angelas-ashes-essay 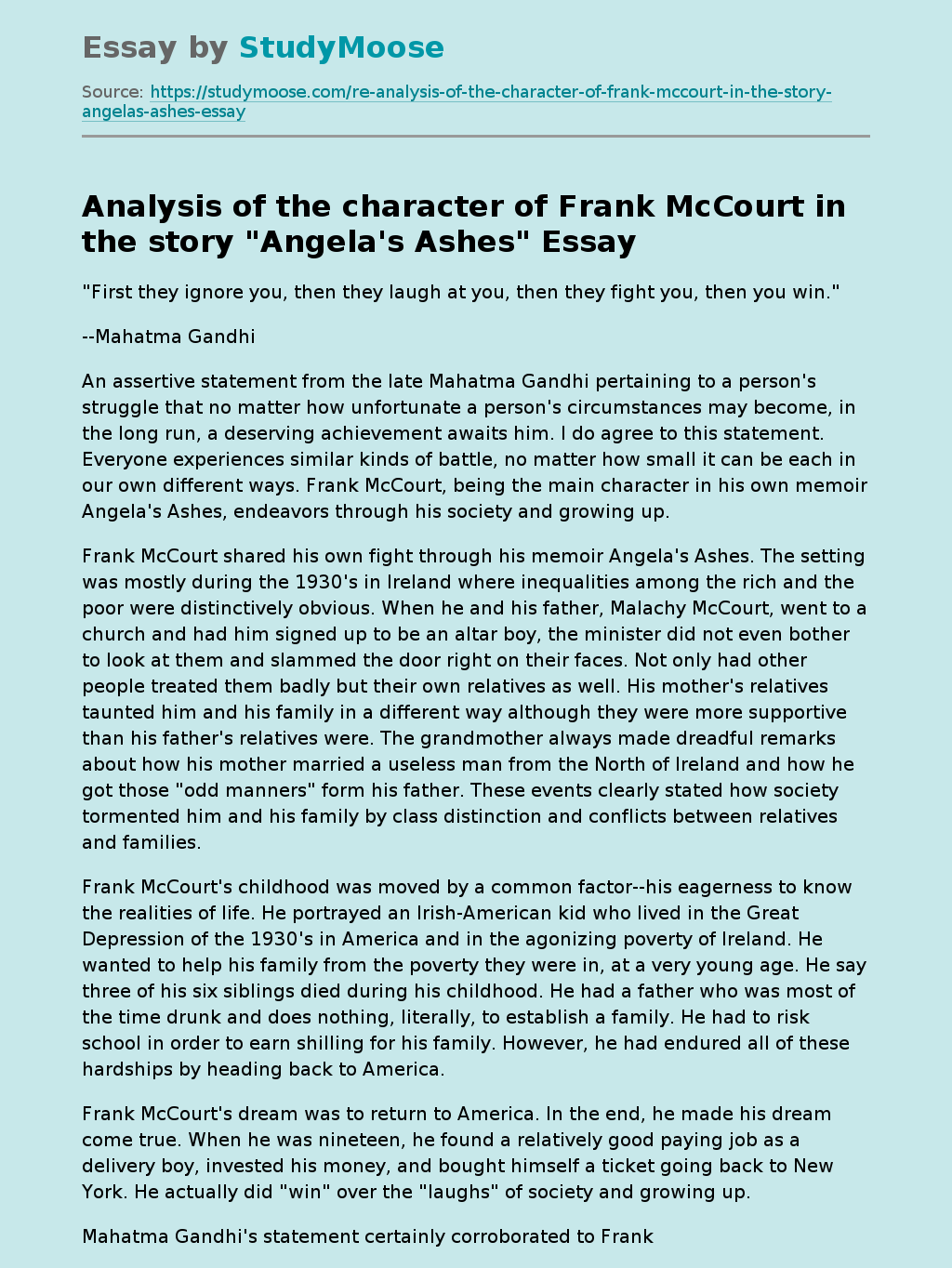