A Growing “Threat” to Society

The Internet is one of the most powerful sources of information today. Thus, it has the capacity to enlighten, as well as to mislead. This double-edged potential has turned the Internet into the latest avenue for terrorism. Terrorists are now harnessing the power of the Internet to wreak havoc among the public (Conway, 2002). Terrorists use the Internet mainly as a propaganda tool – it is a venue wherein they publicize their cause or explain their ideological justification without misinterpretation or censorship.

As of 2002, a majority of the 33 groups deemed foreign terrorist organizations by the United States State Department had their own web sites.

Don't use plagiarized sources. Get your custom essay on
“ A Growing “Threat” to Society ”
Get custom paper
NEW! smart matching with writer

There are also many other websites, that, despite not being related to any terrorist group, provide information on how to commit terrorist activities such as bomb-making. The latter often escape criminal prosecution due to the First Amendment, which guarantees freedom of speech to the general populace (Conway, 2002). The very idea of cyber-terrorism, however, is not without contention. For one, it is still not clear as to what differentiates cyber-terrorism from freedom of expression.

Also, there are certain Internet-related crimes that cannot be considered as cyber-terrorism, although they inflict damage upon the public. Indeed, terrorism in itself is already a notoriously difficult concept to define. The addition of computers to it further complicates the idea (Conway, 2002). The Internet: A New Weapon The Internet was originally intended as a means of resuming contact in the event of a nuclear attack. But due to its speed and convenience, it is currently a major venue for information, communication and commerce.

With just one click of a mouse, an entrepreneur in Germany can deposit funds to a bank account in Switzerland and talk to a London-based cousin face to face through a web camera. A student in California, meanwhile, can learn everything about the Great Wall of China with merely a few keystrokes. After 9/11 It was only after 9/11 that the very concept of cyber-terrorism was actually developed. Before 9/11, Internet-related crimes were usually in the form of sending pornographic email to minors, defacing web pages, stealing credit card information and launching computer viruses (Conway, 2002).

After 9/11, however, US officials realized that terrorist organizations could use the Internet to generate more bloodshed (Weimann, 2004). Al-Qaeda, for instance, could launch missiles or biological weapons to the US by simply pressing the “Enter” button of a laptop (Stohl, 2006). To a certain extent, the fears of the US were well-founded. In November 2000, an electronic attack was carried out from Pakistan against the Washington-based pro-Israeli lobbying group American Israel Public Affairs Committee (AIPAC).

Aside from defacing AIPAC’s site with anti-Israeli commentaries, the attacker likewise stole some 3,500 email addresses and 700 credit card numbers, sent anti-Israeli diatribes to the addresses and published the credit card data on the Internet. The Pakistani hacker, known by the alias “Dr. Nuker,” claimed responsibility for the incident. It turned out that “Dr. Hacker” was a founder of the Pakistani Hackerz Club, an organization whose objective was to “hack for the injustice going around the globe, especially with (sic) Muslims” (Conway, 2002).

The aforementioned cyber assault was not without precedent. The Lebanese Shiite Islamic group Hezbollah established its collection of web sites in 1995. At present, the group has three websites that can be viewed in either English or Arabic – one for its press office, another to describe its attacks on Israeli targets (http://www. moqawama. tv) and a third, Al-Manar TV, for news and information (http://www. manartv. com). These websites regularly provide the latest information about Hezbollah, including press statements, political declarations, photos, video and audio clips.

An email address is also provided as contact information (Conway, 2002). After 9/11, as a result, federal agents issued subpoenas and search warrants to almost every major Internet-based company, including America Online, MSN, Yahoo! and Google. In addition, many web sites were subjected to official closure by the Federal Bureau of Investigation (FBI). Included among those that were closed down were radical Internet radio shows such as “IRA Radio,” “Al Lewis Live” and “Our Americas. ” The “jihad web ring,” a collection of 55 jihad-related websites, lost dozens of its sites due to pullouts by Yahoo!

Lycos Europe, meanwhile, created a 20-person team to filter its websites for illegal activity and terrorist-related content (Conway, 2002). Cyber-terrorism: Is There Really Such Thing? One of the most common arguments against cyber-terrorism is that it is an imaginary threat (Lacey, 2007). Contrary to popular perception, there is a minimal chance that cyber-terrorists would exact harm on innocent people by attacking corporate and governmental computer networks. As of this moment, terrorist organizations use the Internet only for fundraising, communications and propaganda.

There is the possibility that terrorists might use computers as weaponry to a significant degree, but this will “probably happen in the (distant) future” (Conway, 2002). At present, terrorists would draw more attention to their cause by setting off bombs instead of hacking bytes (Conway, 2002). Instead of getting extremely paranoid about cyber-terrorism, the government should instead focus on eliminating cyber attacks against companies. As of July 2002, hackers had successfully launched at least 180,000 Internet attacks against more than 400 public, private, governmental and non-profit organizations.

The brunt of these attacks fell on the power and energy industries, as well as on the technology and financial services. If left unchecked, these cyber attacks would be very detrimental to consumers – in order to make up for their losses to hackers, owners of the above-mentioned industries will have to raise the prices of their products and services (Fishman, Jospehberg, Linn, Pollack, Victoriano, 2002). Conclusion Paranoia over cyber-terrorism is very dangerous. Aside from diverting attention from more serious crimes such as cyber attacks, it violates civil rights and liberties.

Under the guise of “fighting terrorism,” even websites whose only crime was to express radical ideas were closed down. While it is the duty of the state to safeguard its constituents from danger, doing so should not infringe their inalienable rights. It is true that terrorism might turn to cyberspace in the future in order to spread even more fear and bloodshed. But before the government rushes out to eliminate “cyber-terrorists,” it must first have a clear-cut concept of what constitutes cyber-terrorism and what makes a cyber-terrorist. Otherwise, the government will end up worse than the terrorists that it aims to get rid of.

A Growing “Threat” to Society. (2016, Aug 15). Retrieved from https://studymoose.com/re-a-growing-threat-to-society-essay 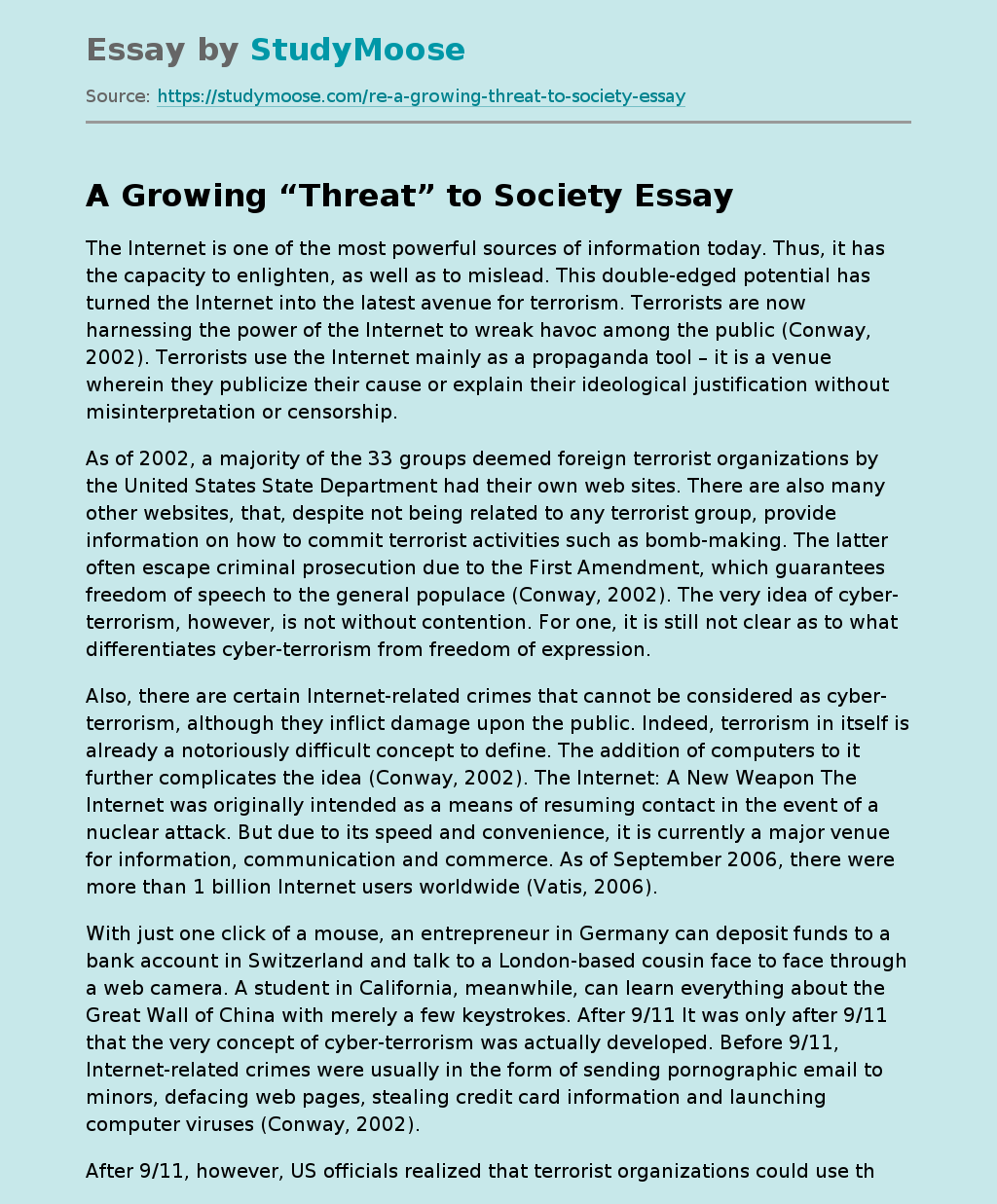