This paper analyzes tools used in financial analysis such as ratios. Financial ratio analysis is a judicious way for different stakeholders to use for different goals.

References used in this paper are from books and journal in a scholarly journal.

Don't use plagiarized sources. Get your custom essay on
“ Ratio and Financial Statement Analysis ”
Get custom paper
NEW! smart matching with writer

Presentation of the data and the methodology used are objective; they are supported by cases.

Is it possible to estimate or evaluate a company’s present and future performance? The answer is yes, but you need tools and learn how to use them. Financial ratio analysis is an excellent tool for companies to evaluate their financial health in order to identify feebleness so as to institute corrective measures. Financial ratios are first and foremost manager’s concern because they want to determine what divisions have performed well.

It is as well stockholders’ concern because they want to know the value of their stock. Financial ratio is used by creditor to determine whether they will receive the money the loaned to the firm (Parrino, Kindwell, & Bates, 2011).

“Financial analysis is used to analyze whether an entity is stable, solvent, liquid, or profitable enough to be invested in” (Financial Analysis, Investopedia). The purpose of financial statement analysis is to help users in predicting the future.

In other words, ratios are highly important profit tools that help to implement plans that improve profitability, liquidity, financial structure, reordering, leverage, and interest coverage. (Anonymous, 2000). Ratios are often able to help predict performance as well as provide indications of many potential problems. Despite the fact that financial ratio analysis can provide imminent problems of the company’s performance, some important limitation should be noted when using financial ratios. In fact, most financial ratios don’t tell the full story.

This paper will analyze the benefits and limitations of ratio analysis, explaining what factors impact the meaningfulness of such measures.

Financial ratio analysis is a useful tool for users of financial statement. According to parino et al (2011), ratio analysis simplifies the comprehension of financial statements. They inform the financial variation of the business. Thus, one of the advantages of using this tool is to acquire information about a business. For instance, the total debt ratio shows the use of debt in a firm’s capital structure. The higher the debt ratio, the more debt the company has.

Another benefit of using ratio analysis is that they facilitate comparison between different businesses, and between firms which differ in size. As an illustration, let compare the Price-Earning ratio (P/E) of two companies with different business. Recall that P/E ratio is the ratio most people are familiar with and helps one determine whether or not a stock is too expensive or a really good deal by looking at the earnings relative to stock price (Siegel, Shim, 2000).

As shown above, the ratio helps to gauge the trends of price-earnings of these for two different companies with different business; thus, the P/E ratio may help an investor to make decision.

Financial ratio can also bring to light a company’s performance, strengths and weak points. And so, the firm may looks up areas that would need additional effort, upgrading and analysis. For instance, a high ratio inventory turnover ratio could mean that the company has had unexpectedly strong sales — a good sign, or it could mean the firm is not managing its buying as well as it might and inventory that remains in place produces no revenue and increases the cost associated with maintaining those inventories

In addition, a ratio analysis provides an excellent and comprehensive tool that helps investment decisions in the case of investors and lending decision in the case of bankers. (Parrino, Kindwell, & Bates, 2011). An example of this will be a firm’s need of money to finance its asset. Creditors will look at company’s current ratio (current assets divide by current liabilities) to determine a company’s ability to weather financial crises, at least in short term. Loans are often attached to this ratio. In the same way, investor looks at company’s profitability ratios to measure how much profit a company generates when they are looking where to invest their money.

As can be seen, financial ratios are remarkably helpful indicators of a firm’s performance, and financial situation. Although ratios analyses are useful tool, they should be used prudently.

“Ratios are only as good as the data upon which they are based and the information with which they are compared.” (Kieso, Weygandt, Warfield, 2010) Thus, ratios analysis present some disadvantages.

First, ratios are insufficient in themselves as a source of evaluation about the future (Parrino et al, 2011). They just explain interactions involving past data while users are more interested about present and upcoming information (“Accounting for management”, 2011). Basically, they give a clue or sign of the business’ strengths and weak points, and that in short term. Therefore, they should be used as only one of analytical tools in the management. Not to mention that ratios are ineffective when used in isolation. Most financial ratios don’t tell the full story. They have to be put side by side over time for the same company or across company or with the sector’s average.

A single ratio actually does not make a consistent conclusion. It takes more than a ratio to be evaluated to obtain a suitable action, which makes ratio analyses a little bit complex. For example, the return on asset ratio (ROA), and the profit margin ratios do not incorporate opportunity cost of risk. Similarly, the return on equity ratio (ROE) ignores cost of capital investments required to generate earnings.

Another limitation is that ratio analysis depends on accounting data based on historical coast (Parino et al, 2011). According to Kiesel, the fact that ratio analysis is based on historical cost may lead to distortions in measuring performance. Given that the financial statement does not include any financial changes, a modification in price during the run period may not affect the calculated ratio. In fact, inaccurate assessments of the enterprise’s financial condition and performance can result from failing to incorporate fair value information ( Kieso and al, 2010)

The last limitation of ratio analysis but not the least is the inflation factor. The fact that different inventory valuation (FIFO, LIFO, Average cost) may be in use to run a business, when prices tend to rise (inflation factor) the choice of accounting method is able to dramatically affect valuation ratios. To put it differently, inflation may render the comparison of financial ratios inappropriate. For instance, one business may use FIFO while another may use LIFO. If this is the case, some of the ratios, such as inventory turnover, and gross profit margin, would be disparate if prices are rising. Another fact is that the variations of the ratios are shown to be acutely sensitive to recession (Kane, G.D, 1997). In his study, Kane, G.D affirms that value-relevance of many financial ratios are sensitive to the occurrence of recession.

As has been noted, accounting policies, and inflation are some factors that have effect on the calculation of ratios.

We can therefore argue that ratio analysis is practical tools for users of financial statement. Thus, it simplifies the understanding of financial report, it makes comparison between firms possible, it highlights a company’s performance, and it provides an appropriate tool that helps investor and creditors. We noted that financial ratios have some disadvantages. In fact, they are insufficient in themselves as a source of judgments; they are useless when used in isolation, and they can falsify comparisons when different accounting practices are used. All things considered, I will say that even if ratios analyses have concrete obstacles they still are the most useful tool in the financial world. The most important thing to keep in mind is to know how to use them, and understand their limitation.

Accounting for management, 2011. Retrieve from
http://accountingexplained.com/financial/ratios/advantages-limitations 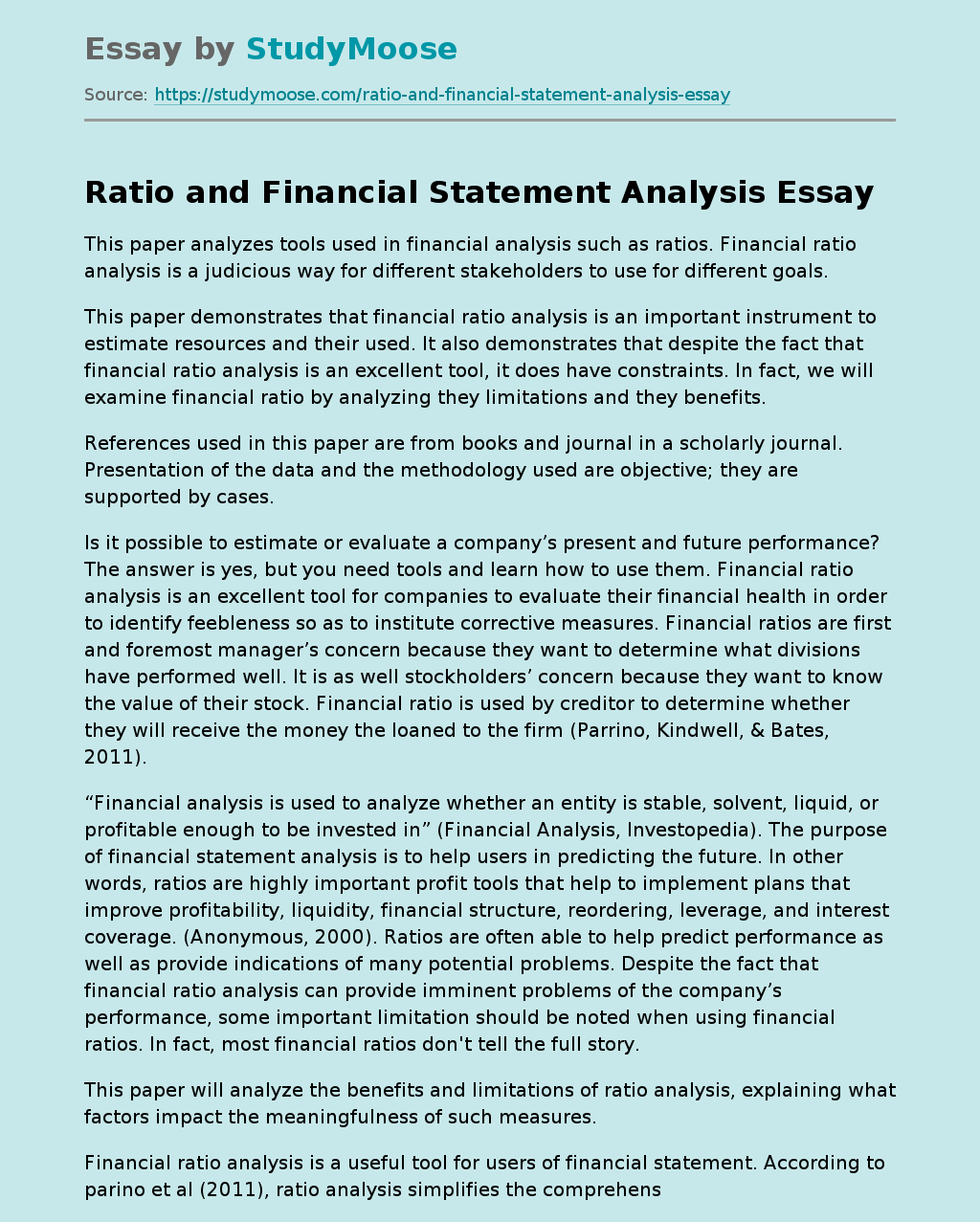