Pros and Cons of Television

Television is one invention that serves as a type of role model for Americans everywhere. This mechanism is in almost every room in our home and people can’t help but turn on the switch to see what is showing. Some only rely on a television as their only source of entertainment and some view it as a way to get the family together. But one thing for certain is that television has some characteristic that draws humans to the screen and most people reflect what they watch.

Turn in your highest-quality paper
Get a qualified writer to help you with
“ Pros and Cons of Television ”
Get high-quality paper
NEW! AI matching with writer

The television is an unavoidable technology that shapes people’s lives, on that can both benefit and harm its viewers.

Although television is unavoidable, it does have its benefits. Almost every American has one TV in one room of their home. The news channel is one of the most widely watched program in the world. People watch news as a source of what is happening during the day. Before work, a woman would turn on the news, to check how the weather is so she can pick out the right outfit.

Or some may check the news just to take a glance at traffic to see which roads to avoid in order to make it to work on time. The news also benefits children. It helps them understand what is going on in the world. “News, current events and historical programming can help make young people more aware of other cultures and people.” ( Media Education Resources, 18 Oct 2006. http://www.media-awareness.ca) Some news casts help by showing the latest threats in places or even in food reports, which are good things to be aware of.

Some people also find the joy in knowing about the latest product on the market or a brand new diet test. However, the news might not show decent programming for all audiences all the time.

The potential harm in television is the violence that is shown on almost every channel, but particularly in the news. The news is the place where most of the violence is shown and worse, the violence is real. The news reaches all audiences which means children are exposed to this violence. But the violence show is harmful to all its viewers. “Some local news shows go out of their way in search of violence.” (Online News Hour, 18 Oct 2006. http://www.pbs.org/newshour/media_violence.html) When kids witness violence on the news, it gives them ideas and it shapes their view on the world.

The same goes for young adults. Most of the violence on the news are by young adults who are in gangs or a student at school. Worse is that the violence is shown in detail and shows every act from explosions to gun shots, to fist fights. These kinds of scenes are not ones that should be exposed to young children and adults. “As more violence is reported in the news and as young children spend more time involved with media, they are more likely to hear disturbing news.” (National Association for the Education of Young Children, 18 Oct 2006. http://www.naeyc.org/ece/2003/01.asp) The news is a helpful program to have, but not when disturbing images are shown.

Most Americans who own a TV watch it for an excessive amount of hours, mainly children, so they are bound to see some amount of violence while watching. Some may stumble upon it on accident so they have those frightening images in their mind. Parents are concerned that their kids watch the violence because they are entertained by it. Some kids might have to watch news casts for homework assignments and find helpful information about the country they live in, but they also might see some of the dangers that are here as well. The fact is that the news has the habit of showing clips of “disturbance” during their supposed innocent broadcasts. Overall the news does have its advantages and its disadvantages just like television. The television is an unavoidable technology that shapes people’s lives, one that can both benefit and harm its viewers.

Pros and Cons of Television. (2016, Jul 20). Retrieved from https://studymoose.com/pros-and-cons-of-television-essay 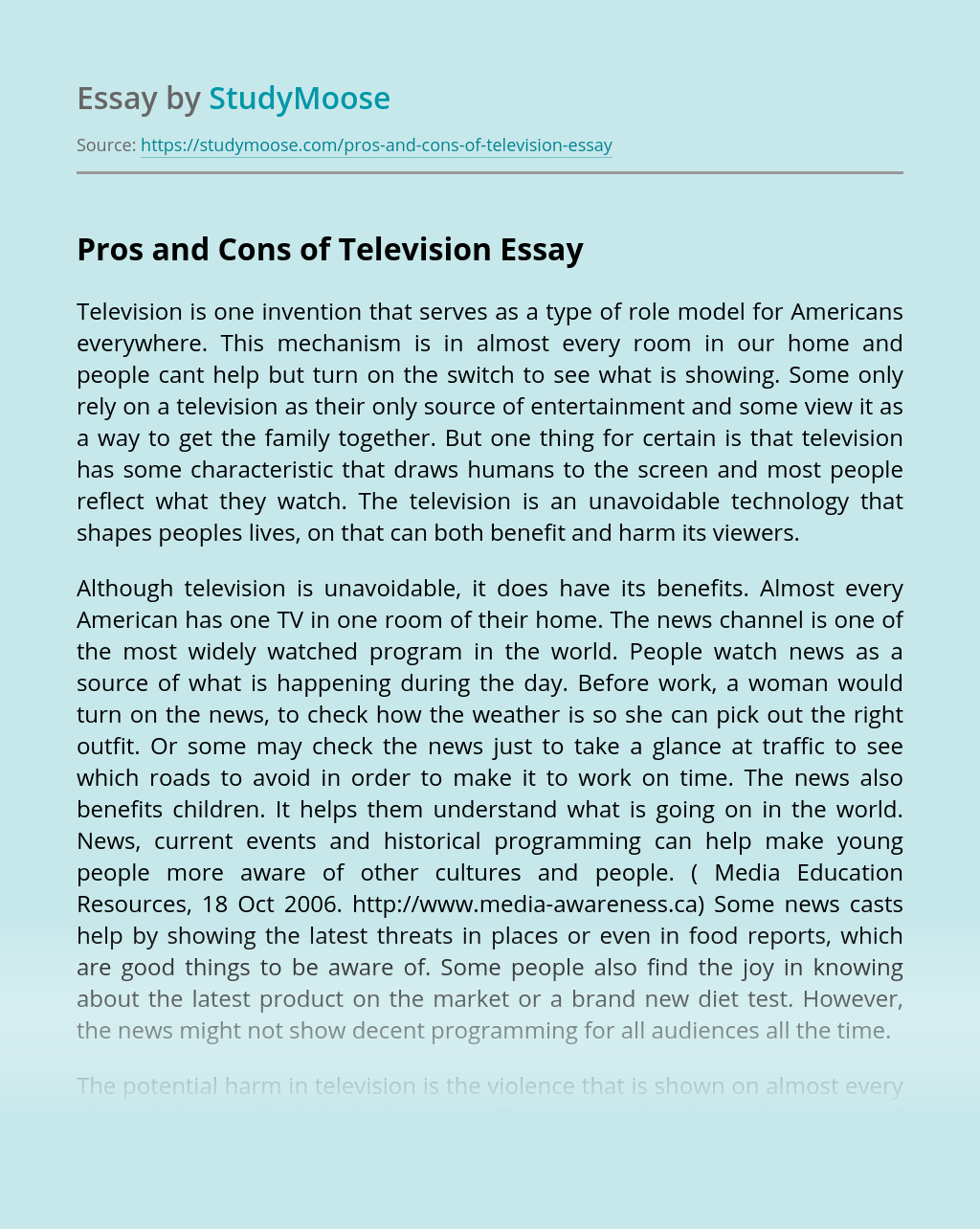 Turn in your highest-quality paper
Get a qualified writer to help you with
“ Pros and Cons of Television ”
Get high-quality paper
Helping students since 2015
Stay Safe, Stay Original