Pros and Cons of Illegal Immigration in US

The flow of illegal immigrants to the US has steadily risen since the end of World War II. Consequently, the proportion of immigrants in the entire population between 1960 and 2000 has more than increased. Since this era also coincided with a fourfold increase in violent crime and a doubling of rates of property crime, it may not be surprising that Americans hold powerful views on the effect of immigration on crime. Immigrants have entered the United States either through the frontier with Mexico, the Pacific Ocean, or through many other ways.

Don't use plagiarized sources. Get your custom essay on
“ Pros and Cons of Illegal Immigration in US ”
Get custom paper
NEW! smart matching with writer

Due to the increase of population and crime it doesn’t provide data on the immigration status of victims. Therefore, immigrants are not the cause of crime since immigration status of victims is unavailable (Spenkuch L. J, Understanding the Impact of Immigration on Crime.) A working paper from 2007 released by the National Bureau of Economic Research (NBER) concluded that immigrants who come to the country either self-select so that they are less likely to cause crime to begin with, or they have much more to lose by committing crime and therefore are more easily deterred.

In addition, crime rates could be affected by composition effects. Immigrants are mostly male, between the ages of 15 and 35 (US Census Bureau 2009), and these population groups are well known to be involved in criminal activity more frequently than others (Freeman 1999). Therefore, an invasion of immigrants can be expected to increase crime rates. Even if conditional observations on immigrants committing crime it doesn’t mean that natives aren’t apart of the increase of crime. Both equal may have propensities to commit crime. According to (Peter L. Martens, Immigrants as Victims of Crime) Immigrants more often than native Swedes have been a victim of personal crimes thus, immigrants can’t take all the accusation in the increase of crime since they may have much more to lose than natives.

Becker’s (1968) seminal work on the economic theory of crime points to two other mechanisms by which immigration can be expected to affect crime. In Becker’s words,

get by using his time and other resources at other activities. Some persons become

‘criminals,’ therefore, not because their basic motivation differs from that of other

Therefore, immigrants will have an impact on crime if immigrants’ outside options differ from those of natives, or if the expected utility from committing a crime differs between the two groups. Hence, the total number of crimes not only changes in such a case, but the crime rate changes as well. Immigrants are less educated, have lower incomes, and are less fluent in English than Americans (US Census Bureau 2009). Based on these facts, it suggests that immigrants’ returns from participation in the formal labor market are on average lower than those of natives. Thus, a rise in the share of immigrants in the population may lead to an increase in crime rates. As participation in the formal labor market is a more relevant outside option for crimes motivated by financial gain than for “crimes of passion”, it is reasonable to expect this mechanism to increase the property crime rate, but not necessarily the rate of violent crime.

Another channel through which immigration may affect crime are spill over effects. According to Borjas, Grogger and Hanson (2010), argue that immigration caused a decline in wages and employment among black men and thereby led to an increase in incarceration rates for this group. On the other side, the costs of committing a crime are possibly higher for immigrants than of natives. Then again why would immigrants be the cause of crimes? Not only do they face the same set of punishments as natives, they are also subject to deportation. Losing the right to reside legally in the US may be an important deterrent. Moreover, immigrants might be positively selected on various unobservable dimensions, with respect to non-cognitive skills or industriousness, and may have an inherently lower propensity to commit crime than natives. Moehling and Piehl (2009) study incarceration rates of immigrants and natives during the first half of the 20th century, uncovering only very small differences between the two groups. Similarly, Butcher and Piehl (1998a, 2007) find that since the 1980s immigrants are less likely to be incarcerated than natives, and attribute this finding to positive selection among immigrants. On the other hand, immigrants represent a disproportionate share of inmates with drug related offenses (Butcher and Piehl 2000). Grogger (1998) finds little evidence for spillover effects but Borjas, Grogger and Hanson (2010) argue that immigration caused unemployment and a decline in wages among black men, thereby leading to an increase in incarceration rates for this group. The paper most closely related to the present one is Butcher and Piehl (1998b). In a panel of forty-three metropolitan areas during the 1980s, they find no effect of immigration on overall rates of crime as well as on violent crime rates.

While immigrants are known to have lower levels of education, lower wages, and higher unemployment rates than natives, previous studies have not found a distinctive relationship between immigration and crime. While the rate of savage violations remains basically unaffected. Reliable with monetary hypothesis the impact of migration on wrongdoing is more grounded for violations propelled by monetary benefit, for example burglary or vehicle robbery, however not for ‘crimes of passion, for example, assault, and bothered strike. Also, the impact of migration is leaned more for workers from Mexico, who are almost certain than others to have poor work showcase results. A correlation between rising immigrants and crime statistics was encountered by previous research, however there is no direct causation as to rising immigrants and crime statistics. Some pros and cons can arise from immigration but are not directly influenced by immigrants.

Pros and Cons of Illegal Immigration in US. (2021, Feb 11). Retrieved from https://studymoose.com/pros-and-cons-of-illegal-immigration-in-us-essay 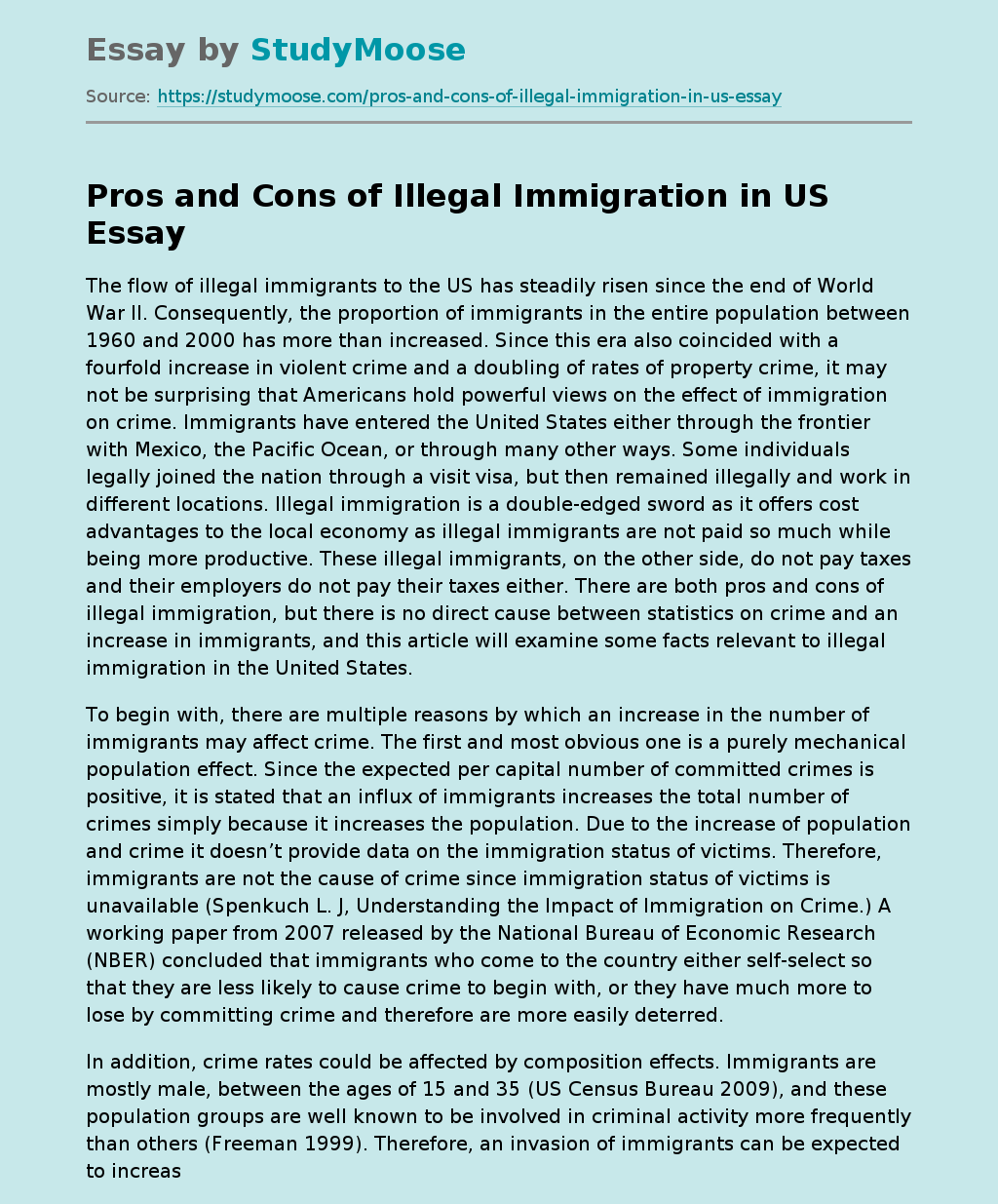