Disadvantages of Illegal Immigration in Malaysia

Turn in your highest-quality paper
Get a qualified writer to help you with
“ Disadvantages of Illegal Immigration in Malaysia ”
Get high-quality paper
NEW! AI matching with writer

It is important to state all the statistical data and the definition are referenced from the others sources as the purposes of statistical prove regarding to this study. Sources of data have been taken from Department of Statistics, Malaysia, journal, article and newspaper which content reliable data given by Ministry of Home Affair such as Borneo Post Online, Utusan Malaysia, The New Straits Times, THE WALL STREET JOURNAL and more.

Government need to provide food and health care to those illegal immigrants in the detention centre. According to the estimates released earlier in the month of 2014 by the home ministry, daily food and administrative costs for housing about 68,000 undocumented foreign workers in 10 detention centers across the country total nearly 2.4 million ringgit which are $731,000 and these expenses are still not included the medical expenses. If the medical expenses are included, the daily cost swells to 5.1 million ringgit. (THE WALL STREET JOURNAL, 21 Jan 2014).

Based on the estimates given by home ministry, if there are more than 68,000 illegal immigrants that need to take care in the detention centre, our government has to waste more than 5.1 million ringgit daily. This means that the money used by the government to take care about the illegal immigrants in the detention centre will definitely affect the economy growth rate of our country as the money are supposed to grow our country economy. This is a cause of concern to many Malaysians who would rather see such resources be put to better use for the benefit and welfare of the local poor.

Sabah was the state that faced most serious issues about the existence of illegal immigrants in our country. In years 2010, Sabah’s population was 3,117,405 with foreigners making up 27.81% of the total the population of Sabah as of the last census in 2010 as shown in Figure 1. (Statistics Department of Malaysia, 2011)

By referring to the Figure 1, it was found that the number of non-Malaysia citizen was the highest. This might be closely related to the issue of immigrants, since more than 27.8 per cent of the population is non-citizens. Despite that, the statistics only shows the official figures of non-citizens. The influx of illegal immigrants is also a huge issue in the state and their actual numbers are most likely not included in the statistics. It is estimated that there is a ratio of 1 illegal immigrant to 750 Sabahans based on the previous arrests.(Wan Hassan and Dollah, 2010).

If the amount of illegal immigrants in our country is keep on increasing, this will cost our country economy than getting benefits of having them in the country. As a result, existence of illegal immigrants will be a burden to ours government as it cost ours government on spending huge amount of public fund and will outweigh the economic benefits.

1) The New Straits Times, 12 April 2012, 3.1 million foreign workers in the country, of which two-thirds are illegal foreigners. Available at: http://www2.nst.com.my/nation/general/time-to-weed-out-the-illegals-1.73181/facebook-comments-7.87416

4) Royal Commission of Inquiry (RCI) on illegal immigrants in Sabah, 24 Feb 2013, RM 604 million spent to manage the foreign prisoners in Sabah’s four prisons in between the year of 2006 till Oct 2012

Disadvantages of Illegal Immigration in Malaysia. (2016, May 31). Retrieved from https://studymoose.com/disadvantages-of-illegal-immigration-in-malaysia-essay 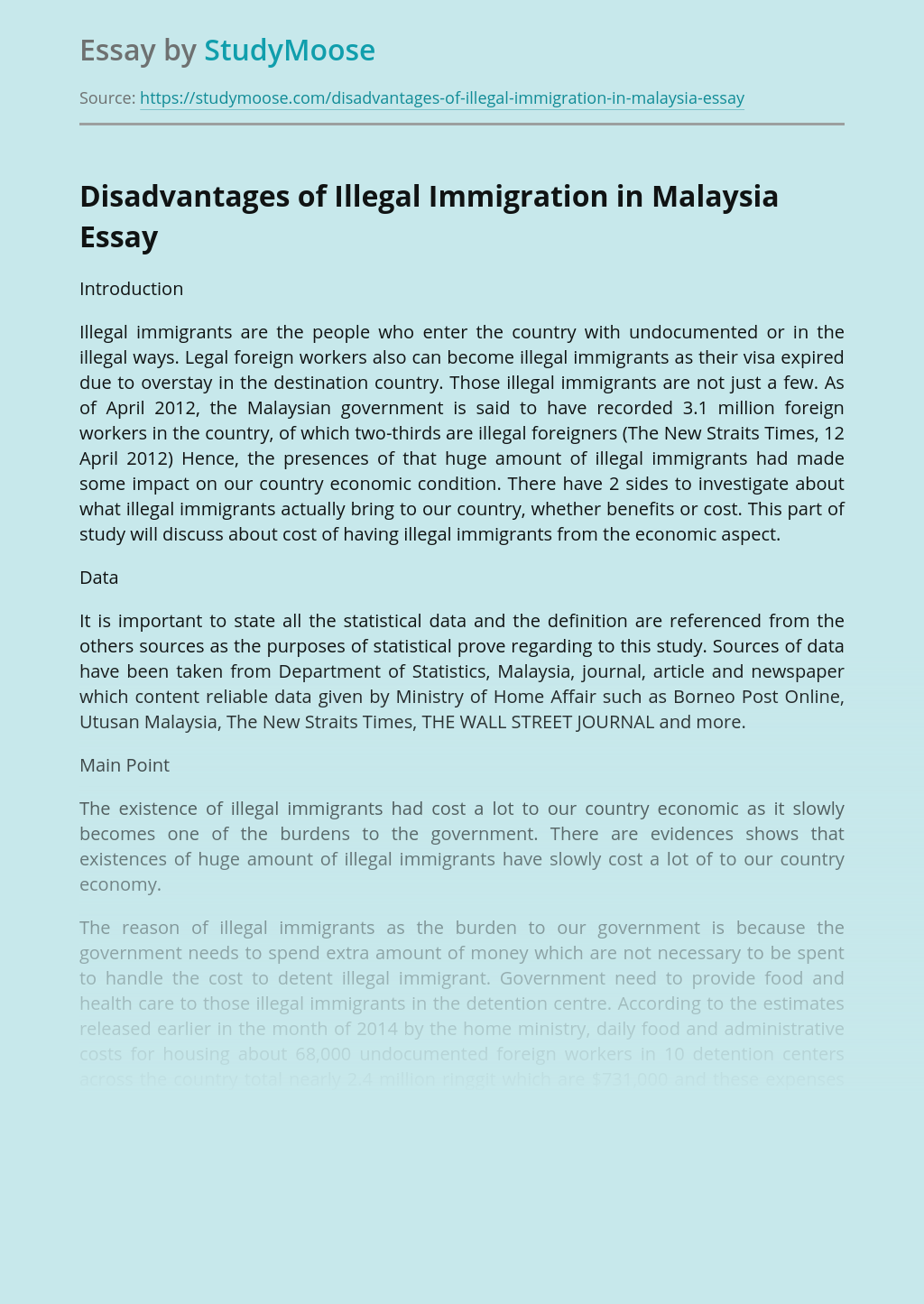 Turn in your highest-quality paper
Get a qualified writer to help you with
“ Disadvantages of Illegal Immigration in Malaysia ”
Get high-quality paper
Helping students since 2015
Stay Safe, Stay Original