Ladies and gentlemen, despite my better judgement, I would like to begin today with a confession. I am a chronic procrastinator. I procrastinate on almost all of my school assignments and assigned tasks in my day-to-day life. In fact, I even waited until the last minute to write this speech.

I am here today, however, to convince you that this is not necessarily a negative thing. In fact, procrastination is a very common habit among students and people in general, and, for those people who do procrastinate; it often has some positive effects.

Don't use plagiarized sources. Get your custom essay on
“ Procrastination (Speech) ”
Get custom paper
NEW! smart matching with writer

I believe that procrastination has, unfortunately, developed a bad connotation over the years. Too often is it associated with stereotypical slackers, who are too lazy to do the work before the last minute.

This of course is not true and I am personally offended by this association because I am not a slacker. Those people who do procrastinate have just chosen to go about life in a different method that is more convenient for them.

Rather than planning out their lives, these people live in a day-by-day, short-term situation, and this makes them happy.

As far as I’m concerned putting off things you can do today until tomorrow isn’t a bad thing. One must consider that maybe I’m just pacing myself, making sure I don’t take on too much, giving my life a chance to catch its breath. When viewed this way, it would seem that, contrary to popular belief, procrastination reduces stress.

I’ve heard many people who are of the opinion that they “suffer” from procrastination.

But is it procrastination or just plan guilt? I think it’s the latter. People labour under the belief that procrastination is bad, and that if they don’t space out their work, it will make the task more difficult. The problem lies in the fact that when one spaces work out over time, it leaves them with no time that is free.

I think that it is best expressed in the line: When in doubt, waits it out. Take a breath. Don’t be in such a hurry to fix whatever ails you this very minute. Sometimes the answers you seek are waiting for you to shut up, sit still, and rest. Stop working and continue later.

This brings me back to the benefits of procrastination. By procrastinating, people are able to maximize the resting period and little free time that they either have or create by putting something else off. Sometimes it is far more beneficial to one’s health if one stops working for the time being and simply reflects. So long as one is ale to complete the task at some later date, there is no reason not too wait and do so.

Another benefit is that by procrastinating, people get to avoid unpleasant tasks a moment longer. When people are faced with an unpleasant task, they often feel increased levels of stress, regardless as to whether the deadline is tomorrow or next week. By putting off the task, the stress level is reduced for the time being, but by working on the task progressively, the stress is spaced out and present over a long time. Take for example Bob: Bob becomes anxious when he thinks about doing his takes. His anxiety increases when he begins working on his taxes. When he works on them for several days, he remains anxious over the entire course of these days. When he avoids doing his taxes, his anxiety is reduced. Therefore it becomes clear that if Bob does his taxes on some later date, and if he does them all at once, he will reduce the duration of his anxiety.

From this example, you may be asking why Bob doesn’t just do his taxes all at once right away. The answer is this: Bob, like many people, is intimidated by the daunting difficulty of the task before him, be it taxes, an essay or a school project. Rather than trying to undertake the task now, when he feels he is less prepared, he would rather wait until after more time has been taken to prepare. By waiting he is able better ready himself for what he has to do, and maximize the use of the time he has before the deadline by enjoying himself with more pleasant activities.

Finally, it is often found by some that when they procrastinate, they are able to do better rather than worse. They find that on tasks such as papers and essays, material learned closer to the deadline is generally more useful for writing a paper. In addition, the imposed deadline motivates many procrastinators and makes them more efficient. Because of strict and limited time constraints, continual procrastination develops the skills necessary for completing tasks in a manner that is fast and effective. Such skills are quite beneficial throughout life.

In the end, it must be realized that procrastination is not always a negative thing and for many, it is quite beneficial. It allows people to have more free time, preparation time, reflection time, reduced stress, and develops skills of efficiency. This being said, the purpose of this speech is not to convince you to immediately start procrastinating on all of life’s tasks. Rather, it is meant to convey to you that procrastination’s detrimental connotation is false. As individuals, you must keep in mind the fact that procrastination is effective only for some, and if the short-term lifestyle it promotes is not something you are accustomed to, it could have negative consequences. I leave you with a quotation from Aaron Burr “Never do today what you can put off till tomorrow. Delay may give clearer light as to what is best to be done.” 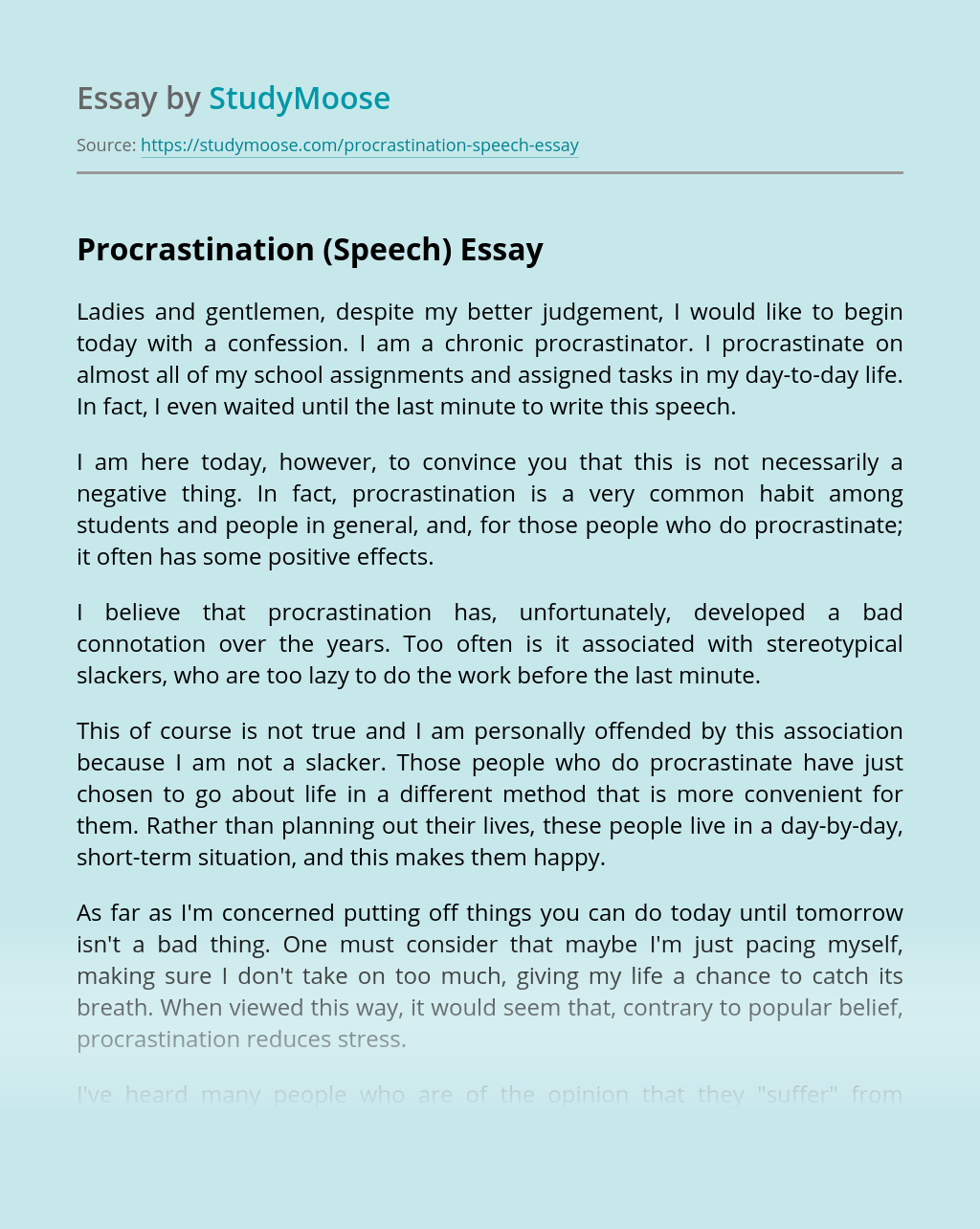