Hamlet's procrastination: a study on his failure to act

Hamlet is a play written by William Shakespeare, between the years of 1599 and 1601, under the reign of King James I. The play, set in the kingdom of Denmark, recounts the tragic tale of how Prince Hamlet enacts revenge on his Uncle Claudius, for murdering his father, (King Hamlet), marrying Gertrude, (his widowed mother, King Hamlet’s wife), and succeeding to heir of the throne. The tragic flaw, (Hamartia), of the protagonist Hamlet, is arguably his procrastination in the enactment of his revenge.

Don't use plagiarized sources. Get your custom essay on
“ Hamlet’s procrastination: a study on his failure to act ”
Get custom paper
NEW! smart matching with writer

Throughout the play, Hamlet had many opportunities to avenge his father’s death by murdering Claudius; however, there was always seemed to be something restricting him. There are many reasons as to why Hamlet may have delayed the revenge: be it the fact that Hamlet feared the consequence of killing, maybe he doubted the ghost, it could be that Hamlet didn’t want to hurt his mother, or maybe even the fact that he was a renaissance Prince, and didn’t believe in violence.

Hamlet’s procrastination cannot be proved by either one of these theories, but rather, a complex combination of them all.

The most notable reasons as to why Hamlet delayed in the killing of Claudius are because he doubted the nature of the ghost, and the consequence that came with killing another man, and because he did not want to hurt his mother. Whatever the case, it is quite evident that Hamlet procrastinated the avenging of his father’s death, thereby causing the deaths of Gertrude, Laertes, Polonius, Rosencrantz and Guildenstern, and most importantly, himself; this procrastination – no other factor – is refutably Hamlet’s tragic flaw.

At the beginning of the play, the ghost presented itself.

No one knew who, or what the ghost wanted. It was Horatio who had to speak to the ghost: “If thou art privy to thy country’s fate, / Which, happily, foreknowing may avoid, / O, speak! / Or if thou hast uphoarded in thy life / Extorted treasure in the womb of earth, / For which, they say, you spirits oft walk in death, / Speak of it: stay, and speak” (Shakespeare 1. 1). Hamlet was not sure however who the ghost really was. Following his religious beliefs, Hamlet may have easily interpreted the ghost as being an evil spirit.

To determine whether Claudius was guilty of killing his father, and furthermore clarify the identity of the ghost, Hamlet conducted a play, in which the murder of his father was re-enacted. This play, known as the murder of Gonzago, was directed by Hamlet in which Horatio, would observe the reaction of Claudius. If Claudius would become hesitant, Hamlet would then know, the ghost spoke the truth: “I’ll have grounds / more relative than this – the play’s the thing / wherein I’ll catch the conscience of the king” (Shakespeare 2. 2).

Horatio observed that Claudius did react hesitantly, and therefore, Hamlet now knew that Claudius was guilty. Hamlet was quite religious. This is seen in the prayer scene: “Now might I do it pat, now he is praying; /And now I’ll do’t. And so he goes to heaven; / And so am I revenged. That would be scann’d: / A villain kills my father; and for that, / I, his sole son, do this same villain send / To heaven. ” (Shakespeare 3. 3. 77-82). This quote explains to the audience that Hamlet is very religious; he fears the result of killing.

If he was to kill Claudius while Claudius himself was praying, Claudius would have been sent to heaven, (as his soul was cleansed), and Hamlet would have been forced to suffer the sin of killing. And finally, the last possible reason was that Hamlet did not want to hurt his mother. Hamlet did not want to upset his mother, especially after the ghost, Hamlet’s father, warned Hamlet to not hurt her in any way. Hamlet said, “will speak daggers to her, / but use none” (Shakespeare 3. 2). This indicated Hamlet’s protection to his mother.

He spoke to her in an abrupt tone at times, but never physically treated her in any such way. Hamlet didn’t want to kill Claudius because he didn’t want to see his mother suffer a loss of another loved one. Sigmund Freud, a great scholar, goes deeper than this, and explains the situation as, “Oedipus Complex. ” Freud explains that Hamlet is in love with his mother. In Shakespearean time, incest was not publicly acceptable. Claudius was the only person that was forcing Hamlet to not have sexual relations with his mother.

Hamlet, in his subconscious mind, had a desire to do exactly what his uncle had done; that is, get rid of the husband so that he can have Gertrude for himself. If that is true, Hamlet cannot act because he is fighting against his subconscious; he knows he wants something that is entirely evil, and if he were to go through with it, he would be no better than Claudius. Freud continues this analogy with the fact that Hamlet is only able to kill Claudius at the end of the play, because his mother has just died. Therefore, Claudius serves no further purpose, and Hamlet can complete his revenge.

Throughout the play, it is quite evident that Hamlet’s tragic flaw is his procrastination in the avenging of his father’s death. Most scholars tend to agree with the fact that the, “Oedipus Complex,” seems to be most logical in the explanation of his procrastination; still, some critics believe that Hamlet simply thinks too much. He wants the murder of the King to be perfect. Claudius has to go to hell. The people have to know about the murderer Claudius. Hamlet spends too much time planning and not enough time doing; thus, making the King’s murder more complicated than other murders he has orchestrated.

This procrastination is ultimately responsible for the deaths of most major characters, and the entire outcome of the play. Had Hamlet enacted his revenge at the beginning of the play, the play as a whole would have been un-existent. Not until everybody is dying, including himself, does he realize that he should not have waited so long. He understands the consequences of his delay, and all of his pent-up rage explodes, and he murders the King; getting the revenge he was after from the beginning. It seems at this point, however, that it is no revenge at all, but simply the last tragic mistake of lifeless indecision.

Hamlet's procrastination: a study on his failure to act. (2021, May 26). Retrieved from https://studymoose.com/hamlets-procrastination-a-study-on-his-failure-to-act-essay 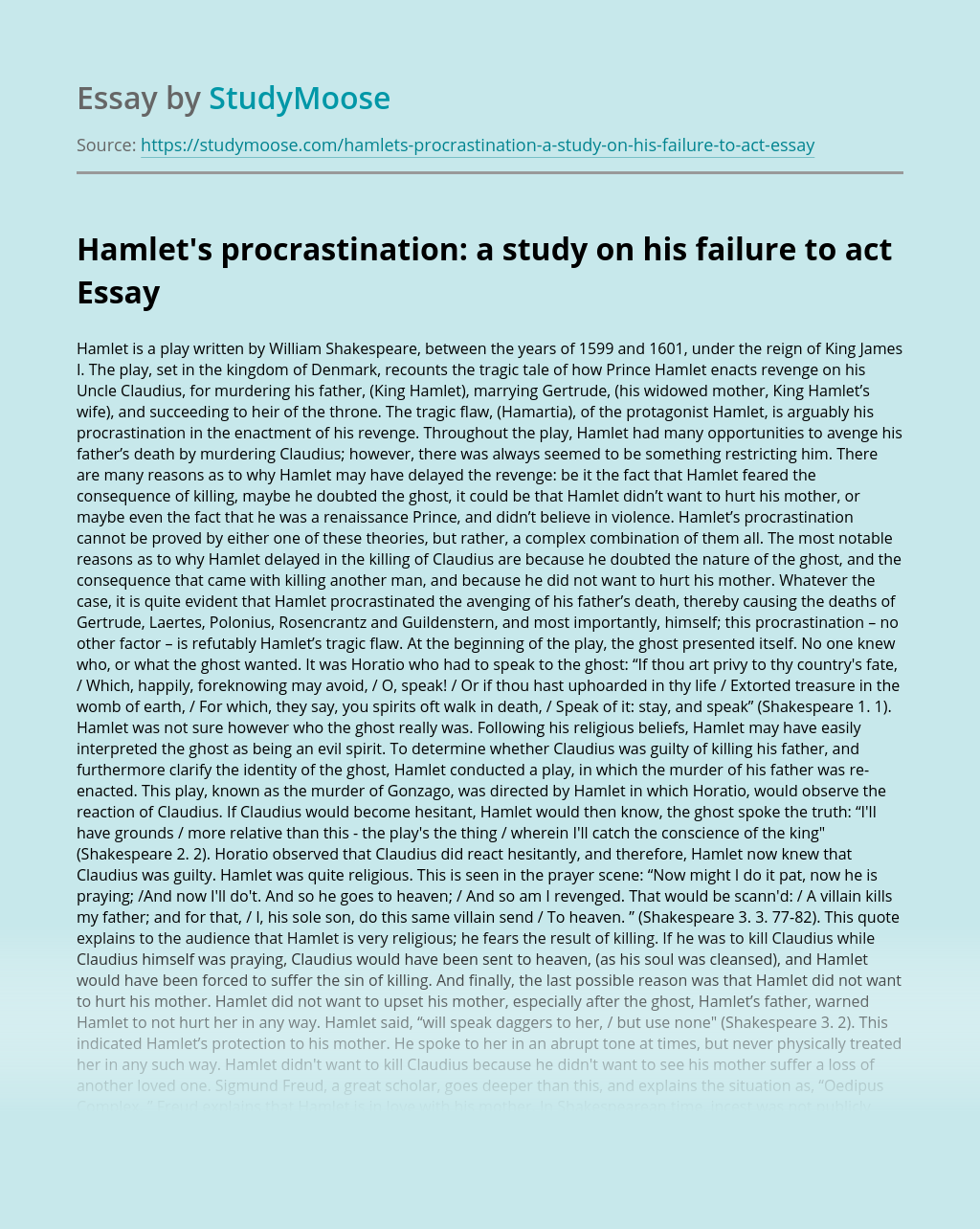