Problems of society in To Kill a Mockingbird

To Kill a Mockingbird (TKAM), a novel written by Harper Lee, follows the journey of six year old Jean Louise Finch (Scout), a young girl growing up in a society of hatred that relies on a false sense of strength, conformity and high expectations. More specifically, Lee focuses on gender stereotypes and inequality forced upon Scout and Jem and the false sense of strength a gun gives a man. Published on the 11th of July 1960, Harper Lee uses this book to explore her concerns of issues present in society in such a way that her audience can understand and react to.

Don't use plagiarized sources. Get your custom essay on
“ Problems of society in To Kill a Mockingbird ”
Get custom paper
NEW! smart matching with writer

She holds the expectation that we will come to a realisation that we can relate ourselves and our personal and societal condition to that occurring in the fictional town of Maycomb, Alabama.

Harper Lee wished to depict heavily enforced gender expectations in her novel to reflect how she was brought up in 1930’s and 40’s Alabama. To get across her message she uses Scout, a six year old girl who is pressured into becoming a lady at such a young age.

In Scout’s uninformed mind the word girl is the absolute worst adjective that could be used to describe her. Girls “dress properly” and don’t get to play outside or do anything worthwhile. In Scout’s eyes the worst thing about “being a girl” is the heavily enforced expectation to be “ladylike” which is imposed by her Aunt Alexandra. When Scout’s life is suddenly intruded by Aunt Alexandra who starts campaigning to turn her “ignorant child” of a niece into a “young lady” Scout does anything but oblige.

Scout’s tone when talking about her aunt is one which is naive and ironic, showing her outright hatred towards her aunt due to the confusing gender roles being laid upon her. This is due to her upbringing by Atticus -a stern minded logicist- as her role model and maternal parent. Since Scout looks up to Atticus and Jem she seems to take on a similar personality and similar morals to them making her more boyish much to the dislike of many people in her community.

Jem, unknowingly is the biggest enforcer of Scout’s tomboyish behaviours. Such as later on in the novel, Jem yells at Scout claiming she becomes “more and more like a girl everyday” and for doing so she should “shut her trap”. Harper Lee uses similar quotations throughout the novel, using repetition of a similar phrase for the duration of it such as “better change your ways”, “a lady” and “she’s just a girl”. Scout is constantly called “a girl” in a non-endearing way, but in a more weakening manner, to make her feel worthless. Readers become aware in a rather shocking way of the outright misogyny in the novel and Lee does this to provoke thought and awareness of the square minds that the readers may be accepting of, having grown up in a society which accepts this common outrage.

With the emergence of criminals and gangsters in 1920 and 1930 America, general society became more scared of a man with a gun than a man on trial for murder gracing their hometowns. Harper Lee reflects this false security that a gun gives a man in TKAM as even though citizens such as Sheriff Heck Tate and Atticus have access to guns, they recognise that “courage is not a man with a gun in his hand”. This is majorly evident when Atticus pulls a gun on old Tim Johnson, the “mad dog” limping down the street.

The dog is seen as dangerous and was described to “shiver like a horse shedding flies”. Harper Lee included a use of simile to show the intensity of this scene and the imminent threat that Tim Johnson imposes. Atticus only retrieves a gun and kills the dog as he has no choice, he was limping to the Radley’s home. Tim Johnson can also be seen as a use of symbolism – being that he is representative of all the corruption and dishonesty in Maycomb county and Atticus killing the dog symbolises his fight in Tom Robinson’s case to free him and end said hate. Here we realise the false sense of security a gun offers to an individual as Atticus shooting Tim Johnson was symbolic of something which he holds in much higher regard and gains him more respect than a gun ever could.

After Atticus kills the dog Jem questions how his father was “the deadest shot in the county” as in his and Scout’s minds he was “old and feeble”. Lee includes this in her novel for us to realise that a physical weapon or any frivillous object will never gain you the amount of respect that a courageous act will, as firing a gun requires much less courage than daring to go against societal expectations for the greater good.

TKAM achieves its purpose of expressing Harper Lee’s concerns through the illumination of specific issues that she believe awareness needs to be raised for. Two of which include the disgusting display of misogyny in everyday society, along with a false sense of hope a weapon provides to any citizens of the world – which is recognised by Atticus. Lee aids us in coming to recognise these issues in our own society and how they affect us in our daily lives and by doing so achieves her aim in writing the novel.

Problems of society in To Kill a Mockingbird. (2019, Dec 04). Retrieved from https://studymoose.com/problems-of-society-in-to-kill-a-mockingbird-essay?post 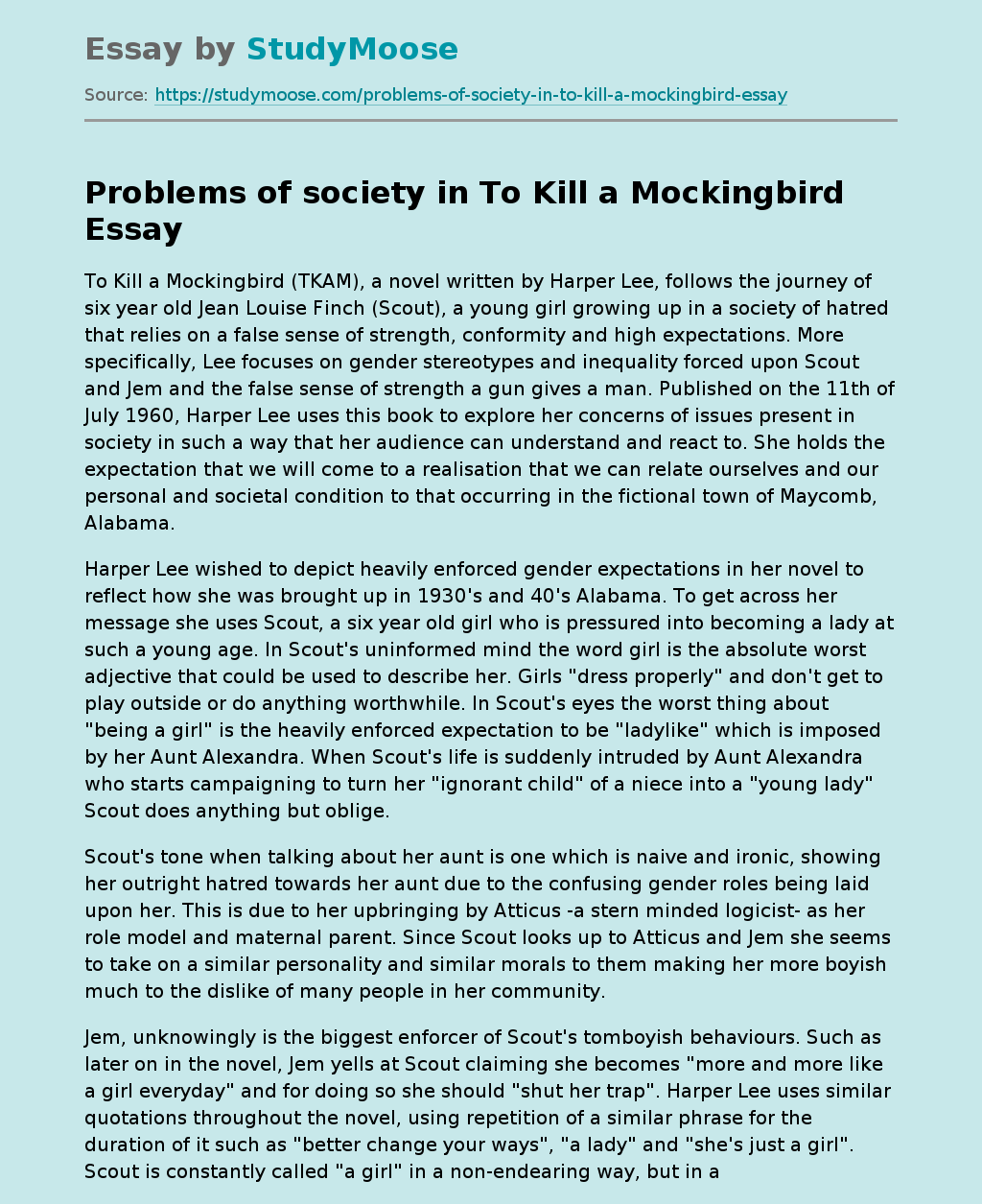