Slavery was at its peak both economically and controversially during the 19th century. The proslavery forces of the south proposed many arguments to defend their institution that they held dear. Legal, religion, and economic arguments were all used to justify their support of slavery. The largest defense of slavery came from the political aspects of it.

Legal arguments and defenses were used more frequently than any means of support. The largest attempts to save slavery came through compromises. Many famous compromises aroused during the 19th century over slavery and the territories.

The compromise that stands out more than any other was the Missouri Compromise of 1820 which stated that any new territory above 36°30″ would be free, and any territory south of that line would be slave. This settled the argument of slavery for a little while and was a great way of temporarily preserving their institution. Another argument used in support of slavery was that slaves were property, and individuals had the constitutional right to their property.

With this defense, it gave them a constitutional advantage. Another famous decision in favor of the South was the Dred Scott decision. This Supreme Court decision allowed proslavery forces to use the argument that blacks were not people; therefore they had no constitutional rights including freedom. This was another constitutional advantage that came from a Supreme Court interpretation of the constitution. The south presented a formidable argument to preserve slavery with these legal arguments; however there were also the economic and religious aspects to take into consideration as well.

There were many economical aspects to the question over slavery. The south presented the necessity of slave labor for prosperity as one example. Without the use of slavery, plantations and cash crops wouldn’t have succeeded nearly as well because there was simply not enough man power to equal the labor that the slaves put in. This would have affected the whole nation but more predominantly the south because cash crops were their most significant economic activity by far. Another argument was that slavery would never expand north because they had no use for land north of the 36°30″ line because it simply wasn’t fit for producing cash crops or housing plantations.

Only the southern lands were fertile and climatic enough to meet their needs. One more significant economic argument used to back up slavery was slaves were treated better working on plantations than free blacks were in the north. Plantation owners wanted to keep excellent care for their slaves because without high moral and work force, they would be useless. Therefore, plantations offered 3 meals a day, housing, and many other perks for slaves in which most free blacks couldn’t gain on their small incomes. This was a chief point often made by the south. Religion also played a key role for southerners and their fight to defend slavery.

Slavery was often defended by Christianity and religion in the South. Southerners often used the Bible itself to justify slavery, citing how slavery has always existed from biblical times to what was their present day. They argued that it was a fact of life and was meant to be. Proslavery forces even went to the extreme in saying that Jesus himself found nothing wrong with slavery and he too accepted and embraced it. Never once was there a citing in the Bible of Jesus’ frustration with slavery they argued.

All in all, the South presented a very strong case in support of their ideals. By incorporating all of these religious, economic, and legal aspects into their defense, they offered a persuasive defense of their sacred institution. 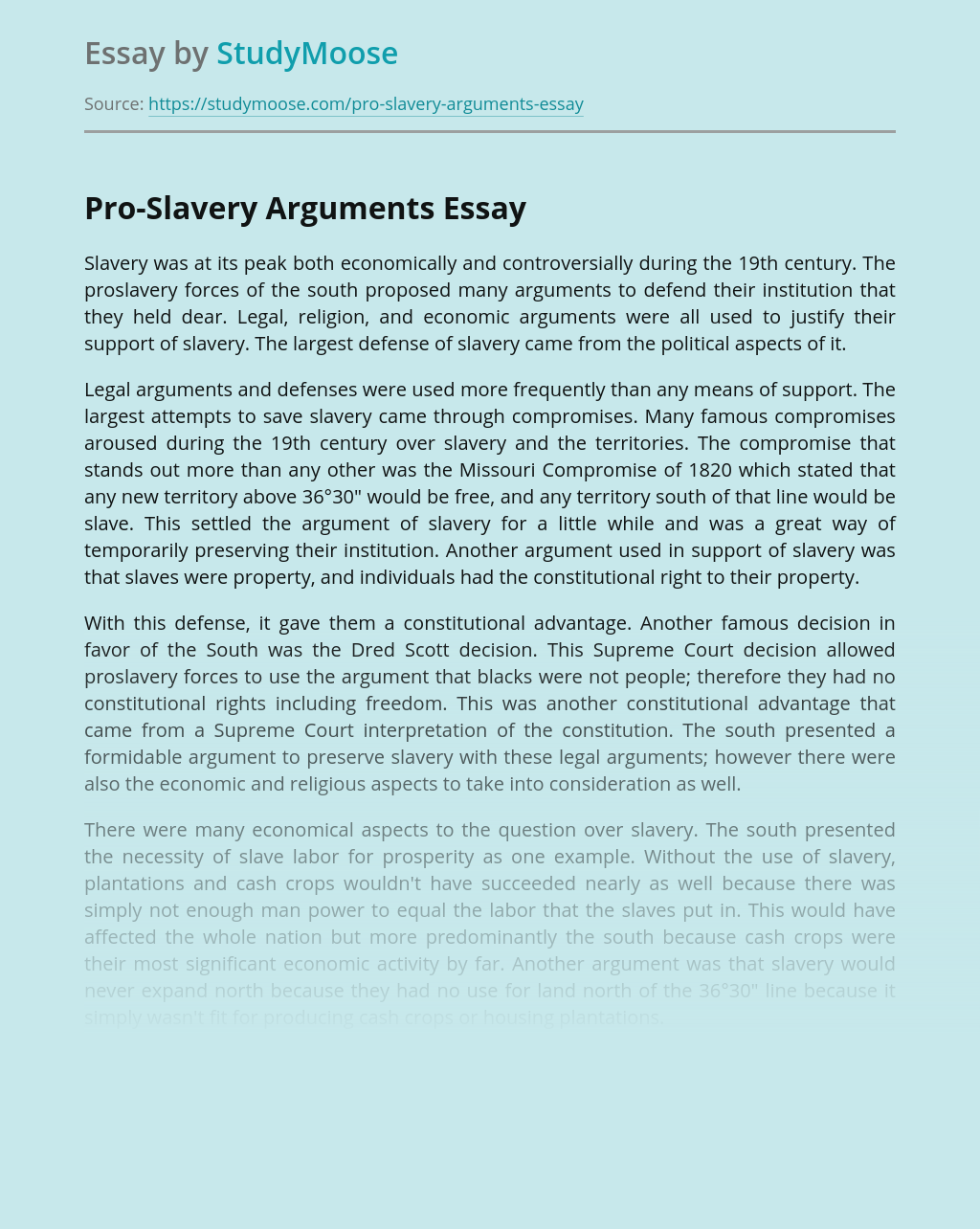