The concept of using fresh edible flowers in cooking is not new. Today, many restaurants use different flowers in their ingredients for an exotic taste and for a touch of elegance. Some flowers are used for deserts; different flowers are mixed together in making salads. But who could have guessed that with the use of creativity, its sweet juice can be made into a delicious thirst quencher.

Don't use plagiarized sources.
Get Your Custom Essay on Preparation Ixora Coccinea Linn Flowers for Beverage Just from $13,9/Page

The researchers were reminded of this activity when they saw a television commercial showing that the nectar was being sipped by the adult and the child trying the same. It gave the researchers an idea of using santan flowers in making a juice that would be healthy, nutritious and delicious that can be an alternative taste quenchers for carbonated drinks or softdrinks found harmful to our body.

In studies made, it was found out that too much intake of soda drinks can cause diabetes, obesity and bone loss.

Statement of the Problem The researchers sought to answer the following questions:

Significance of the Study With this study, the researchers can learn that Ixora Coccinea Linn (Santan) flowers are not only used for decoration and displays, but are also used to create a delectable food and drink. Many thirst quenchers that are in the market today, like carbonated drinks, may harm our body. So the researchers made it possible for you to try something new that can quench your thirst, satisfy your taste buds that is sure to be unique tasting and healthy. The community will have a discovery of the beautiful taste of santan flowers and gain more knowledge and creativity on its uses and what they can make out of it. Filipinos will have a new and refreshingly healthy juice made of santan flowers which are sure to attract people. We will have an original and delicious tasting drink which can be enjoyed by every member of the family.

Scope and Limitation of the Study The group tried to come up with information that could help them figure more about the nature of the santan juice for about a month. Each member of the group got the information they needed from the Internet.

The group used numerous orange santan flowers. These flowers were boiled and used its juice as the product. The group did not spend much since the materials they need are found in the surrounding and in their residences. The santan juice as a product would have not been completed without the tools and techniques involved. The tools used in different techniques involved in making the santan juice were saucepan, strainer, flavorings (calamansi extract and sugar) and water. The techniques that were used were cleaning, heating, and extracting activities.

Collection and Preparation of Materials Ixora Coccinea Linn flowers (santan) were collected from the neighboring residences. The petals were washed thoroughly and dried. Three cups of distilled water was heated in a saucepan. As soon as the water began to boil, the dried flowers of santan was added, and boiled for ten minutes in low temperature. Afterwards, they allowed the petals to steep for another ten minutes. The mixture was poured from the pan to a pitcher using a strainer in order to separate the flower sediment from the extract. Afterwards, the extract was tasted and was compared to a commercial juice drink.

Then, the researchers stirred in a teaspoonful of sugar and a teaspoon of calamansi juice in a glass of santan extract. Finally, the researchers added ice and let the mixture chill completely. They again compared the taste of the prepared santan beverage from a commercially produced beverage. The methods that the researches used are found at www.congocookbook.com. and at www.yummly.com/recipe/Hibiscus-Tea. The researchers repeated the procedure using fresh santan petals. They compared the juices that were made and recorded their observations. They also requested other people outside their group to tell the difference between the two beverages and compare it to commercially produced juices. 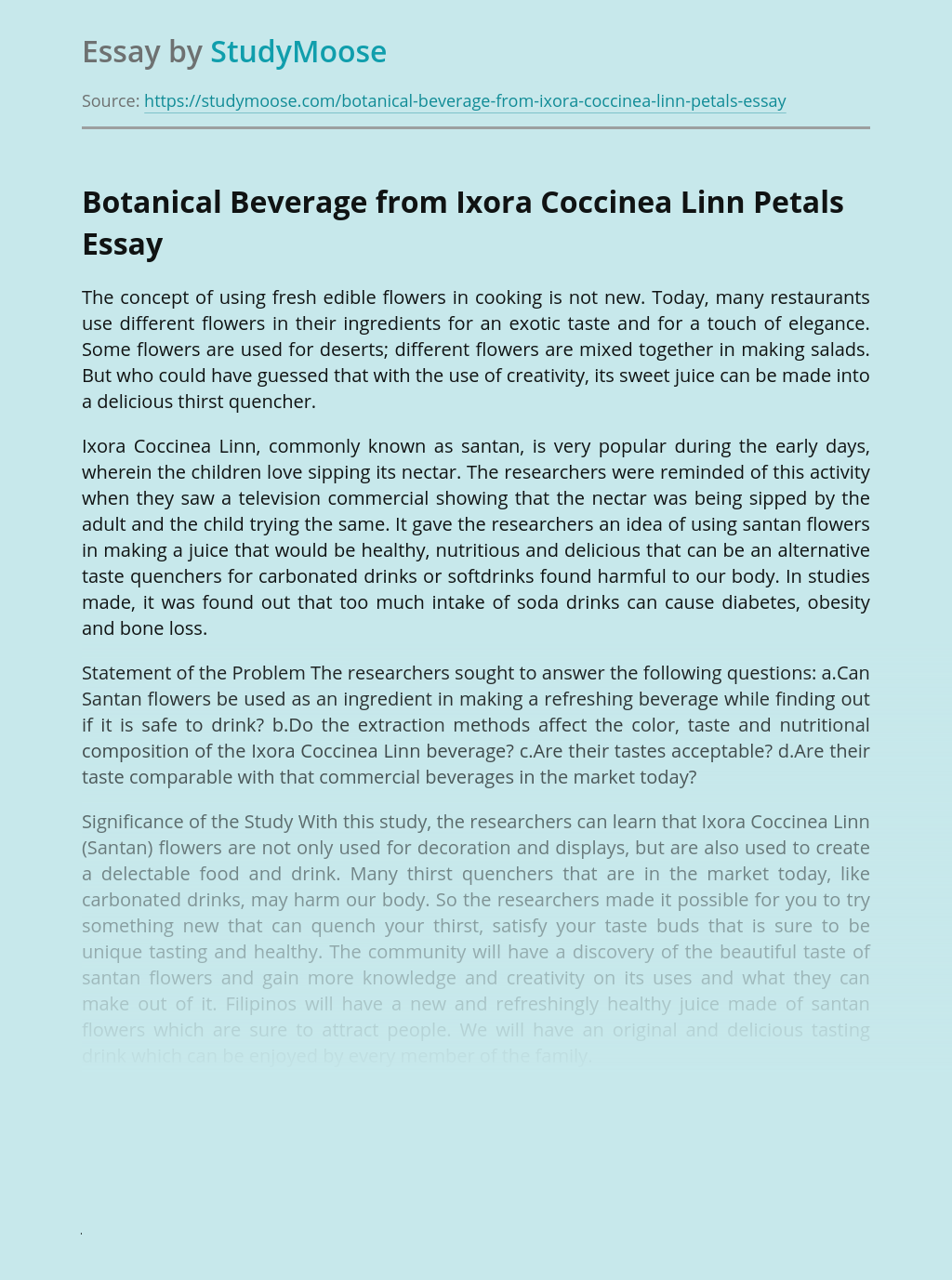 Rate this post Despite the fact that water is something that has no taste, we still love it! Who doesn’t relish the feeling of a cool drink of water on a sweltering hot day? Approximately 70% of our body’s mass is made of water and according to a number of doctors, drinking a total of eight...

A Cup of Hot Tea

Rate this post A cup Of Hot tea Tea is a kind of drink. We get It from leaves. Now-a-days it Is popular drink in the world. where grows: Tea grows well in the hilly places where rain water can not stand at all. It grows in Bangladesh, India, China and Japan. In Bangladesh it...

Rate this post ‘Coming Home’ by Marjorie Waters is a personal essay which explains the author’s sensations upon returning house after a very long time and how she recovers from her deep sorrow triggered by losing a enjoyed one to death. The author tells how she walks your house, pulling back the curtains, dusting the...

What Is Your Comfort Food and Why?

Rate this post Comfort food. Just the thought of it reminds me of something warm and welcoming- like snuggling up by the fire on a crisp fall day. What is comfort food? It is usually the food we have good memories about and that reminds us of a simpler time. Whether you grow up in...

Rate this post Baking brownies seems easy enough, but have you ever followed every step on the back of the box and weren’t happy with the outcome? I think we all have done that a number of times. If you want to know how to create the most amazing mouth-watering brownies keep reading. You and...

How to Make Homemade Pizza

Rate this post Dough: 1? cup of luke warm water 1 tsp yeast 1 tsp sugar 2? cups of flour 2 tsp salt (This will make 2 pizzas, we refrigerator one for approximately a week so we can have pizza any time) Pizza Sauce: 1 tsp salt 1 tsp ground pepper 3 gloves of garlic...

Rate this post Dogs are probably the most common and numerous pet in World, and Mexico is not the exception for this rule. The purpose of this work is to analyze the characteristics of the demand for the dog food business in Mexico. This business has shown a CAGR of 3% during the last six...

Water is the one thing we all drink

Rate this post It’s something we all need to keep us hydrated, alive, and well. But, with water as a mixture with tea and coffee, it makes a wonderful stimulant. Coffee and tea are very popular all around the globe since everyone needs to start their day off right with just a little boost. Tea...