The Play of Daniel Keyes’ Flowers for Algernon

The story, “Flowers for Algernon”, is one that has been written using the first person narration and makes use of progress reports hence making the reader to be part of the story an understand the story as it happens through each of the reports used (Rogers, and Daniel, 5-15).

Proficient in: Flowers For Algernon

The first person technique is important in that it allows all the changes that are seen to take place in Charlie, who is the main character of the story, to be clearly visible both at an external and internal level.

Don't use plagiarized sources. Get your custom essay on
“ The Play of Daniel Keyes’ Flowers for Algernon ”
Get custom paper
NEW! smart matching with writer

It is to be noted that Charlie Gordon is the center of the whole story whereby he is the main character that is subjected to a scientific experiment that is aimed at increasing his intelligence level. In addition to that, Charlie is also the author to the narratives provided through the progress reports.

The reader of this story is able to get a view of life throu8gh the eyes of Charlie who is the main narrator and character in the story ((Rogers, and Daniel, 5-15). The reader is able to understand and follow the progress and development of Charlie through the spellings and the evolution of Charlie’s syntax. The operation that Charlie undergoes fails to work and proves to be detrimental because Charlie gets to find out that his “friends” are not actually true friends. Furthermore, Charlie becomes arrogant and cannot relate to people after the experiment and his is not able to impress his family which is his true motivation.

Charlie undergoes an intelligence operation which transforms him to become more intelligent than he was before. He ends up getting a job at the bakery with the help of his uncle, Uncle Herman (Coules, Daniel, and Robert, 87). Charlie meets Gimpy, Frank Reilly and Joe Carp, people that he considers to be his friends at the bakery and ones he could rely on. However, as it turns out, these are not his true friends. Gimpy, Frank Reilly and Joe Carp result to making fun of Charlie and resent him for being more intelligent after the operation when he goes back to work with them. The three make fun of Charlie and eventually gets him fired because they never liked him despite the fact that the boss, Mr. Donner, believed in Charlie.

At this point, Charlie gets to know that the people that he considered to be his “friends” were actually not his true friends based on their actions towards him. However the attitude of the three changes towards Charlie as the story comes to an end and Charlie’s intellectual ability starts to recede drastically. One thing that the reader gets to learn from the actions of Charlie’s “friends” is that not everyone in your life is your true friend. There are others who may not have good intentions yet they claim to be your friends hence the need to be cautious with people that say they are your friends.

Another issue that is portrayed in the story is that Charlie becomes an arrogant person and is not able to relate with people hence showing that the experiment was detrimental. The lack of proper relationship with other people and Charlie shows that the experiment turned out to be quite detrimental to the life of Charlie (Coules, Daniel, and Robert, 87). It can be observed that after the experiment, Charlie starts to lose his intelligence and he starts to spend less time with his girlfriend Fay. However, it reaches a point whereby Charlie wants to get back with Fay but she cannot accept due to Charlie’s condition which makes her afraid of him. This results in the collapse of their relationship.

Furthermore, the experiment affected how Charlie relates with his family which is seen when he chases his sister out of his room and does not want to talk to her. The issue that one gets to learn from this is that not all experiments have positive impacts in the lives of human beings and it is important that people should accept who they are instead of trying to change themselves.

Charlie undergoes through a rough time especially when his acquired intelligence starts to recede causing him to become alienated from people and instead spends time alone. From the experiences that Charlie goes through in this story tells the reader that life is full of challenges and that there are appreciating what one has is of great importance than to seek for something that will only result in to misery.

The Play of Daniel Keyes’ Flowers for Algernon. (2015, Nov 09). Retrieved from http://studymoose.com/flowers-for-algernon-essay 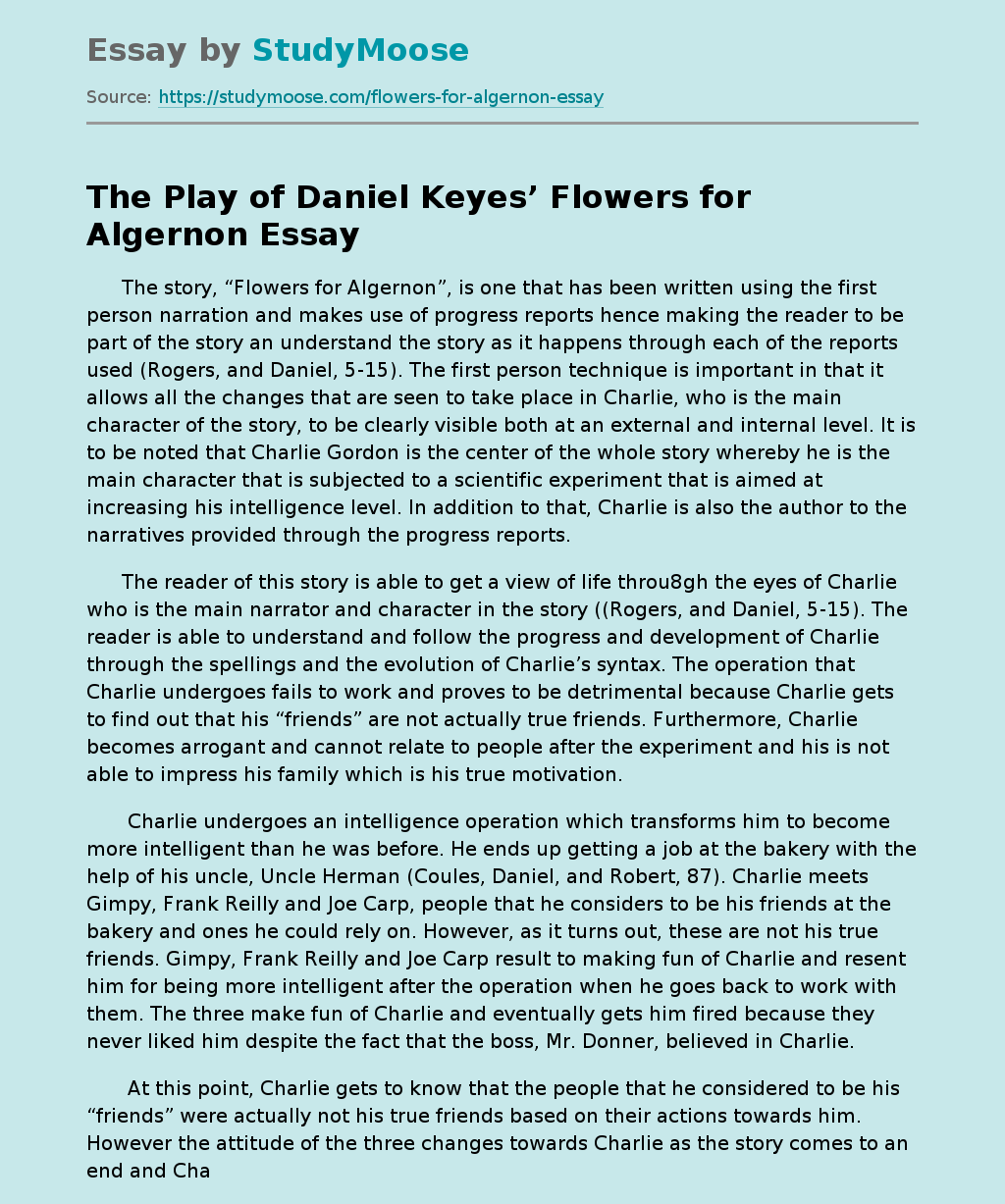