Poverty in Article The Rich Are Different

In the article “The Rich Are Different from You and Me,” author Chrystia Freeland explains the rising phenomenon of income inequality that is occurring between the richest top 10% and bottom 90% of the population. Chrystia Freeland states “In every society, some people are richer than others, but across time and geography, the gap between the rich and the rest has widely varied. The reality today is that the rich-especially the very, very rich- are vaulting ahead of everyone else”. Between the years of 2002 and 2007, income statistics show that the gap between the richest 10% and the bottom 90% of the population had significantly increased.

Don't use plagiarized sources. Get your custom essay on
“ Poverty in Article The Rich Are Different ”
Get custom paper
NEW! smart matching with writer

Statistics also show that by 2007, approximately 35% of the wealth was maintained by the top 10%, leaving about 27% of wealth to the bottom 90% of the population.

This is about an 8% gap in between. The last time income inequality was this high was in the 1920’s, but back then only 20% of wealth was gained from work. Today the top 10% gains at least 60% of their wealth from work, rather than inheritance.

As economies throughout the world mature, income inequality will continue to rise. The gap between the rich and all others is primarily found in United States. Other countries such as Canada, China, and the United Kingdom are beginning to see income inequality as well.

Freeland also states that “These global super rich work and play together”. They share common interests such as business traveling, and vacationing around the world. Due to the common interests shared by others most like themselves, they have become separated from all others within the population, and have formed their own world governed by plutocracy.

Author Chrystia Freeland is concerned that because the rich are so caught up in their world of wealth that they will not recognize that other members of the population are falling behind, and the severity of the rising income inequality throughout the world.

Freeland, Chrystia. “The Rich Are Different from You and Me.” The McGraw- Hill Reader: Issues across the Disciplines. Ed. Gilbert H. Muller. New York, 2014. 51-52. Print.

Poverty in Article The Rich Are Different. (2016, Sep 22). Retrieved from https://studymoose.com/poverty-in-article-the-rich-are-different-essay 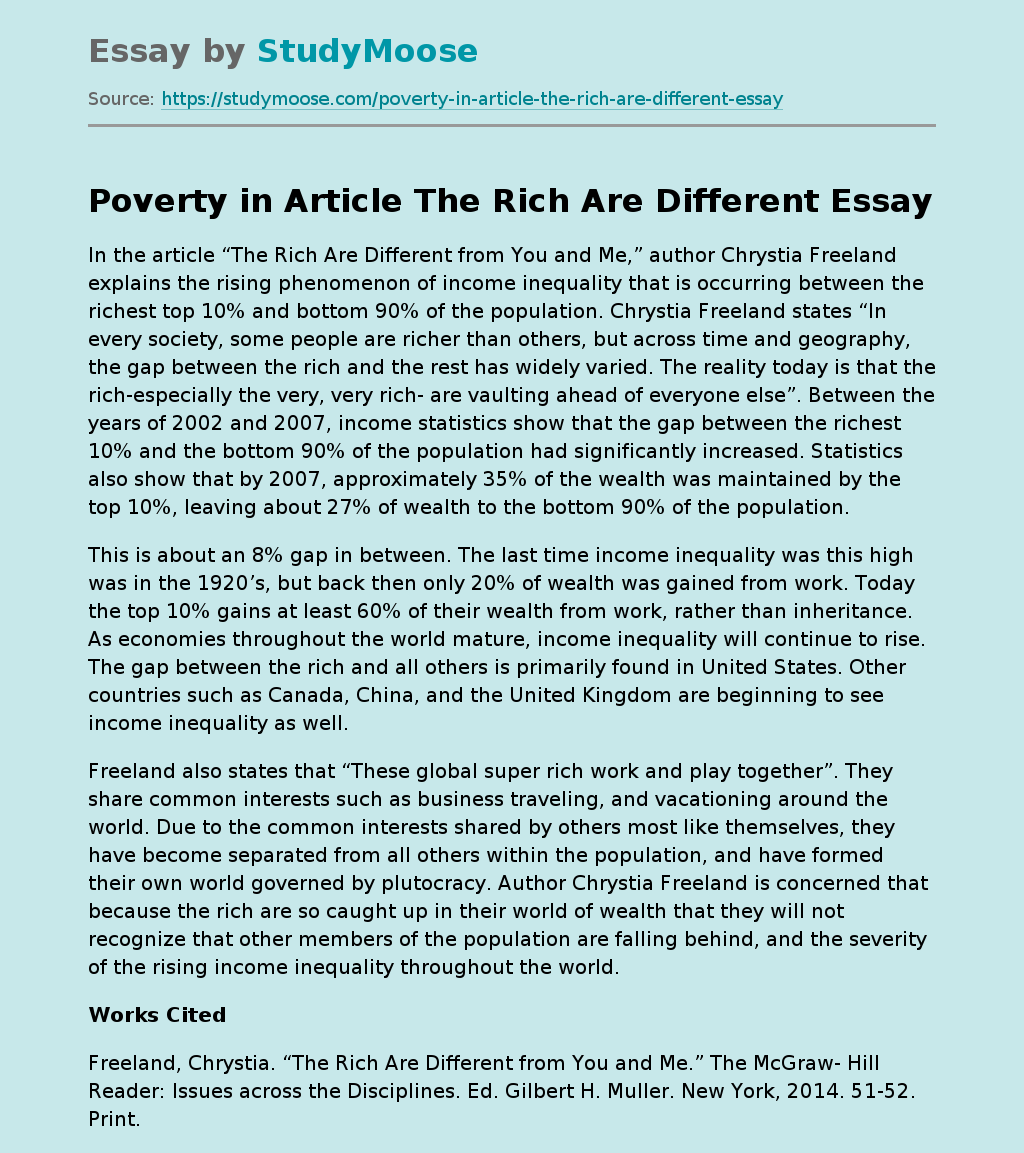