I am writing in support of Janet Lerner’s application for an NSF Fellowship. Janet is genuinely a gifted student with great potential as a research scientist. I encourage you to give her your most careful consideration.

Janet has been conducting an independent honor’s research project in my laboratory for the past year. Without a doubt, Janet is one of those rare individuals that comes along only once every few years; she is highly intelligent (her transcript is blemished by a single “B”), inquisitive, motivated, and creative.

Turn in your highest-quality paper
Get a qualified writer to help you with
“ Postdoc recommendation letter ”
Get high-quality paper
NEW! AI matching with writer

Janet has just the right combination of assertiveness and respect to make her a joy to work with in the lab. She takes directions very well, but she is not timid about questioning experimental details or rationale. This is a student that I will enjoy watching develop into a highly productive research scientist.

For her honor’s thesis I have given Janet a demanding project that I would normally reserve for my graduate students.

Even before entering my lab, she had read a large number of articles that described recent advances with the virus that we study in the lab—JC virus (JCV). Expecting that I would need to explain many of the techniques used in these studies and to discuss the rationale behind the experiments, I was surprised to discover that she already had a firm grasp of these concepts and was ready to discuss the science on a much higher level. Together we decided that her project would entail a mutational analysis of a specific functional domain of the major regulatory protein of JCV, the multifunctional T protein.

To emphasize the scope and importance of Janet’s work, a summary of the relevant science follows. JCV is an important opportunistic pathogen; it has infected >70% of the world’s population and it remains latent in the kidneys and brains of most of us. In severely immunocompromised individuals, JCV may cause the fatal demyelinating brain disease progressive multifocal leukoencephalopathy (PML); PML is now the cause of death in up to 7% of AIDS patients. An important question related to the pathogenesis of PML revolves around the mechanisms of latency and reactivation of JCV in the body. Many of our earlier studies have pointed to the T protein as a major player in these phenomena. We now believe that this protein contributes to the restricted host specificity and inefficient DNA replicating activity of the virus.

Based upon work with the related monkey virus SV40, we have lately begun to focus our attention on a zinc finger domain of the JCV T protein. This domain is thought to play a role in forming a double hexameric structure of T that facilitates appropriate interaction with viral DNA sequences at the replication origin. We believe that differences in the consensus sequence of the JCV T protein zinc finger affects its ability to efficiently replicate the viral genome and to establish latency. Letter to Recommend Janet Lerner —2

To investigate this possibility, Janet is using a modified Kunkel method of site-specific mutagenesis to convert the JCV T protein to an SV40-like protein within the finger region. Once constructed, these mutants will be tested in cell culture for viability, promotion of DNA replication, and oligomerization. Janet has made excellent progress on her project. She has subcloned the appropriate fragment of JCV DNA into a phagemid, verified its structure, and successfully completed the mutagenesis reactions using control reagents.

During the latter set of experiments, a number of difficulties were encountered. Janet demonstrated impressive resourcefulness in overcoming these problems. She did not simply run to me for answers, but instead called a technical representative at the company from which the reagents for the mutagenesis reactions were obtained. She also went to a graduate student in the lab for further information. By the time she came to me to explain the problems, she was also ready to proffer solutions. Furthermore, Janet suggested additional controls to ensure that her ideas were viable. Although I offered some alternative approaches, Janet was able to convince me that her approach was better. She now has the mutagenesis procedure working smoothly, and she has attempted to produce her first mutants.

This attempt yielded several potential mutants, but unfortunately sequence analysis (she got the dideoxy method to work beautifully the first time) indicated that they represented wild type clones. Undaunted, she has gone back to the bench, modified the annealing conditions for the mutagenic primer and template and is trying again. Her perseverance and mature attitude in the face of a scientific set-back are unusual for such a young researcher. I have no doubt that Janet will have a considerable influence upon our research program and that her efforts will result in the first authorship on an important manuscript.

It should be apparent that I think very highly of Janet Lerner’s academic and research skills. I am not alone in this evaluation. She has fit in very well with my research group (10 people including research assistant, postdoc, and graduate and undergraduate students). The other undergraduates look up to her as a leader, and the graduate students and postdoc interact with her as an equal. In closing, I don’t believe that you could find a more qualified candidate for an NSF Fellowship than Janet Lerner. She has my strongest recommendation. 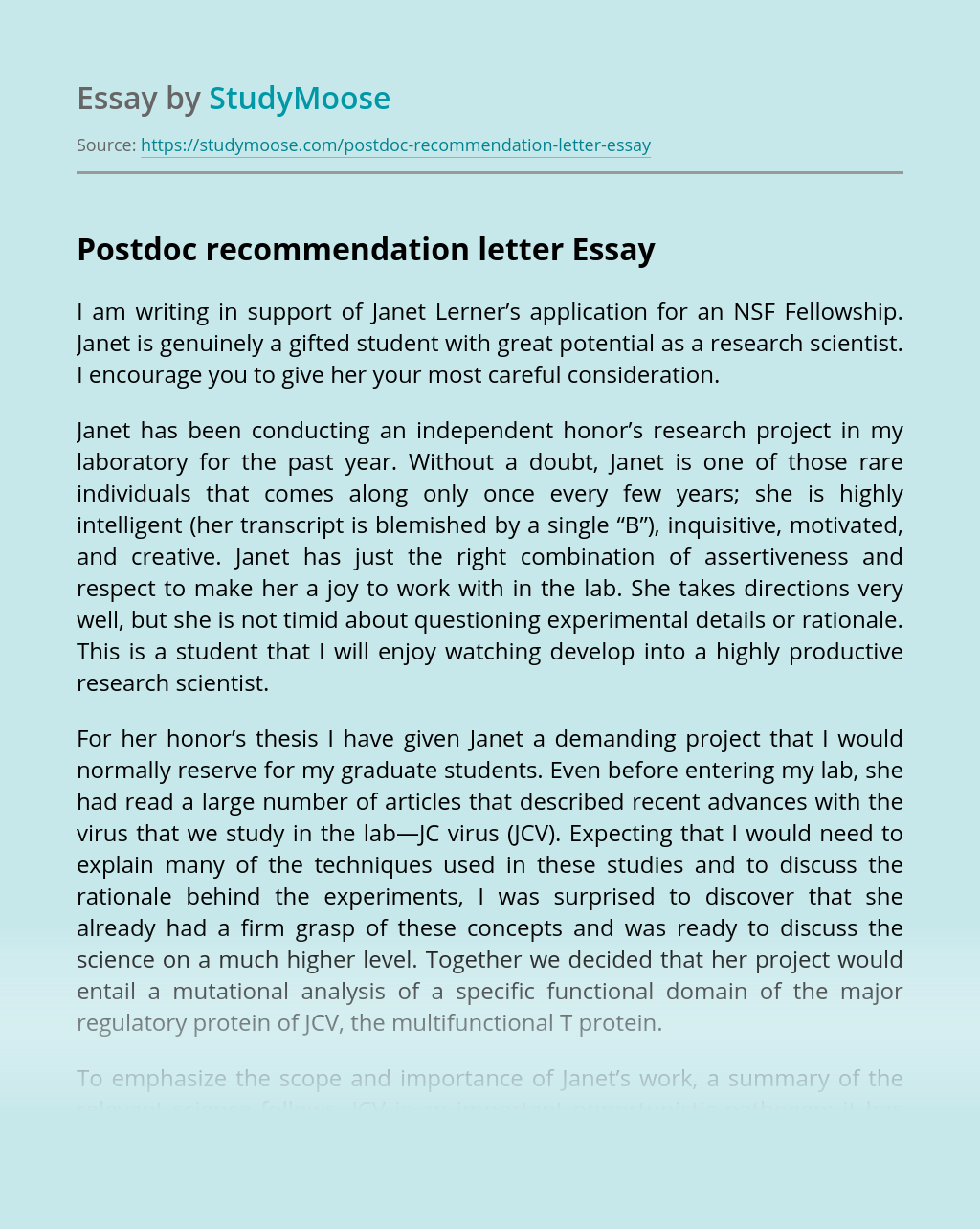 Turn in your highest-quality paper
Get a qualified writer to help you with
“ Postdoc recommendation letter ”
Get high-quality paper
Helping students since 2015
Stay Safe, Stay Original