Over the last century, the population of Mexico City has been increasing rapidly. The population has almost double in size every ten years in the last few decades. There are about ten thousand people per square kilometre and there are over three million registered vehicles in Mexico City.

Don't use plagiarized sources. Get your custom essay on
“ Population Growth in Mexico City ”
Get custom paper
NEW! smart matching with writer

1. Reasons for this growth.

Pull factors from the rural areas include:

– Few schools therefore minimizing the education for the youth

– Few roads therefore resulting in more difficult to have transportations

– Land is not being fertiled properly and being overused, the land that would have been fertile if used properly is now wasted

Pull factors from Mexico City include

o All kinds of entertainment including dances, cinemas, theatres and other major social events

Many poor citizens in the rural areas know that the conditions in Mexico City will not be the perfect place, but they know that it would be better off than where they came from or at least willing to take the chance that the city will be better.

The technological and medical advances in the city also attracted many people, and since death rates have significantly dropped within the last couple of decades, the populations shot up because birth rates were still going up until around 1960.

There are many different results from the vast amount of immigration into Mexico City. One of the most important results is the pollution and the effort it has to the environment. The physical landscape of Mexico City limits pollutants released everyday within the city. Cold air flowing down from the mountains pushes and traps the pollution into a bowl shaped area formed by mountain ridges around the city. Although the elevation of the city is averaged at 2240m above sea level, the two mountains surrounding the Mexico City exceed 5000m in height. When combined with the forty-five thousand factories the city has, the air is so poisonous that 98% of the people suffer from inflammation of the nasal passage. Seventeen thousand tons of pollution is produced everyday. The amount of smoke when breathing the air in Mexico City in one day is equivalent to smoking sixty cigarettes. The leaded fuel is giving Mexico City citizens high lead blood level.

The cost of living in Mexico is around the cost of living in the U.S. On the other hand, even with the parent working sixteen hours a day, the income for the family is nowhere near what is needed. Children are forced to work because there is not enough income in the family to support everyone. By leaving their education to go to work, the children will lose their future. Often, the female will get pregnant as young as fourteen and fifteen and then their children will go through the same process; it has turned into a cycle.

Forty percent of the cities’ population are migrants. As poorer people migrant into the city, and the rich and the higher-class get wealthier, the gap increases and the elite must have security to keep the beggars and thieves out. The unemployed often goes to the rich to try to beg for some money.

Unless the new migrants are lucky and have a place to live in, most of the new migrants do not have a place to live in, they will build more houses to start new housing for themselves. In doing so, the size and shape of Mexico City increases more and more, making transportation harder and also creating more pollution. Also, in this case, many houses and building are not properly made and residents lack safe drinking water, underground sewers, or utilities. Sixty percent of the population is living in illegal settlement areas.

Resources of Mexico City is only diminishing, it is not increasing. Therefore, with the massive amount of immigrants, more are more resources are needed, but there isn’t any. Everyone in Mexico City now have to share the resources meaning that everyone that is poor will get a lesser amount to eat.

Also, of the 11000 tonnes of garbage is produced everyday, only 75% gets picked up and properly disposed of.

3. Efforts to address the problems/issues and an evaluation of these efforts.

There are a number of ways already suggested and being used to help Mexico City become a better environment. For the natural environment, the government has placed a law for the family owned cars to be driven for three days and then stop for one. In this case, the richer families bought more cars so they can drive it any day of the week. By doing this, those families create an even worst environment because of the cars that need to be built and manufactured. Another approach to a cleaner environment is to have new buses that are cleaner and more efficient. In recent years, the government is making stricter rules to reinforce the importance of the problems of the pollution.

New skills can be taught to the unemployed so that they can create work for themselves by making useful objects and helping others. 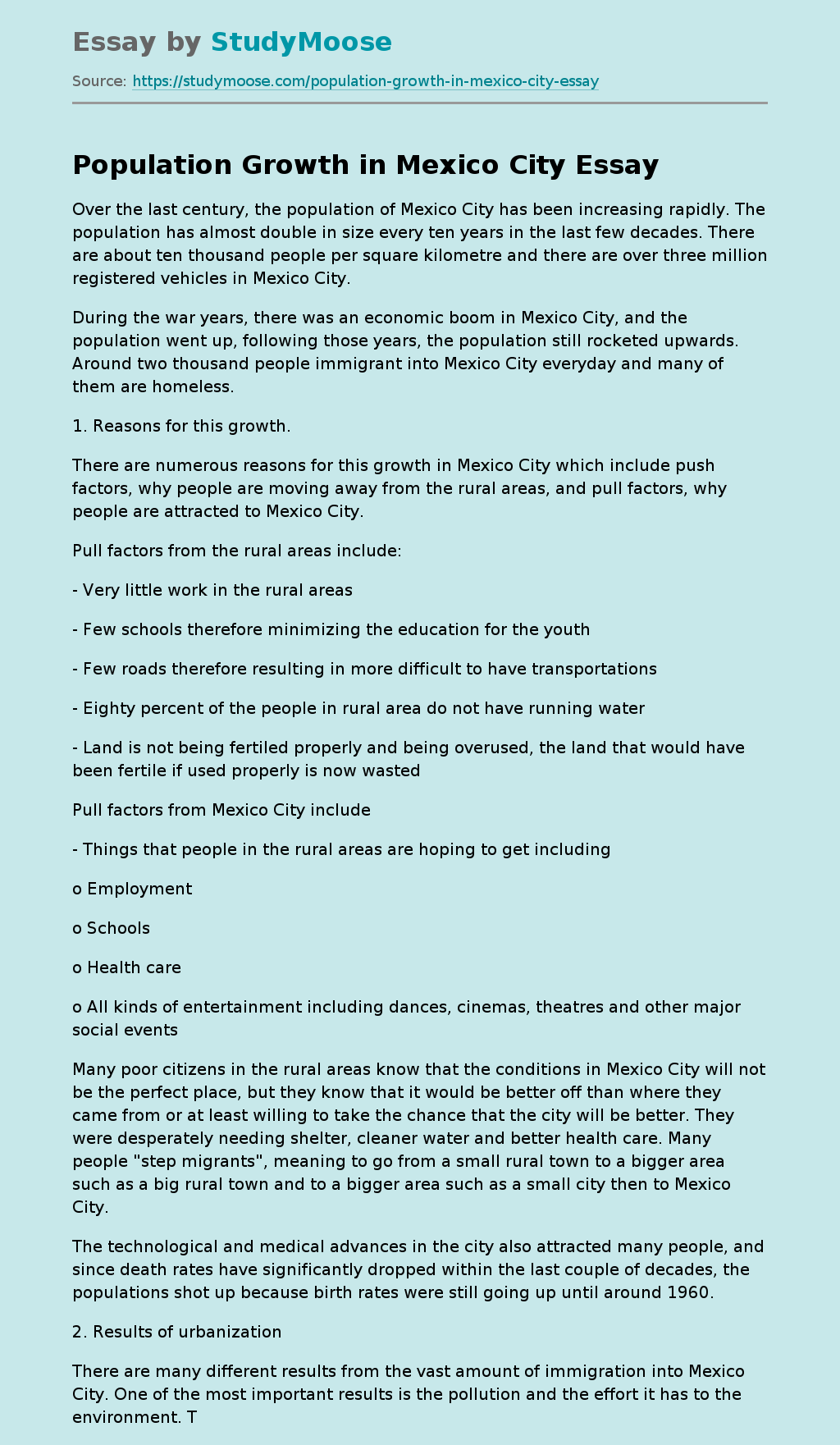