World War II was a time of great social turmoil in the United States, not only because of its active role in the war, but also because of the radical changes taking place in society. As an effect of the Jim Crow laws, people were beginning to speak up against segregation and demand equal rights. During this time, many activists and political reformists used different forms of social media in order to present their ideas regarding racism.

Don't use plagiarized sources.
Get Your Custom Essay on Political Cartoon Analysis Just from $13,9/Page

In 1942, Dr. Seuss published this political cartoon in the New York PM newspaper as a way to address the issue of racial discrimination by urging change in the war industry. Because the war industry did not value the use of black labor in the war effort, the main idea presented in this cartoon is that both white and black labor are required to achieve real peace and equality in society. Seuss uses symbolism, his characters, and text in order to effectively portray his message to his audience, the people of the United States.

Seuss uses Uncle Sam and the satirical character “War Industry” in order to represent the two conflicting viewpoints on the issue of racism.

While Uncle Sam represents the democratic American ideals of equality, “War Industry” symbolizes the group of people, companies, and racial mindsets that support racial segregation. In this cartoon, Uncle Sam represents the goal of the American labor force: to incorporate the use of all men, regardless of race, in order to fight for the nation. However, the War Industry representative symbolizes a more prejudiced, racist mindset. His top hat and cigar reveal that he is of a wealthy class, which separates him from the common laborers and working class. He is seen to be playing only the white keys on the piano, which demonstrates the use of only white labor in the war efforts. His short hands represent his reluctance to incorporate black labor into the industry because of bigotry and racial stereotypes.

Although Uncle Sam is not violent or imposing in this cartoon, his expression reflects sternness and forcefulness, showing his urgency to incorporate black labor into the war industry with a non-violent, practical approach. In addition to the use of his characters, Seuss uses text in order to convince his audience of his ideals regarding racism in the war efforts. The quote near the top of the cartoon states that “real harmony” can only be achieved by using both white and black labor in the war efforts. Not only does Uncle Sam advocate for equality, but he also wants to see the success of the war industry. He uses this appeal in order to address the desires of the wealthy class. By using the word “harmony”, he means both racial equality in society, as well as improvements in the war industry. The white keys on the piano are labelled “White Labor” which far outnumber the black keys.

This represents the idea that black labor is seldom used in the war industry. Seuss wants to show his audience that, using both black and white labor force will improve the condition of society. Lastly, Seuss’s use of symbolism further demonstrates his message of racial equality in the war effort. The piano itself is a symbol for the distribution of work in the labor force amongst whites and blacks. In addition, the cobwebs on the black keys symbolize the rare use, or no use at all, of black labor during World War II.

In addition, there is a uneven distribution of smoke coming out of the pipes of the piano. This shows that the instrument, or labor force, is not being used to its full extent. While some parts of the piano are stressed, others are seldom used and are neglected. This applies to the labor force in America. By not allowing blacks to work in the war industry, the full potential of America’s working class is not being used. In conclusion, Dr. Suess’s political cartoon addresses the issues of racial segregation within the American society. This political cartoon was widely controversial in its time because of its political stance and radical ideas that oppose the Jim Crow laws and the upper class of society. Although this cartoon did not directly cause a dramatic change in society, it advocated for a very important idea in American history, the issue of equality of all people. 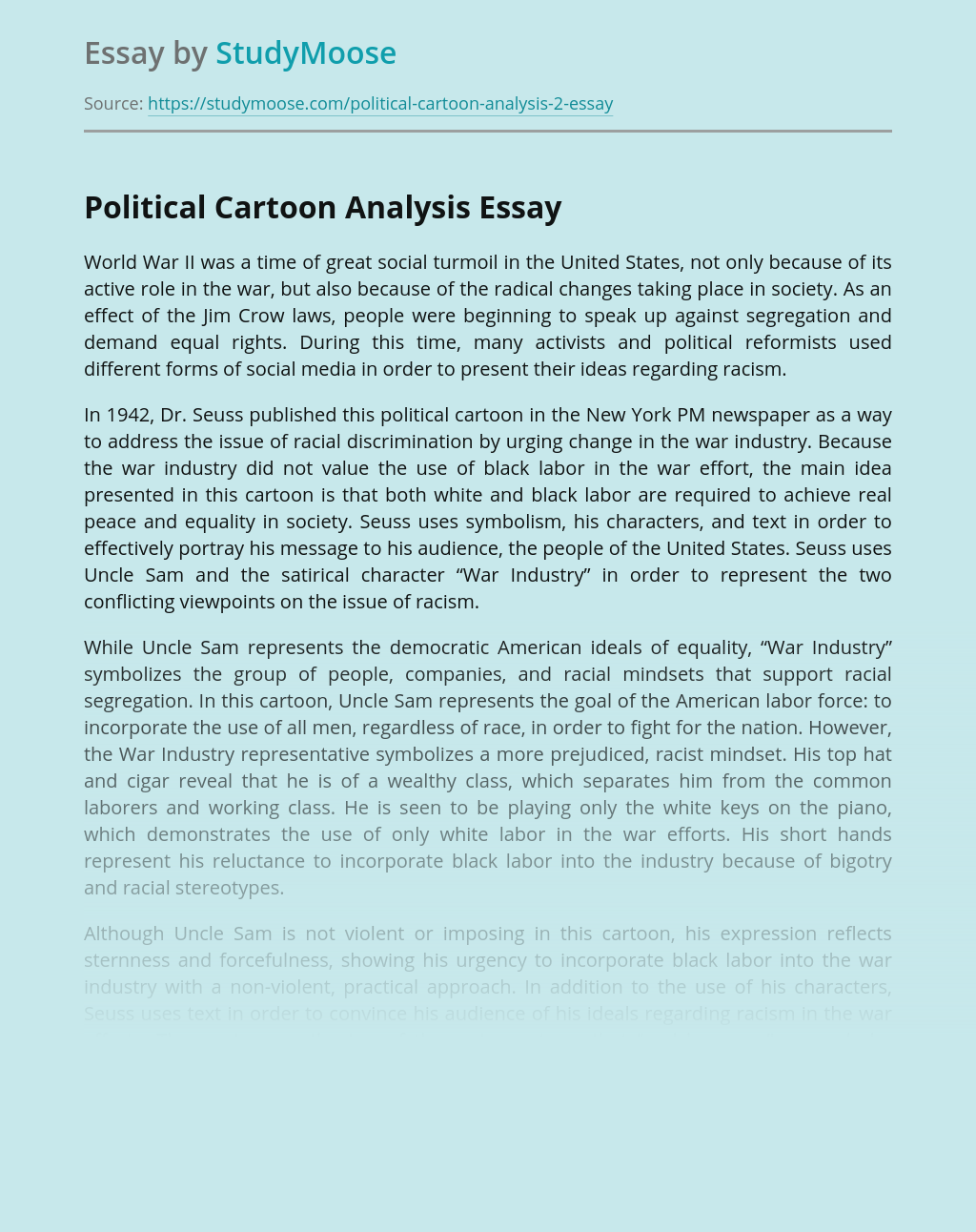 Message vs. Style in Things Fall Apart, by Chinua Achebe

Rate this post “The message is more important than the style”. I totally disagree with this statement in the context of Things Fall Apart as I believe that in this particular work, the message is of equivalent importance to the style; to have a particular writing style whose sole purpose is found in informing readers...

Rate this post BUS 237– Assignment 1: MIS Short Article Critique Due Date/Time: Inspect Canvas Assignments for the due date/time for your section! Objective and Background: Many of the principles you will be finding out throughout this course are best comprehended in addition to more intriguing if you understand current and emerging MIS-related news in...

"Explain the concept of homeostasis with reference to the control of heart rate, breathing rate, body temperature and blood glucose levels"

Rate this post Homeostasis is where the body keeps a constant internal environment. This involves all the metabolic processes taking place In the body as well as the blood, tissue fluid and all the contents in the body’s cells. There are a range of variables from heart rate to the blood glucose levels that the...