There is a saying that goes like this-‘Be kind to unkind people – they need it the most’. I for one believed it to be utter nonsense.for me it was ‘one for one’s self’. Ever since is remember i was passed from one foster home to another,never really belonging anywhere…nothing was black or white in my life. every thing was decorated in different shades of grey. As soon as I was old enough I packed everything and rushed out to face the world on my own.

Don't use plagiarized sources. Get your custom essay on
“ Repaying Kindness ”
Get custom paper
NEW! smart matching with writer

but something good came out from my earlier misery. The little ten year old I’m proud to call my sister. For me she was everthing.

All the work I did,all the trouble I went through was for her. Never taking help from others because I alone wanted to be everything she needed. But when she got diagnosed with cancer ,I knew I would not be enough.but I was still too proud to cry out for help.

I’ve already learned that crying out for help goes unanswered. But by some miracle ,this time a kindness from god ,without me even asking ,was granted in the form of a man; my employee.

Mr. Ilhum ,my employer was a jolly fat man with a beer belly. Although he was almost fifty,his only child was an eight year old boy. His wife died at childbirth.it was really a sad case .from what I heard,they had been trying for a child for over 8 years.

one week after Susane , my sister was diagnosed, he quite accidently found out the doctor’s report . to say he was shocked would be quite an inderstatement.from then on he took over and had susane admitted .money was of no concern to him.

When I once asked why he was doing it he said,every one deservers to live their life .according to him he wasn’t doing as any us favours but he was doing something any m,an would do. Yeah right. I am pretty sure there is no one else as crazy as him.

Still I wasn’t about to question his sanity,after all , he was saving my sister. Due to susane’s cancer being caught at an early stage, the treatments were able to make her better and in no time,he was back to her old life. Every thing was fine again,but at the back of my mind,the question always remained; how do I ever repay such a kindness?After about a month or so the answer soon came to me when I saw the fire dancing around his house.

I was working in the outside garage when I heard shouts .but was got to me the most was the cry of a child. It was filled wit such terror that it send shivers down my spine.forgetting all about my work I rushed towards the house, I was consumed with horror. What a sight! The two storey white house was no longer a happy picture,but a flaming ball of fire. What was worse was that all the people standing around and trying to put off the fire could see the little boy crying hysterically from the second window,but no one went to help him.

Forget about repaying any kindness,all that was going throughmy mind was his crying face. After that everything was hazy due to the huge amount of adreline rushing throught me.but I do remember seeing the relief on the child’s face when I scooped him in my arms. As soon as I got out, the firemen rushed at me wit wet blankets and put me in a stretcher. Mr.Ilhum was standing next to my,with his hands on another stretcher ,tears running freely from his eyes. It was then that I registered that the little boy was his. As the morphine started working it was hard to stay awake,but I do remember the words “ that was one heck of a way to repay a kindness,now I owe you one.” 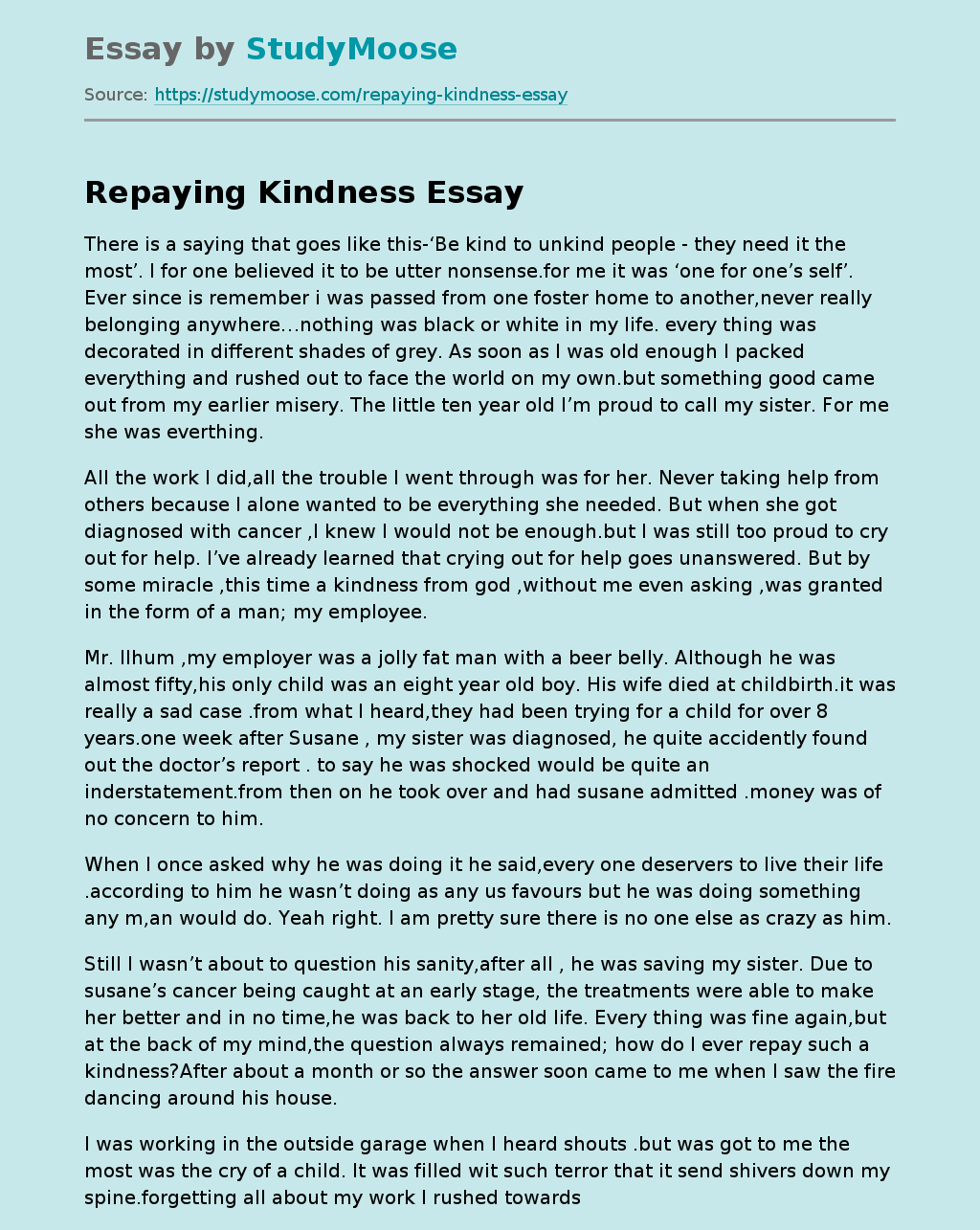