I will be writing my research paper on police subculture and how the affects of police subculture impact the body of the law and how it relates to crime. Police subculture is an array of standard procedures and values that rule law enforcers activates in relation to their contractual responsibilities. Police officers were ranked the fifth most stressful job in the world. Since police work is very stressful, police officers have to deal with many hostile individuals in the public and therefore they need to defined styles to handle these unique scenarios.

Turn in your highest-quality paper
Get a qualified writer to help you with
“ Police Subculture ”
Get high-quality paper
NEW! AI matching with writers

Police officers are people the society normally looks up to as epitomes of discipline and protectors of law and order; however police behavior in recent years has been anything but flawless with that being said there is a rise in the resentment and distrust in the public.

The public no longer trusts or respects police officers imposing all sorts of changes against them. Police behavior is indeed hateful in some cases especially where minorities or women are concerned.

When we dig deeper into the anthropological and psychological cause of this kind of behavior, we notice that police are influenced by a flawed subculture that profound affects the attitude and behavior of most police officers.

With that being said this subculture teaches them certain values and beliefs and on the other, it turns the entire police community into a cohesive group meaning causing cohesion that is essentially alienated from the general public. According to Adler, Mueller, and Laufer (1994) police subculture is a “set of norms and values that govern police behavior, brought about by stressful working conditions plus daily interaction with an often hostile public.”

Police subculture is responsible for giving offers a unique working attitude and mindset. Their character and personality is profoundly altered by the vies and values that they learn from existing in this subculture. The one most important thing we notice about this subculture is the idea of insiders and outsiders that lies at the core of all its values. Police officers are constantly reminded of their role as protectors of peace and order which turns them against the general public as they view everyone outside the police department as a potential criminal or suspect. Police subculture is also essentially characterized by violence as researched indicates that, “Many officers are exposed to a subculture of violence in which they encounter death almost daily. The average citizen generally does not witness in a lifetime the amount of death and violence a police officer experiences in one month.” (violanti,1995)

Dr. James Fyfe, a very well known figure in the world of law education and law enforcement indentified some key issues regarding police sudbulture during a police conference in April 1992. He believed that “ characteristics of the police subculture may be responsible for some of the apparent increase in the frequency of police compkaints. He stated that many police officers feel they are soldiers in the war on crime. Fyfe said that this is a war they cannot win, and the realization of this leads to frustration and anger. “(Eric Jackso,1992)

Police officers are severely affected by the values that this subculture promotes and endorses. For instance, police officers are usually alienated from the general society which puts them at a greater risk of being vulnerable to police subculture. This is because they are regularly reminded of the insider/outsider principle meaning giving rise to certain degree of separation from the public. This separation starts expanding with the passage of time until police officers cannot longer relate to the common society this results in deeper association with police subculture, which ultimately shapes their perspective on others. Another reason they cannot relate to the public is because of the accusations that are imposed against them. The public usually treats then with disgust and disrespect, holding them responsible for corruption and plagues police departments and for general lawlessness in the society. Fr this reason, police officers seeks validation from other police personnel, which makes the inner subculture more effective and powerful. (Christopher Cooper,2000)

Violanti(1995) explains: “ The roots of frustration emanate from the central irony of American policing: Society charges police officers with the task of regulation a public that does not want to be regulated. For individual officers, the resulting frustration is exacerbated by a largely unsympathetic press, a lack of community support, and a criminal justice system that values equity over expediency. A sense of societal isolation often ensues, compelling officers to together in a defensive stance.”

While this occupational subculture should have been a source of inspiration, it is actually despised by many including some police officers themselves alter they realize how it damaged their vision and personality. Most police officers are racial biased as recent incidents of police brutality indicate. This is because of women and minorities are seen as weaker groups and when they refused to obey police commands, police officers see it as a direct attack on their authority. This attitude has given rise to some serious cause of police brutality against citizens and one such case was that of Thomas Jones of Philadelphia. Commenting on this case, a former U.S Marine and police officer Christopher Cooper (2000) linked these kind of cases to police subculture saying “Sadly, in our early tenure as cops, we instructed on the “code” of the police subculture. These are norms that are almost always perverse. Two such norms were operable in the Jones mob attack. The first was if a citizen runs from one of us, we are to beat him severely. Another is that if a citizen physically hurts one of use, we are to hurt that citizen even more before we bring him to the station. And if that citizen has killed a cop, he shouldn’t make it to the station alive.”

The marcho-ism that characterizes police culture is also responsible for cases of domestic violence where police officers were charged for hitting their wives and using force to extract obedience. This is indeed a highly disturbing situation, ehich is posing serious threat that happiness of households where one spouse is in the police department. It has been noticed that when many police officers are domestic abusers even though they may not define their behavior in these terms. Apart from women and minorities, gay men also face serious prejudice especially if they join the police force. Kirschman(1997) writes: As with women, gay men are presumed to lack such manlu attributes as courage, bravery, and loyalty. And like women, when they demonstrate courage and competence, they threaten the notion that only “manly” men can do police work. 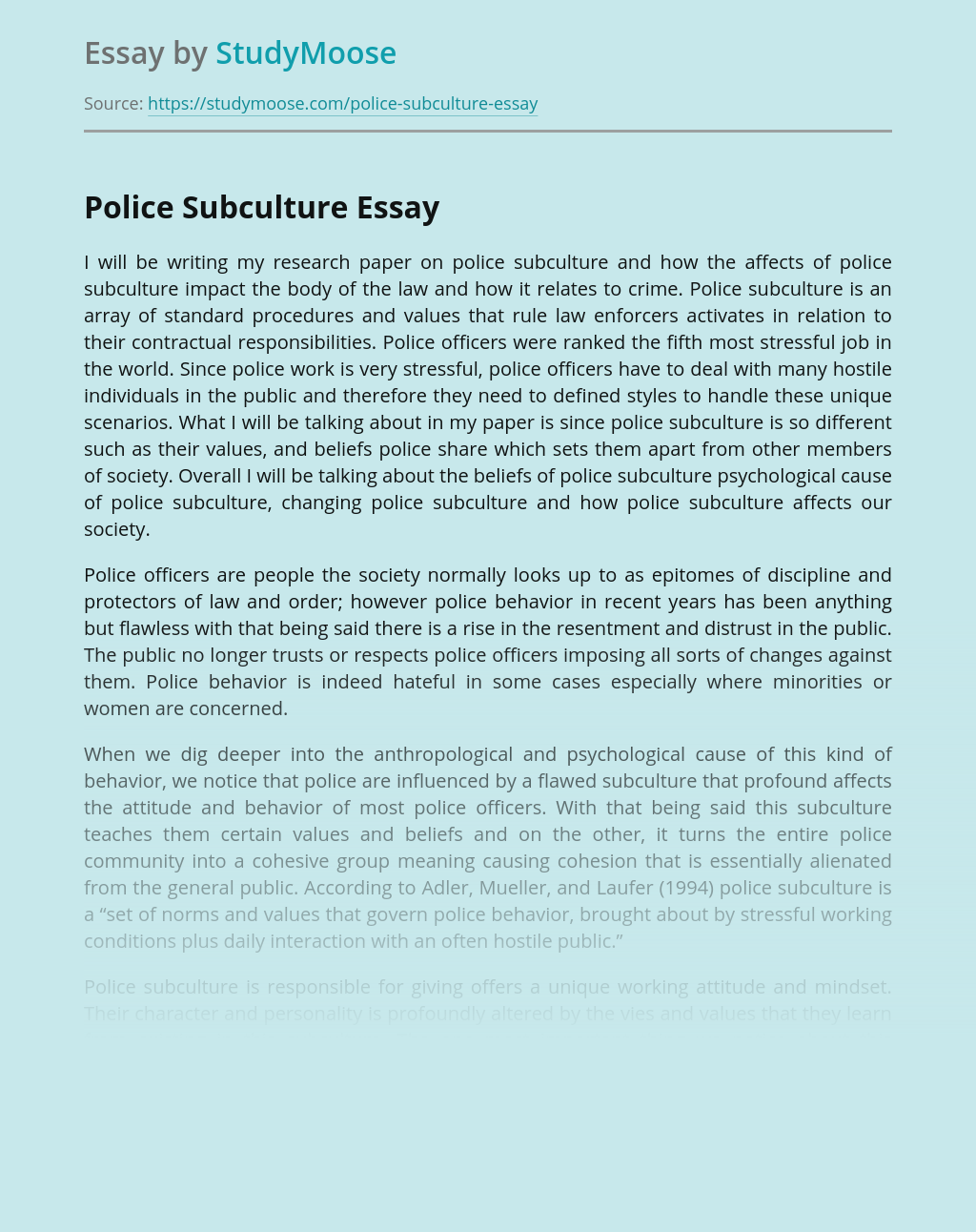 Turn in your highest-quality paper
Get a qualified writer to help you with
“ Police Subculture ”
Get high-quality paper
Helping students since 2015
Stay Safe, Stay Original