The Role and Function of Law in Society

The role and function of law in society today is that persons, whether it is an individual, a worker, or business owner, everyone is subject to and must abide by the laws of this country. A governments’ power is enacted by the laws created by the legislative branches of government, and they oversee the most basic concerns of our civil rights, times of war and peace, including the financial stability of the world. They stipulate peoples’ rights and responsibilities, including the organizations within the jurisdiction of each government.

Don't use plagiarized sources. Get your custom essay on
“ The Role and Function of Law in Society ”
Get custom paper
NEW! smart matching with writer

Laws have been the most important creation of our time because they control the behavior of mankind, influencing our human rights, standards of living, and allow us to determine the quality of our own lives. The creation and execution of our laws is based on various beliefs that mankind and society act in specific ways because of the presence of law enforcement (“Laws Of Government”, 2008.) Cipollone v. Liggett Group, Inc.

As stated in the case from our assigned readings, Cipollone filed suit against Liggett, including other cigarette producers, whom he believed were in violation of various consumer protection laws.

He claimed his mothers’ death was the direct result of these companies misrepresenting their product in the state of New Jersey through the use of fabricated advertising, deceptive information regarding smoking hazards, and collusion to forego medical and scientific information with respect to the dangers of smoking. For these reasons, he believed they were at fault. Liggett argued that two federal laws superseded New Jersey law (Melvin, 2011.

) This case of Cipollone v. Liggett Group, Inc., is an excellent example of how preemption is used. In our Constitution, according to “The Supremacy Clause and Federal Preemption” (n.d.), “Constitution and the laws of the United States…shall be the supreme law of the land…anything in the constitutions or laws of any State to the contrary notwithstanding.”

This means that federal law trumps state law when the federal law is intended to preempt any state law or regulation. In this case the United States Supreme Court ruled that the federal laws preempted state laws because the federal legislation was enacted to protect the tobacco companies from experiencing frivolous law suits every time someone became ill or died as a result of tobacco use. Liggett argued was that consumers have been told for decades that smoking and secondhand smoke is harmful or fatal to his/her health. For this reason, Cipollones’ claim was denied. It seems as though companies are exempt from certain laws, but people do have the right to make good and sometimes bad choices, even when it is harmful to ones’ health. Unfortunately, most companies take little responsibility of informing the public to the dangers of a product, and the public will be the ultimate bearer of bad choices.

The Role and Function in Business

There are a few agencies within the State of California that their purpose is issue some sort of payment to the public. The California State Teachers Retirement System (CalSTRS) has the directive to collect contributions from their members, and at a later date, various benefits are disbursed to members in the form of retirement and disability payments, or beneficiaries upon the members’ death. The rules that oversee the function of this agency are based on laws, rules, and regulations, set forth by the California legislature as far back as 1927. When a member applies to receive a benefit of some type, many factors are considered in the eligibility and determination of benefits to be paid. Adjustments are made to benefit amounts for various reasons and can occur at any time throughout the payment cycle for multiple reasons creating an amount due the recipient or an amount to be collected. Under California Law, collections are established at a percentage of the benefit amount currently being paid. At times, members have filed for protection under the United States Bankruptcy Courts, where the amounts they owe to collectors are forgiven.

The role and functions of law as it pertains to business and society oversees the protection the public, business owners, including the individual states. The complexity of our legal system is a necessary tool for the success of maintaining our society, and when a person chooses to ignore the laws put in place for societys’ safety, there are consequences for those illegal actions. Without the presence of our legal system, no one would ever be safe and chaos eventually would prevail.

The Role and Function of Law in Society. (2016, Mar 16). Retrieved from http://studymoose.com/the-role-and-function-of-law-in-society-essay 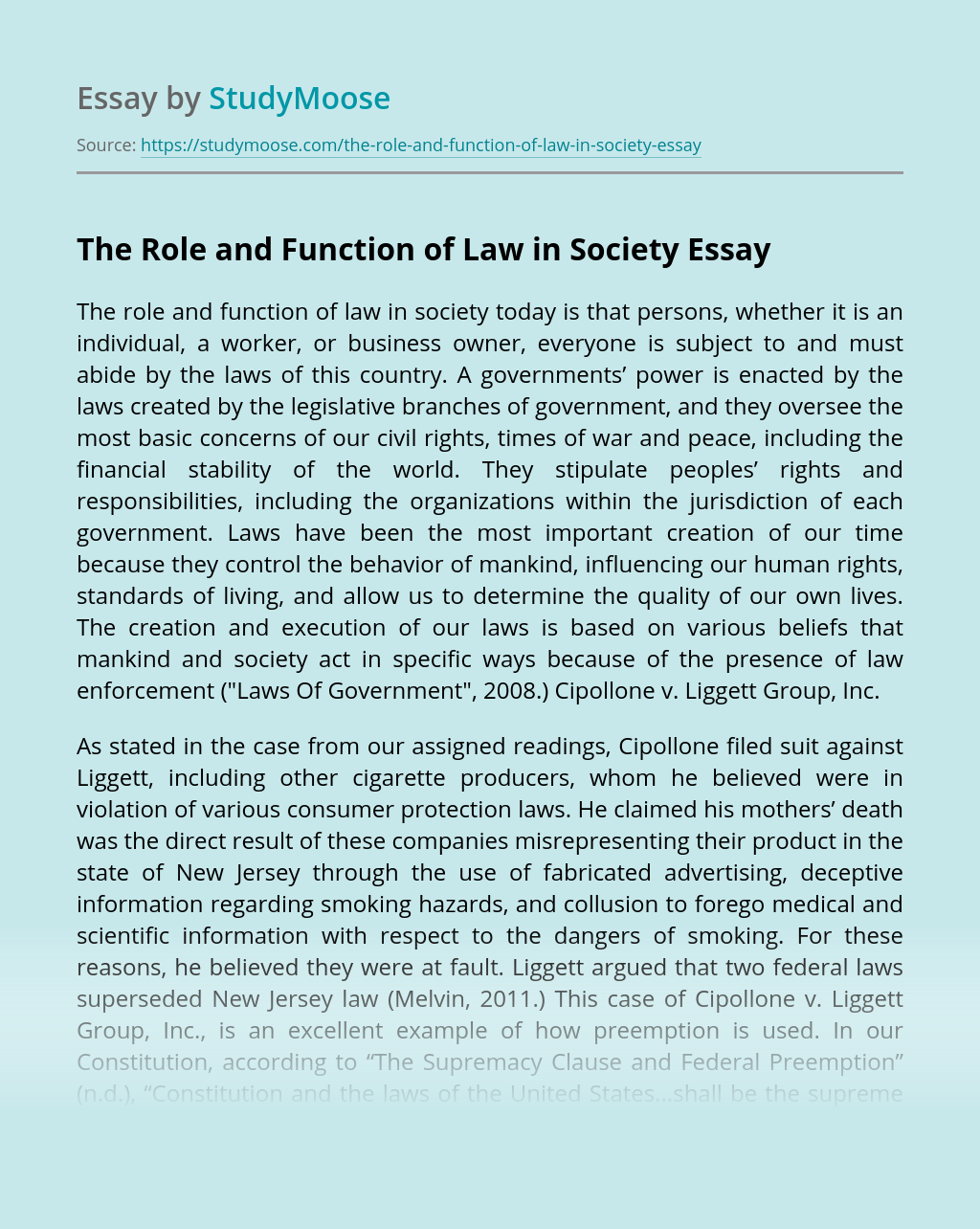