Poems from the Kokinshu: A Literary Analysis

Poems from the Kokinshu is an anthology of poems from the Japanese medieval times (Lawall. ed, 2002). The anthology is divided into different poems depicting human emotions as they vary season after season, or as people move into an entirely new environment. The principal theme of the poems revolve around the concept of love—the progression of feelings, the “entire course of the love affair, early yearnings, passionate meetings, sadness and regret” (Rodd and Henkenius, 1996). As each season, starting from spring, progresses, the emotions entailed in each poem also changes and develops.

Don't use plagiarized sources. Get your custom essay on
“ Poems from the Kokinshu: A Literary Analysis ”
Get custom paper
NEW! smart matching with writer

One of the principal stylistic features in the anthology is simile, wherein the author compares his feelings to his observation of what is happening in his environment. An example of simile is expressed in Poem II, 73: “like the world hollow as a cicada’s cast-off shell– oh cherry blossoms– you too will fade away just as we catch sight of your beauty” In this particular poem, the author compares his object of affection to a decaying shell of the cicada as the day turns into night.

Simile occurs in several poems just like the said example.

Another striking stylistic feature presented in the poem is antithesis, wherein the author expresses his emotions in contrast to his environment. In several poems wherein the prevailing emotion is grief, the author contrasts his feelings to the beauty of his environment. Here is an example from Poems 7 and 8 from the Spring Poems of the Kokinshu: “so longingly have I awaited the fresh flowers of spring, that they have dyed my soul and I see snow as clustered blooms on branches though I bask in the

comforting warmth of spring’s light how melancholy to think that my hair now wears a crown of winter snow” Aside from the aforementioned poems being examples of antithesis, parts of them also suggest allegory.

The phrases “they have dyed my soul” and “to think that my hair now wears a crown of winter snow” mean that the character in the poem is old and has white hair. The antithesis comes as he describes the warmth of spring in contrast to the cold winter which his body and soul are experiencing, i. e. , his old age.

Given that the anthology was written and compiled in the Japanese medieval times, the concepts or theme presented in The Kokinshu are parallel to other literary works done in different parts of the world, such as the Medieval Lyrics of the English Literature. Though a significant number of these lyrics talk about Christianity and religion, most works are also written in the concept of love with a pretext of nature. An example of a Medieval Lyric similar to the theme of a Kokinshu poem is Westron Wind (Western Wind):

“Westron wind, when will thou blow? The small rain down can rain. Christ, if my love were in my arms, And I in my bed again. ” As said earlier, the prevailing concept tackled in the anthology is love and its accompanying emotions that were given color and described in comparison/contrast to nature and its seasons. The concept of love, though internationally recognized throughout the centuries and millennium, is somewhat a secondary concept in the 21st century.

In this day and age, with all the prevailing issues such as technology, globalization and others, the concept of love is deemed unimportant to be tackled, although, it is indeed, as cliche dictates, the universal language. As Mario Vargas Llosa said, literature is “one of the common denominators of human experience through which human beings may recognize themselves and converse with each other, no matter how different their professions, their life plans, their geographical and cultural locations, their personal circumstances.

” Although the concept of love is not deemed as important as business or political concepts nowadays, it still is a ruling emotion that affects each person. Any person who has loved or wanted to love, or even despised love, can relate to the verses of the Kokinshu, including myself. References Lawall, S. N. (Ed. ) (2002). The Norton Anthology of World Literature. New York: WW Norton & Co, Inc. Rodd, L. R. , & Henkenius, M. C. (Eds. ) (1996). Kokinshu: A Collection of Poems Ancient

Poems from the Kokinshu: A Literary Analysis. (2016, Sep 22). Retrieved from https://studymoose.com/poems-from-the-kokinshu-a-literary-analysis-essay 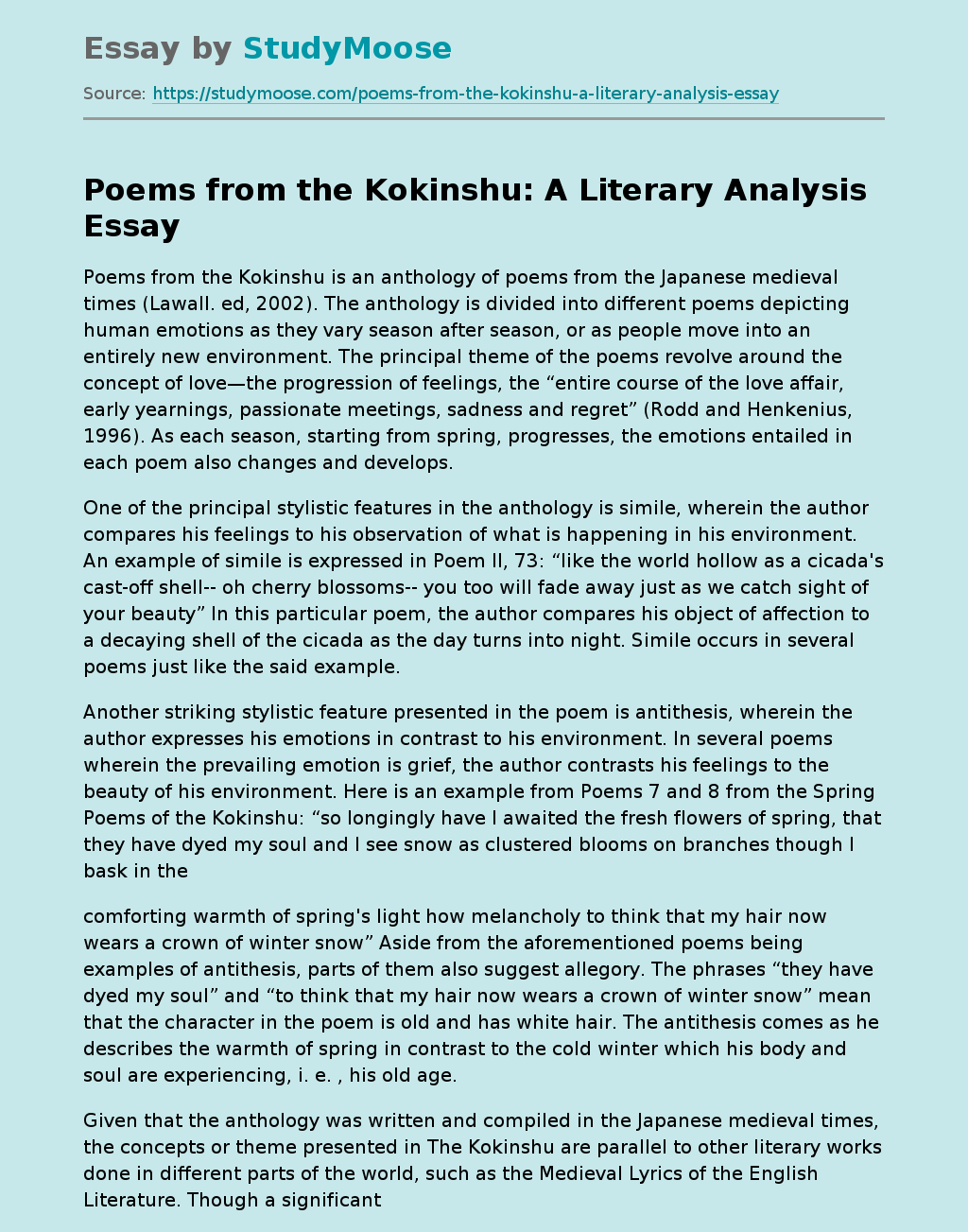