In the early 1950’s the playwright Arthur Miller penned the highly successful play: The Crucible. First produced in 1953 at the height of McCarthyism era, Millers Crucible was thought of as a strong political parable; a reflection of the communist witch hunts: The Crucible is one of the most famous historical and political allegories of all time. Set in the 17th century New England, the play is based around the Salem Witch trials. The Crucible includes many social and historical features, most of which are connected to puritan life and beliefs; but also to the American autocratic society.

Don't use plagiarized sources. Get your custom essay on
“ The playwright Arthur Miller ”
Get custom paper
NEW! smart matching with writer

This essay will study he characters in-depth, mainly that of Abigail Williams: and her aims of successful manipulation and influence over John Proctor to commit adultery. I will also look at Abigail’s psychosomatic behaviour in order to empathise with her character. Abigail’s fist scene begins in Act 1 where her savage rampage of manipulation and deceit begins. Although her intentions at this point are unclear to the audience, curiosity is still present in our thoughts.

We begin questioning Abigail as does her Uncle Parris. Along with Parris’ questioning and our curiosity of the truth, surely there is more to the ‘innocent girl’ than what meets the eye. Reverend Parris (Abigail’s Uncle) questions his niece as to why his daughter Betty is quiescent after his shock revelation in the woods. Parris continues catechizing Abigail by asking things such as “Your name I the town-it is entirely white…? And “… Is there any other cause… for you being discharged from Goody Proctors service”

These questions could be interpreted so that we feel that Parris does not feel he can trust his niece as she has not “opened” with him; this makes the audience feel a sense of uncertainty and mistrust towards Abigail, as if they are empathizing with Parris.

After Parris’ query on the topic of her cessation of employment, the audience may be curious of Abigail’s faults which led to her discharge: however Abigail again is very persuasive and believable as she pleads injustice from Goody Proctor by stating that “She hates me” “It’s a bitter woman, a lying, cold, snivelling woman”

This portrays a maleficent woman who constantly victimised Abigail. It is as if Miller is trying to depict Abigail as a placid girl, who thoroughly believes in the hierarchy of society; this directly links to her statement “They want slaves… let them send to Barbados for that, I will not black my face… ” It is as if Abigail is enforcing the different classes of people upon her uncle, stating that she believes herself to be more superior to the likes of Tituba whom she later blames for her own wrong doings. Abigail’s belief that she is more superior to others continues into her second scene with the girls.

In this scene Abigail is a very violent and mendacious character who is totally in control of herself and her peers. Her control is clearly visible when she “smashes” Betty across the face telling her to “shut it”. The violence portrayed by Abigail throughout the scene is accompanied by her continuous intimidation to the girls; she makes the girls feel as if they are helpless, dragging them into her fairytale world where she is in control. This is clearly visible where she says “Now look at you. All of you… Let either of you breathe a word… I will come to you…

I will bring a pointy reckoning… and you know I can do it” This particular part of this scene delineates the girls as weak, oblivious to their wrong doings; when the girls appear this way it is in strong juxtaposition of their power later in society “The children are dangling he keys to the kingdom” This quote from John Proctor is later emphasised in his conversation with Abigail. Abigail again, just as her first scene begins as an innocent character. She tries luring John into her manipulative fantasy world by reminding him of their sordid affair

“I know how you clutched my back behind your house and sweated like a stallion… ” by reminding him of this Abigail believes that she can have her way with him, yet again, just as she wishes. Abigail’s desperation for John is clearly visible throughout their scene “Give me a word John, a soft word” Here she is asking for comfort and reassurance, however Johns reluctance against her “I will cut off my hand before I reach for you again’ Over-powers Abigail’s desires. It is as if Proctor is standing up for what is right, which is love: rather than lust. 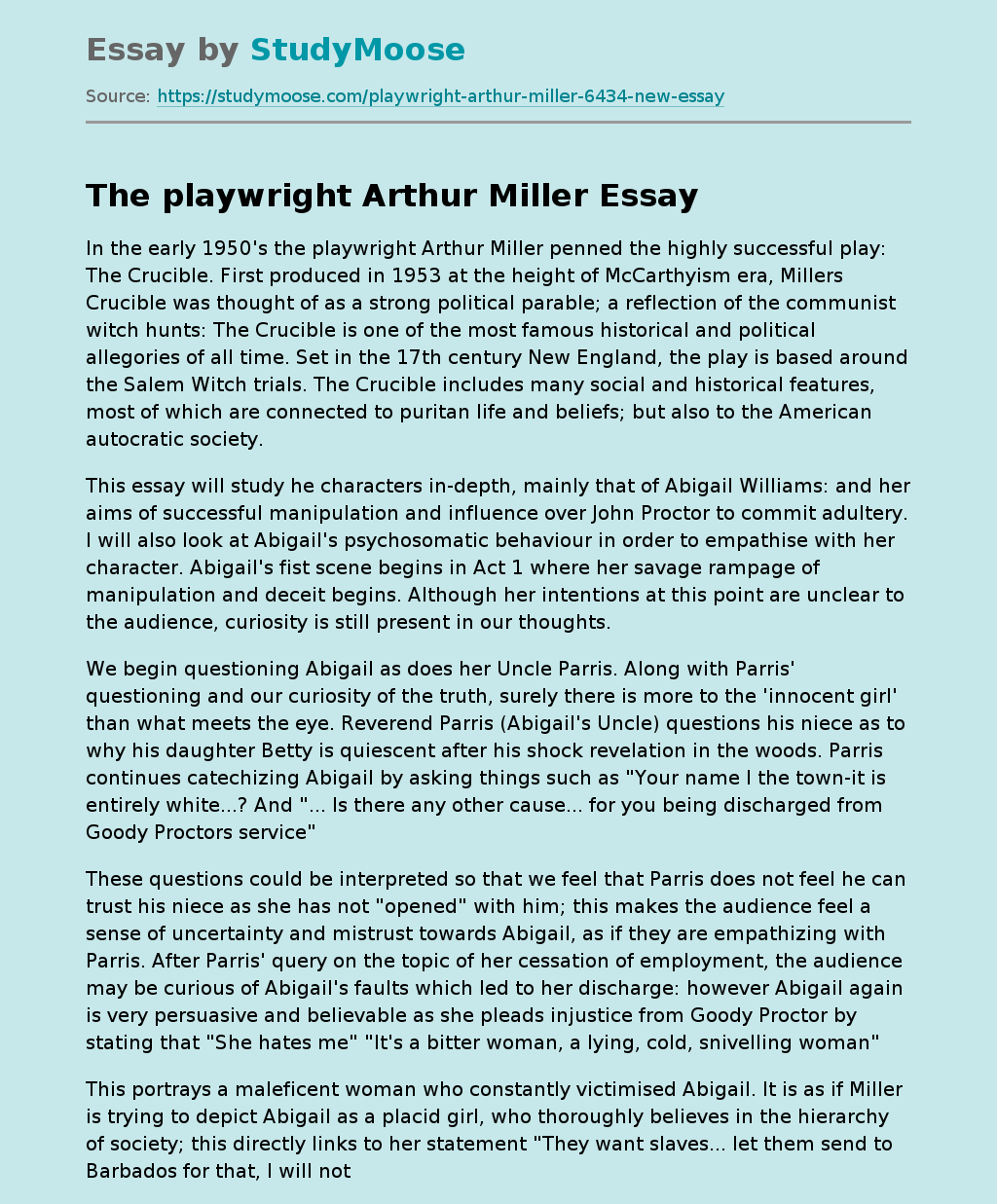