These are both massive pieces of art, ‘Guernica’ being 138 inches by 308 inches and ‘Reflections’ makes up panels 29 and 30 of the Vietnam wall. But their message is massive too In some ways ‘Guernica’ is the more horrific with its stark black, grey  and white portrayal of nightmarish horrors, so much so, that when an international conference was held in the Prado the participants asked for it to be covered during their stay. It was painted in response to the bombing of the Basque town of Guernica in 1937 when German planes were in the service of General Franco during the Spanish Civil War.

Don't use plagiarized sources. Get your custom essay on
“ Picasso’s Guernica and Tetler’s Reflection ”
Get custom paper
NEW! smart matching with writer

Usually referred to as an abstract painting, but figures are depicted  – a dying horse, a desperate woman in a burning house, a soldier with a broken sword, , and the wailing woman on the left holding her dead child and of course the Minataur, a mythical monster. The result must produce horror in all who behold it. Revulsion at what can occur  – at what man can do to man.

It is an instantly uncomfortable and according to art author Jesse McDonald ‘a devastating attack on the cruelty and folly of man.’ (McDonald, front flap ‘Pablo Picasso’.)

Lee Teter’s work, a memorial to a different war , that of Vietnam, is much more realistic, even though the majority of the figures in the picture are meant to be dead soldiers. It is not at first as uncomfortable as ‘Guernica’, but the longer one looks at it the more one realises there is very little difference.

The figure standing in front of the wall was originally dressed in fatigues, but is now depicted as a business man – this was felt to be a truer reflection of life for many veterans. This man has lost comrades in what many felt to be a pointless war that America should not have been involved in. More than that though  – he has survived and carries in himself  the guilt that that involves. The dead are depicted as shadowy figures, one of them is a portrait of Micki Banks who actually lost his life in Vietnam.

Picasso’s picture is like an instant snap shot, but Teter’s looks at the long term results, so surprisingly I find the Picasso easier to deal with, because in life people tend to get over problems, but Teter makes me realise that there are some things we cannot and should not forget. 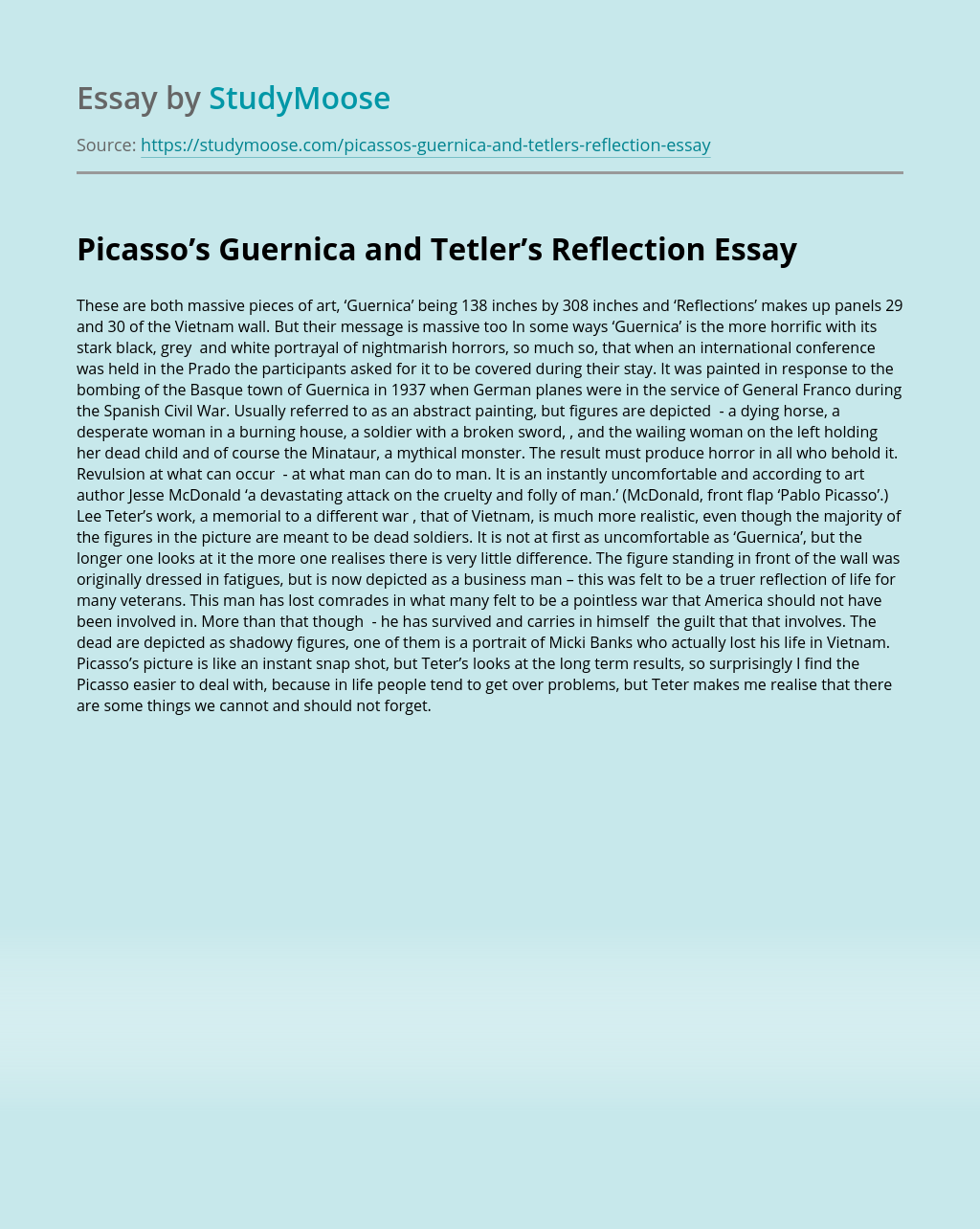