One of Pablo Picasso’s famous pieces of artwork is the ” Guernica”. This piece can be perceived in many different ways. Guernica was produced in the year 1937, during the mortifying bombing of in Guernica. Picasso produced the piece with oil and put it on a canvas. That to me has sort of a symbol to it, meaning he put his own thoughts and emotions into his pieces of artwork. Maybe putting the oil on the canvas had a special meaning to Picasso.

Don't use plagiarized sources. Get your custom essay on
“ “Guernica” by Pablo Picasso ”
Get custom paper
NEW! smart matching with writer

As in he could describe how the pain and the suffering of the town had felt during the bombing. I think that this painting has two different types of style going on in it.

The first style would be Cubism, and I will explain why it is. Cubism is explained as a style of art that has many geometric shapes that are incorporated into it, making it look abstracted. If you look at the shapes, one would start to look kind of like a Greek house or temple.

And then I think his other style would be abstraction. Some shapes are just thrown into the mixture, but yet you can sort of tell what they are supposed to represent. There are jagged edges as well, which produce some sort of horror and or anguish, and the complete chaos that ensues it. I can see that there are many different elements or styles that are in this piece. That being said, they have to do with the lines. There are also sharp edges which are thrown all around in certain places.

They also have some triangle looking shapes, that give the picture the multiple dimensions. It seems to me that there is virtually no balance in the artwork. It is like there is an almost uncanny amount of darker colored places. The darker colored places are resembling the anguish and hurt throughout it. Whereas the lighter colors are resembling that they to will soon be overshadowed by the darker colors. To me there seems to be a level of some repetition in it, that is almost hidden by the variety in the piece. It seems semi symmetrical in certain areas, and then again will become asymmetrical in another area which will balance it out. There seems to be some similar shapes that have been used over and over again. Which are closely joined together to almost fit like a complete puzzle piece. They can appear to seem slightly misplaced and almost lost. What sticks out to me the most in the picture, is the fact that the mom and her baby are crying over in a corner. And that the bull, is kind of acting like a “God” like being. The women is crying out to him in need, and he is sort of just listening to her cry.

I think the meaning behind this painting is pretty straightforward. Picasso fashioned this piece for the Spanish people after a annihilating bombing on the city of Basque. The piece was fashioned to show how chaotic and crazy the war really was. It was also representing the pain and the suffering really was for the people who had gone through it. The one picture that stuck with me was the mom holding her baby, her and the child both crying. Meaning that the war will take innocent lives, and that war is corrupt.

The picture at first glance looked almost like a child drew it. It sort of reminded me of how distorted and unnoticeable pictures children can make when they are younger. But after I have gotten to learn the history behind the artist and the artwork, I have grown to appreciate the piece. The piece shows the pain and the suffering that someone can go through in their lifetime. While having some emotion, that we should love people and everything that comes with them. Emotion can be a hard thing to express in words, as well as in drawings. But yet Pablo Picasso did it with just a paintbrush and some oil. Before this assignment, I knew nothing about Picasso. But after doing some research on him, I have come to terms that he is a fantastic artist.

"Guernica" by Pablo Picasso. (2020, May 20). Retrieved from https://studymoose.com/guernica-by-pablo-picasso-essay 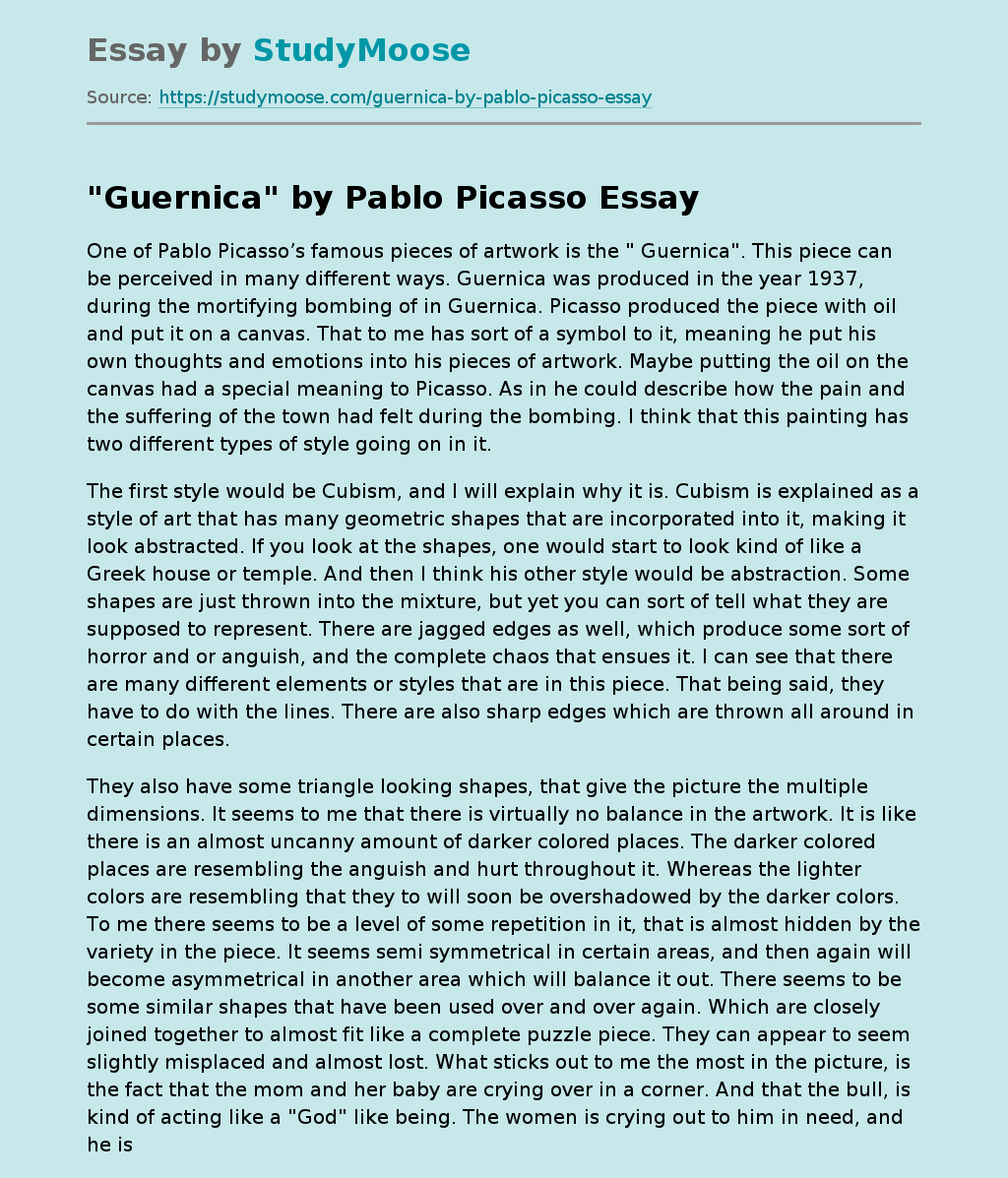