The essay deals with the phenomenon of epiphany as a very interesting and unique literary device. It is not very common, though. Epiphany has a close relation to philosophy and psychology. The roots can be found in Christian religion, where “epiphany refers to the realization that Christ is the son of God” (Wikipedia, 2012). In literature it can be understood as a moment of sudden realisation of the truth, a moment of insight when the characters are stuck for a while. James Joyce uses this phenomenon throughout his short-story collection Dubliners.

Don't use plagiarized sources. Get your custom essay on
“ The Phenomenon of Epiphany in Selected Stories of James Joyce’s Dubliners ”
Get custom paper
NEW! smart matching with writer

Joyce is an Irish writer and poet, one of the most influential writers of the 20th century. He was a key author in the development of the modernist novel. His major works include a novel Ulysses published in 1922 and a short-story collection Dubliners published in 1914 (Wikipedia, 2012). The further paragraphs analyse three of his short stories and try to find examples of epiphany.

All the fifteen stories in Dubliners have their own story line and characters but anyway a hidden connection could be felt between them.

An interesting fact could be found when reading through – the collection starts with children characters stories (“The Sisters”, “An Encounter”, “Araby”), continues with stories about young adults and students (“Eveline”, “After the Race”, “Two Gallants”) followed by adult characters stories (“The Boarding House”, “A Little Cloud”, “Counterparts”). Getting closer to the end, the characters become older and older (“Clay”, “A Painful Case”, “Ivy Day in the Committee Room”, “A Mother”, “Grace”). The collection, and also the life cycle, is concluded with a novella symbolically named “The Dead”, a story about the value of life and death.

The most popular story from Dubliners is called “Eveline”. It describes one late afternoon of a nineteen year old girl who faces a big decision – whether to stay with her father and brother or escape with a sailor Frank, her boyfriend, to Buenos Aires. In the very beginning of the story there are many suggestions of Eveline’s unhappy life. For example: “She was tired” or “objects which she had dusted once a week for so many years”. Also “broken harmonium” could stand for a broken family (Joyce, 2008, p. 25). She lives in routine, where no change is acceptable. “He is in Melbourne now.” (Joyce, 2008, p. 25) says her father casually every time he speaks about a priest on a yellowing photograph. That means he despises people who changed their life radically. Eveline is strongly bound by Catholic beliefs. Her family keeps a “print of the promises made to Blessed Margaret Mary Alacoque” (Joyce, 2008, p. 25), a symbol of God’s love always present to each of us.

It used to be a typical decoration of an Irish home at that time (Wikipedia, 2012). On one hand she fears her father, she is unsatisfied with her job and has to take care of two young children but on the other hand she feels the duty of keeping the house together for her dead mother’s sake. The moment of epiphany comes at the end of the story when Eveline stands at the station and waits for the boat. We can read the inner fight in her mind – escape or not? She also asks God to direct her. Frank speaks to her but she does not listen, she is “paralysed”. Finally, she decides to stay with her family and rejects to come with Frank. The ending is very emotional and shows how the character prefers to stay in daily routine and fulfil her duties.

The second short story chosen for this essay is called “A Painful Case”. It is also concluded with a moment of epiphany, nevertheless the main character is completely different. Mr Duffy leads a simple, routine, unadventurous life where everything has its order. He lives far from the centre of Dublin in a white room with only the most necessary furniture.

All his things have their place; books are for example “sorted according to bulk” (Joyce, 2008, p. 86). He has no friends and only occasionally goes to an opera. He does not like changes in his life. When he meets Mrs Sinico, his life starts to change, he becomes more emotive but soon he does not like it and wants to escape from the relationship. He is probably scared of the new feelings. When Mrs Sinico once grabs Mr Duffy’s hand expecting their relationship to go further than just intellectual talking he rejects it and leaves her. The same shock and surprise comes when he reads about her death four years later. At first he blames himself that he broke her heart and caused her death, he regrets leaving her and rejecting her love. We may expect that he would rethink his life and start again a new one with emotions and perhaps another partner but in the final moment of epiphany he stays “paralysed” (like Eveline in the previous story) and returns to his daily routine. An interesting fact is that Mr Duffy’s name is derived from the Irish word “dark”, which also suggests gloomy atmosphere and loneliness in which he lives (Spark Notes, 2012).

The last story to be analysed is “Clay”, which is very different from the others. Maria, the main character, is an older woman who enjoys her ordinary life. She is described as very nice, helpful, full of energy and loved by everyone (Joyce, 2008, p. 81). It seems that nothing really happens in the story, perhaps Joyce wanted to write a story of a woman who has no big troubles and turnovers in her life and small events are big for her (Spark Notes, 2012). Buying of a cake for Halloween’s celebration seems to be a ceremony for Maria. She also plans everything in the smallest detail. When she gets to the Halloween party and finds out, that her plum cake was stolen in the tram “she nearly cried outright” (Joyce, 2008, p. 83). That is an example that Maria is furious because of small problems. This seems quite sad and the reader might feel sorry for Maria when reading the story. But it got worse when she picked a symbol

of “clay” in a game, which symbolizes an early death. There is little epiphany in this story,

but strong symbolism in “clay”– clay in a grave. It could mean that she is stuck in a routine life and it is like she was dead. She is frustrated, in a state somewhere between living and dying (Spark Notes, 2012).

The essay was aimed to find examples of epiphany, which occur throughout the whole book. It was very interesting to read it and learn more about the issue. Dubliners have an extraordinary atmosphere that depicts the ordinary middle class life in Dublin in the beginning of the 20th century.

The Phenomenon of Epiphany in Selected Stories of James Joyce’s Dubliners. (2020, Jun 02). Retrieved from http://studymoose.com/phenomenon-epiphany-selected-stories-james-joyces-dubliners-new-essay 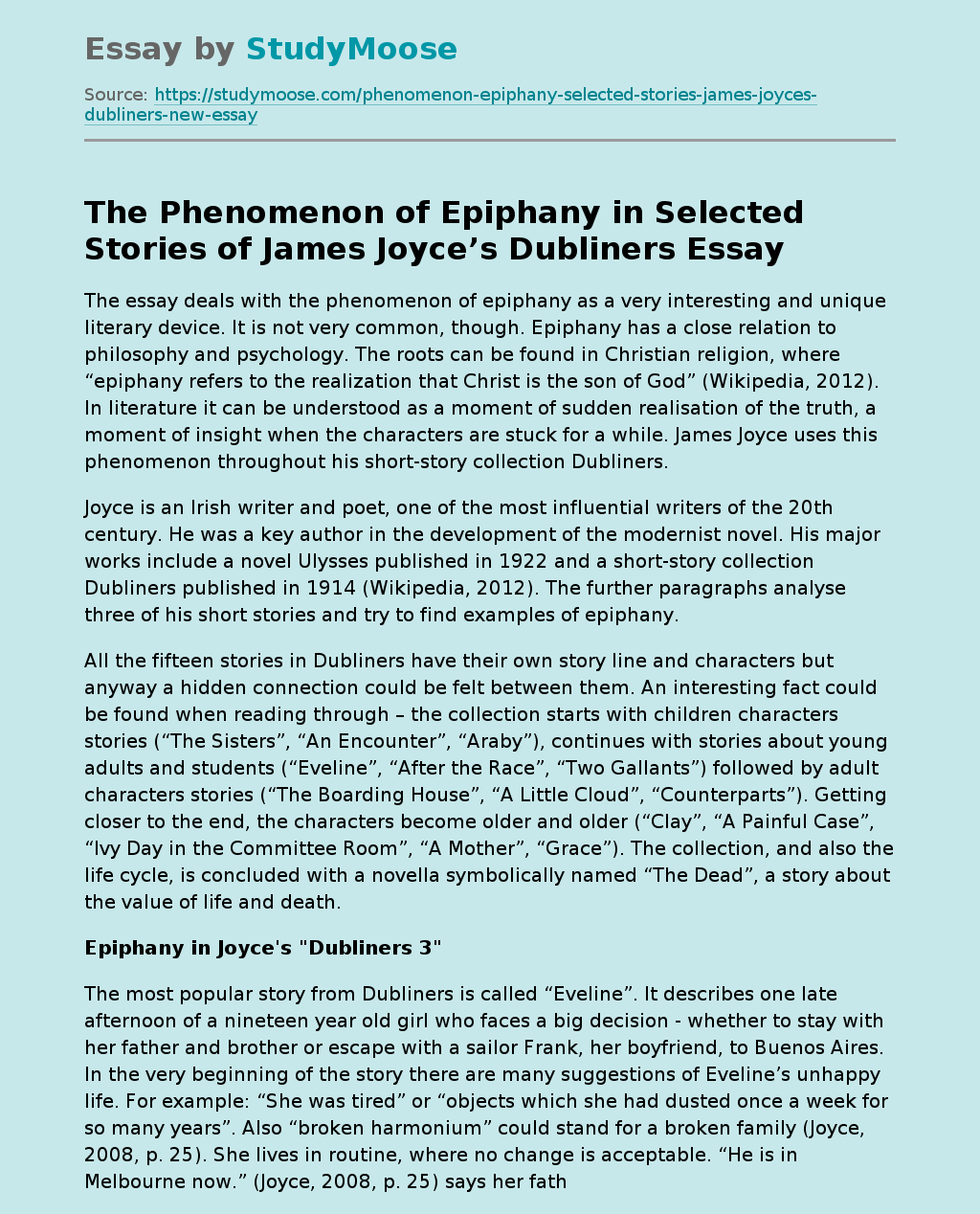