In James Joyce’s “The Dead,” through an epiphany the main character, Gabriel, realizes the true relationship between him and his wife, Gretta. The epiphany Gabriel experiences is the direct effect of his wife’s confession to having a love before she met him. Not just a love, but a true love named Michael Furey. Before Gabriel had heard this story he continuously looks at his wife thinking about how much he loves her and how much he wishes they could only feel the excitement of their relationship.

Don't use plagiarized sources.
Get Your Custom Essay on Gabriel’s Epiphany in James Joyce’s “The Dead” Just from $13,9/Page

His emotions and feelings are shattered when he hears Gretta’s story of Michael Furey.

At first he feels anger toward her. Anger at the fact that he was not her first love. He is also humiliated to feel as he did before, foolishly in love, when it was quite clear their relationship was not what he thought it was. He thinks about how she still carries so much fondness for her dead lover and he grows envious that she had found her one true love.

After staring at his wife asleep on the bed, he feels deeply saddened that he will never experience a true love relationship in return from his wife. He wants her to be happy, and he knows she is actually devastated even after all these years of appearing to be content in their boring marriage. He decides then that he will make it up to her. He will be the man she always wanted and needed. Gabriel makes the decision to move to Ireland, the country he detests in the beginning of the story. This is a sacrifice he will make to show his true love to his wife, Gretta. A sacrifice which in no way would have been possible if he had not experienced the epiphany within the story. 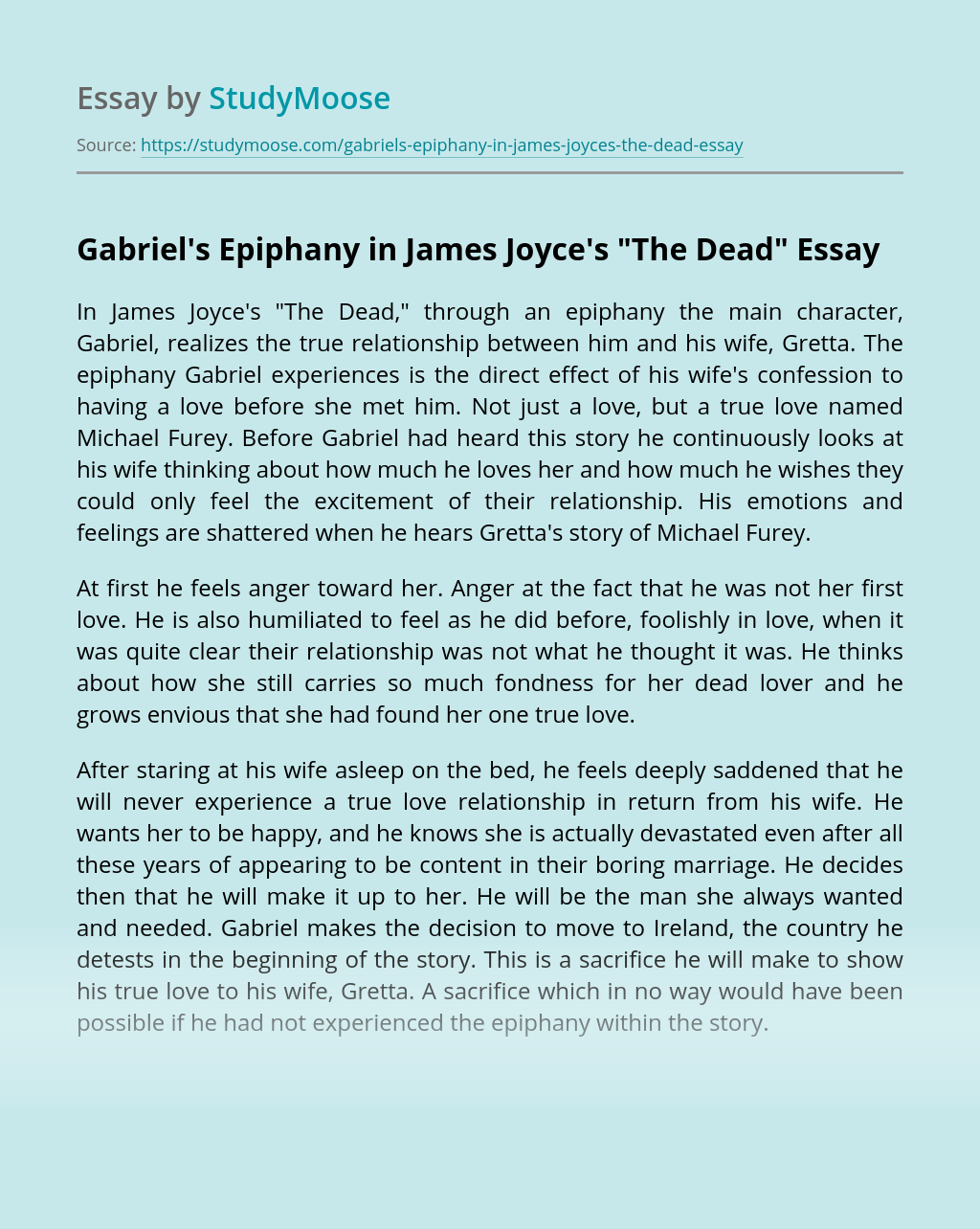 Review of related studies on library service in the Philippines

Library has increased with the complexity of our society. The rapid growth of technology has meant that many gadgets and equipment have appeared and continuous progress of the world the help of the Science and Technology. Library is considered the heart of the school it is expected to be taken care of for its normal... VIEW ESSAY

Arthur Millers play, A View from the Bridge, follows the story of the Carbone family and the troubles which ensue after the arrival of Marco and Rodolpho in the patriarchal Red Hook, New York. Throughout the melodrama, the relationship between Marco and Eddie develops as masculinity and honour gain importance. At first, the relationship is... VIEW ESSAY

In the lay Bisclavret by Marie De France she tells the short story of a failing marriage. there’s a baron named Bisclavret who has this uncontrollable curse that makes him turn into a werewolf for 3 nights a week . His wife who was unidentified harasses him into revealing everything and repays him for his... VIEW ESSAY

The movie The Book of Eli directed by the Hughes siblings is a cinematic screen of dystopian genius. Lots of dystopian films review federal government participation, personal privacy issues, and ethical concerns. However in The Book of Eli, the Hughes brothers take a dive to a different part of modern-day society: religious beliefs. Various faiths... VIEW ESSAY

Abstract Developments in the world throughout the years have greatly impacted the world in various ways. These developments include technological and socio-political changes. These changes have made social activities today to become incomparable with those from a hundred years ago. Don't use plagiarized sources. Get Your Custom Essay on Gabriel’s Epiphany in James Joyce’s “The... VIEW ESSAY