While reading the collection of stories we redundantly find ourselves drawn to the female characters. Most of the works feature either a distinctive woman protagonist or an established woman as the attention of the protagonist. Although we get a mixed feeling for what exactly Joyce wants us to understand about women at the time of the book’s publication, we get the overwhelming feeling that these female characters are meant to provoke an attraction from its readers.

In Richard Brown’s book, James Joyce and Sexuality, he writes, “the treatment of sexuality was of the utmost importance to Joyce’s creativity and at the heart of what his fiction might be trying to investigate” (Brown, xxi).

Don't use plagiarized sources. Get your custom essay on
“ Gender Roles in Joyce’s Dubliners ”
Get custom paper
NEW! smart matching with writer

Whether these women are trapped in a world of political, religious, or marital unrest they can’t seem to escape, or are the primary focal point for the male narrator, these prominent women serve as imperative roles in the major themes of Dubliners. Eveline, Maria and Gretta are Joyce’s attempts to place women into a society he believes functions better without a marital institution.

Joyce’s notorious criticism of the modernistic approach of women opposed to their traditional counterparts is reflected and contradicted in these three stories. He uses these female protagonists to identify with his own personal life, in which he refuses to marry his long term “companion”, Nora. He declined the conformity into the conventional lifestyle that was expected of him and “was able to reassert the advanced notion that ‘Paternity is a legal fiction’ and to maintain his resistance to ‘the atrocities of the average husband’” (Brown, 15).

After we accustom ourselves with his ideology it becomes easier to interpret why he chooses to place his female protagonists as helpless women who seem to be victims of their inescapable lives. While he hints that female figures have been the source of help throughout his life he also asserts that he detects intellectual women (Mullin, 205). Joyce’s opposing viewpoint might be the reasoning behind such tragic roles of females in Dubliners.

This underlying negative theme is carried over to other stories in the book, such as the prostitute in “Two Gallants”, whose main purpose is to provide an income to the male figure in the story by manipulation and deceit, and the fact that neither of the young boys in the first three stories have any prominent mother figures in their lives. In his personal life, Joyce’s suspicions of Nora began to increasingly deepen the more the years passed. The more time apart they spent, the more he was convinced of her actions toward infidelity.

He felt an imminent betrayal was bound to occur in his love life and this obsessive mentality is mirrored in Eveline’s betrayal of Frank and Gretta’s betrayal of Gabriel. In an attempt to give Joyce some credit concerning gender roles in the series of stories, I can observe some positive distinction in the way some women are portrayed. In “Araby” Mangan’s sister, who remains unnamed, represents the religious Mary, as does Maria in “Clay”. But more than that she serves as the heroine of the storyline. Because she remains nameless the reader is forced to dwell upon the only name she is associated with. Those informed will be minded of the Irish poet James Clarence Mangan, said to be an inspiration to Irish movement but nevertheless admired by Joyce” (Bloom, 28). We are also obliged to recognize the women in “The Dead” who stand out so vividly in the foreground of the play. The superiority of Gabriel’s aunts and of Miss Ivors in comparison to our young, male protagonist gives us a fresh perspective on the roles of women and we are introduced to what seems like Joyce’s first attempt at an egalitarian standpoint.

The brave individuality of Gretta apart from her husband, Eveline who pays the bills and provides for her brothers while her father drinks his life away, and Maria who everyone dotes over, gives the reader hope that perhaps women can be established figures in Irish culture. These women are also shown in a positive light in contrast to the male narrators who overtly fail in their personal and professional lives time and time again. Still the illusion of escapism abruptly comes to a standstill while the characters are thrown back into a paralyzing reality.

All of the protagonists experience the lingering sense of hopelessness that connects each of them together, irrelevant of gender. This sense of a disconsolate life they can’t run away from wasn’t partial to Joyce in his writings when it came to either sex. His overall goal in Dubliners was to show what a devastating nation Dublin has become due to their indifference to the social changes around them. This attempt to accredit females as individual contributors to society was the outcome of Joyce’s backlash at the customary life they were conjured to live has become a blurred line (Mullin 153).

His rebel curiosities put his works front and center to controversies that he welcomed joyfully. Nevertheless he used these women in his book as bait to fuel debates on subjects that were never discussed before his works surfaced in Ireland. We can approach his literary works as a defense toward women and the new modernized age, or we can disregard it as a series of stories that victimizes women and their reputation in society. Either way, the female figures serve as a perspective in the book that at first glance we might have overlooked were it not for our understanding of Joyce’s real life ordeals and beliefs. 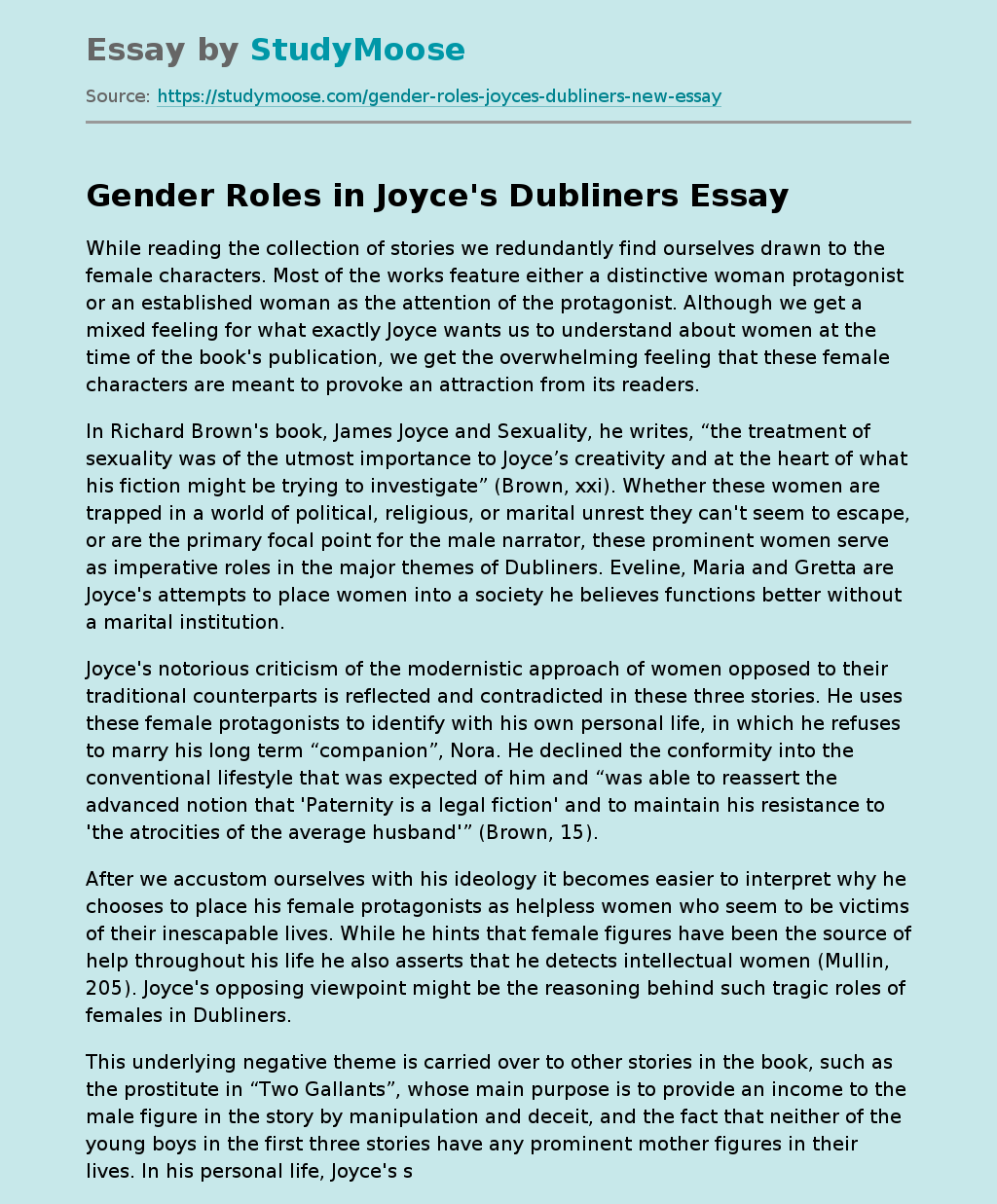