Joe Keller is a 60 year old man who lives in an American town during the Second World War. Joe is the father of two sons; he is the father of the Keller family. He works in a factory which used to make p-40 cylinder heads. He has a high status in the society. Before the start of the play Joe works with Steve Deever, at their P-40 factory. Joe is absent for one day, he is supposedly sick and Steve has to do a very important job.

Don't use plagiarized sources. Get your custom essay on
“ Personal Attitude to Joe Keller ”
Get custom paper
NEW! smart matching with writer

Some broken cylinder heads were produced that day, Steve phoned Joe; he asked Steve to sell them anyway, but the twenty one aeroplanes and pilots crashed. The twenty one pilots died in the act. All the blame was put on Steve because the telephone call where Joe had told him to disguise the cracks and sell them but it had been denied by Joe, so Steve was found guilty. Joe was declared innocent; Steve went to jail and took all the blame.

Proficient in: All My Sons

Joe is a very hard worker; he would do anything for his family. At his job, he works so hard only for his family and to bring money home to keep them all happy. We can see that Joe loves his family a lot because he puts in Steve Jail only to get money from the cylinder heads. He has a lot of friends, like Bert. We know this because at the start of the play we can see him play with Bert:

“For what! Bert, the whole neighbourhood is depending on you.

A policeman does not ask questions. Now peel the eyes!”

With this quote we can also see how sociable Joe is and how he loves small children. We can see that the children like him. Joe has a lot of guts, when he comes back from Jail he deliberately walked down the street although a lot of people though he wasn’t innocent. Chris says he has a lot of guts for doing this. He tells him:

he says it with a sense of humour. We can also know that the Keller’s, especially Joe, have a lot of friends because Annie says this: “People like to do things for the Kellers. Been that since I can remember”. Joe has a big personality, he has a lot of charisma, for example in this sentence we can see it: “There’s gonna be a wedding kid, like there never was seen! Champagne, tuxedos-!”

However, he also has bad qualities. Joe, used to make P-40 cylinder heads, and one day all went wrong. Joe is also deceitful and a very selfish person because he makes only P-40s so that other people buy them and kill another person or himself. He doesn’t care about other people’s life or family. He only wants money for him and his and doesn’t mind about what happens to other people. During the P-40 incident he acted in a very strange way. At the start of the play we feel as if he is a very good man and that he cares about his friends like Steve, but when he knows that some unreliable cylinder heads are coming and he is supposedly sick it makes us feel bad towards him. We know he was supposedly bad because at the end when Kate and Joe are talking with George, Kate says:

at that time was when the event happened. This makes us feel bad towards him. That day Joe didn’t go to work and Steve had to do it all himself. All the blame was for Steve because when they went to the courts because the 21 pilots had died, Joe denied the phone call in which he had told Steve to fix them anyway. This makes us think he is a very selfish man. He justifies his behaviour by saying that he did it for Chris and his family.

He says that his family is the most important thing and that he didn’t mind to do what he did to make his family happy. In my opinion his excuses are unacceptable, because you cant excuse killing 21 people only so that your family has money, because live is more important than money. Also you can do a lot of things for your family but you cant never kill other people just for your family. I think his excuses are not acceptable.

At the end of the play, Joe commits suicide; I think this is caused mainly because the pilots trusted him like a father but he left them down badly and Steve being in jail. I think he has really changed during this play because before committing suicide he says “All my sons” this shows that his sons were an extremely important thing for him. This events change his life completely, in my opinion this events make me think worse of him. At the start of the play he is a not very honest and sentimental man he cares of his and likes to be with them. He is very sentimental; we know this because when he starts to talk with Chris about his money he speaks in a very emotive way. For example:

“I mean, with joy, Chris, without shame… with joy.”

In this part we can see how affectionate he is and how much love he has towards Chris. At the end of the play he becomes miserable and he doesn’t care about the things that happen, he becomes careless. It changes him very rapidly, it changes him to worse. The suicide he committed makes me feel bad towards him; I think he is acting in a very selfish way. From my point of view Kate is suffering a lot and the suicide of Joe makes her feel worse. The family is very affected by the death of Larry and now Joe kills himself, he doesn’t think about Kate and Chris.

I think Joe has learnt a lot from the events that have occurred and that if he had another opportunity he wouldn’t commit the same errors again but at the same time I think he hasn’t learnt about all the events of the play especially towards the relationship between its job and his family because at the end he recognises it was bad done what he did with its job and family.

In conclusion, I think that the audience at some times feels sorry for Joe, especially at the start of the play and there are other moments in which they hate him such as when he puts Steve in jail. He is also an extremely selfish person and only wants more and more money, he is very ambitious, he doesn’t care about other people’s lives and families. On the whole, Joe Keller has good aspects and bad aspects, he is a friendly and emotive person but I think he is an extremely selfish person. Joe changes during the play, I think that at the start he is a more rough and at the end he starts to be more sensitive and affectionate towards other people. From my point of view, he is an ordinary man of that time, at those periods people couldn’t care less about other peoples lives. Everyone wanted to do money out of the war I know this because of this quote:

and I think that he did as everyone. We know this because at the start of the play he talks with Chris telling him that he made his money like everyone else.

“Becouse its good money Chris, there is nothing wrong with that money” with these words he is defending the money he made out of war and death as everyone else. Joe Keller is simply an ordinary man. 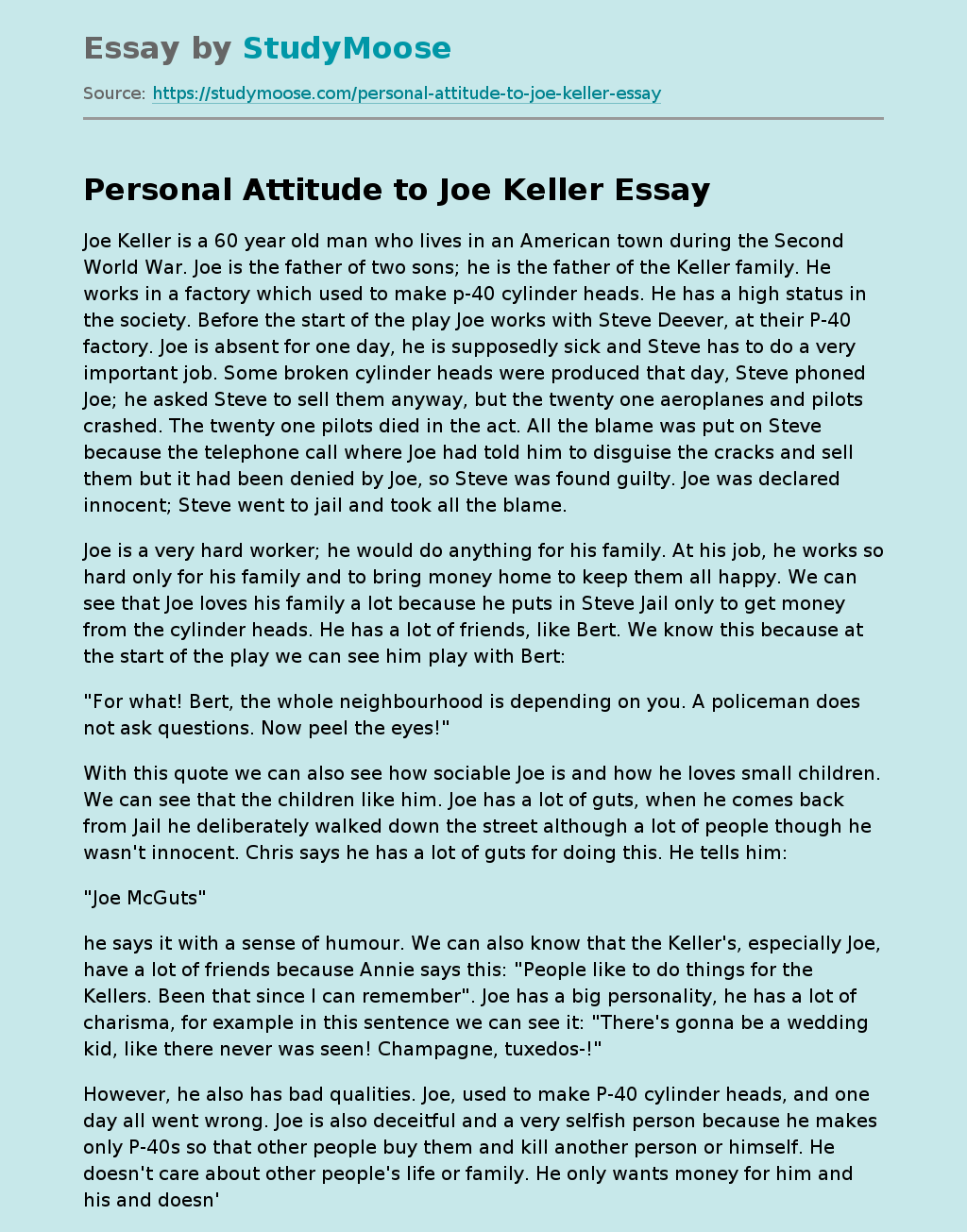