Maestro Keller Was Bad for Me

Keller, as Paul’s piano teacher, was both a positive and negative influence in Paul’s life. It would be understandable for Paul to feel as if Keller “was bad for him, the worst possible teacher”, judging from the way he later narrates his life. Keller’s mysterious past and renunciation of music ruled his teaching style, subsequently suppressing Paul’s musical passion. In spite of this, it would be more reasonable to believe that Keller’s teaching methods suited Paul at the time of his “youthful arrogance” and kept him grounded.

Don't use plagiarized sources. Get your custom essay on
“ Maestro Keller Was Bad for Me ”
Get custom paper
NEW! smart matching with writer

It is only when Keller almost departs Paul’s life entirely, that the adult Paul begins to realise and appreciate Keller for the great “Maestro” he was. First impressions can often be misleading. Not used to being critised and having very disciplined lessons, Paul initially refers to Keller as a “Nazi”, failing to understand the word for what it really meant. However, Keller’s overly strict teaching style was not entirely professional.

It was the result of his dark past, and a “father’s hardness”.

The murdering of Keller’s wife and son in Austria destroyed Keller as a person. For this reason, he repressed any emotional attachment he had that was associated with the guilt, and his home. Keller declared that “nothing could make [him] homesick”, demonstrating the depth of pain he incurred. This became evident in the passing of the priceless, signed first edition Czerny manuscript while Paul was in Adelaide. The only way Keller showed affection was “at a distance, carelessly, as if it meant nothing”.

It was unfortunate for Paul, only a teenager, to bear the burden of such destruction. As a result of the heart wrenching experience he endured in his past, Keller lost his love for life and past his disillusionment on to Paul. Keller’s setback on life made him view the world in a cynical way, and although the “textbook” was seen as educating, it was wrongfully conveyed to Paul. As a teenager, Paul was still trying to discover the world and make sense of what it was. It was hard for Paul to put music, so gracious and beautiful, in the same world as the “squalid stories”.

Also, how is it possible for a teacher to teach something they have no interest in, no passion or love for? In this sense, Keller was limited in what he was able to teach. Paul, therefore was only ever capable of attaining “technical perfection, not musical perfection”- to play Beethoven “technically perfect”. Nonetheless, Keller’s advice and life lessons benefited Paul by opening his eyes to all different aspects of life and changing the way he thought, therefore being a great teacher. Not only was Keller Paul’s piano teacher; but he was also a mentor, and father figure who kept him grounded.

Ironically, Paul does not realise this at the time but as an adult reflecting on his youth, he could finally acknowledge Keller for who he was; an eminent performer at the height of his career and “a pupil of Leschetitzky”. Keller’s life was compared to Paul’s when a dinner was held to celebrate Paul’s A+ in the event of the champagne pop. This image reflects the ups and downs of life. Although Paul was shown to be the champagne cork and passed through the ceiling fan undamaged, Keller was not as fortunate. He was seen as a cork, which would pop up, and became completely mutilated by the fan.

Despite the fact that Keller was so damaged and hurt inside, he still managed to continually uphold Paul’s success and assured Paul that he could win the piano competition in Adelaide and still “keep [his] self respect”. As Paul could be touched by, and moved by this high level of achievement, Keller reminded him “every fish has its depth”. He meant that the level of achievement Paul is capable of is not limiting and that Paul should work to reach this level of accomplishment, rather than downgrading himself to a world of “squalid, foolish dreams”.

As Paul’s teacher, Keller could be seen as a model for him to aspire to, the height to reach, and to achieve integrity. It was the high standards that Keller set, which centered the idea of perfection as an important element to both Paul and himself. Keller was inclined to teach Paul “everything [he was] able to learn” and Paul was determined to become a “concert pianist”, to attain the unattainable and be the “one in a million”. Paul would practice and practice, “playing till [his] hands ached”. Keller reassured him that it was not about winning, as “you never win by much”.

For Paul to have advice and from someone of such distinction, would be considered an achievement in itself making Keller an impressive teacher in this sense. Although Keller realised that Paul could never be the best, he tried to save Paul from the misconception and asserted that it is better “a small hurt now than a wasted life”. In this, Keller’s repertoire of skills and advice benefited Paul during his youthful years and as a grown man, making him a good teacher. By the end of the novel, Paul and the reader both come to the realisation that Keller had taught Paul valuable lessons.

Although at first Keller was tough to decipher, Paul learnt a great deal from him and about him. Looking back on his adolescent years in Darwin, Paul could finally recognize things for what they were. It is through Paul’s eyes as an adult that we can see Keller was in fact a wonderful teacher. The light on their bittersweet relationship only shone when Keller fell ill and passed away. Paul loved Keller for who he was, and what he did for him, admittedly agreeing that Keller had spoiled him, being taught by the best. By the end of the novel, the reader comes to the same conclusion.

Maestro Keller Was Bad for Me. (2020, Jun 02). Retrieved from http://studymoose.com/maestro-keller-was-bad-for-me-essay 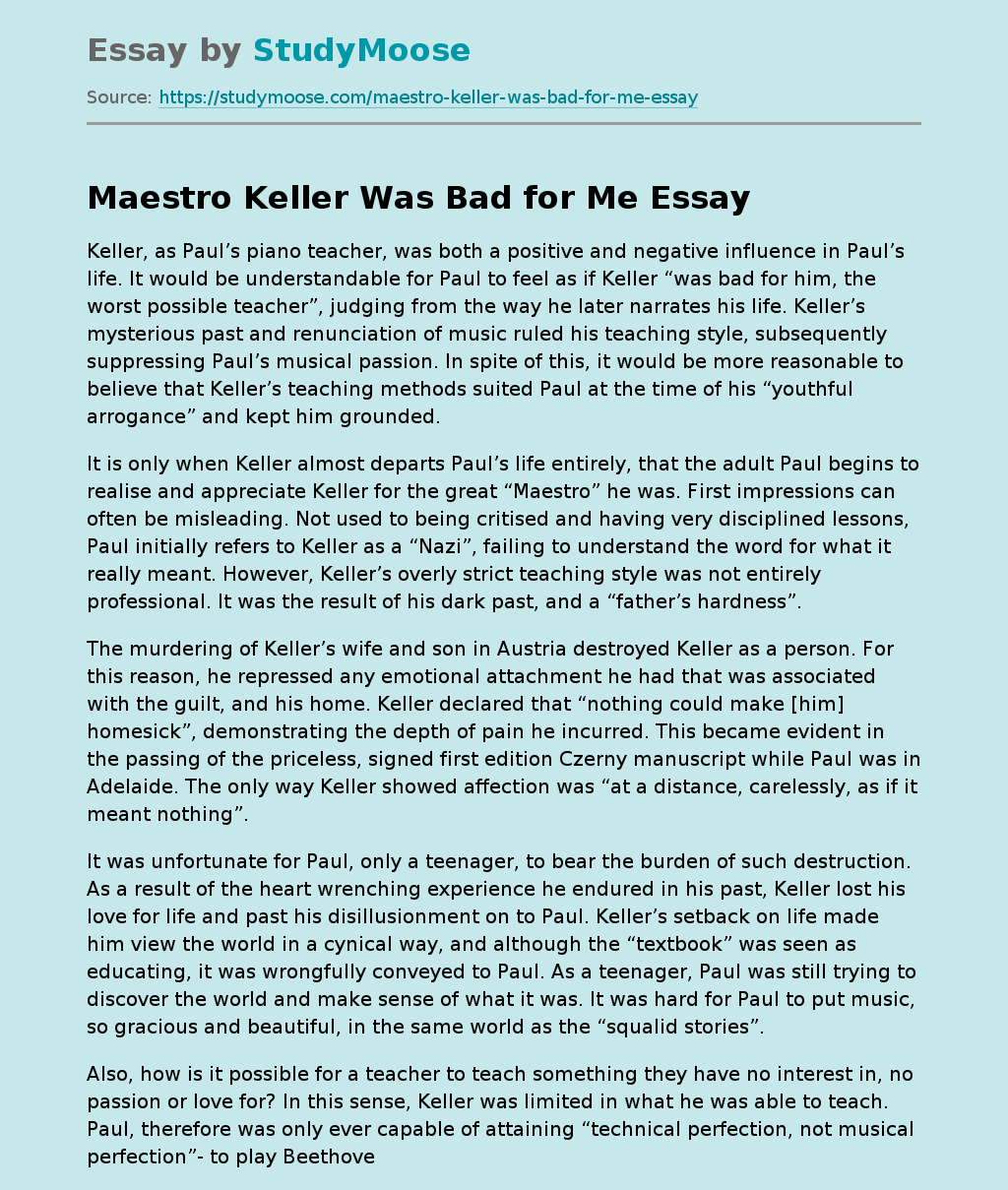