Kate Keller plays the role of an obsessive mother and a typical wife in the play “All My Sons” It his her motherliness that defines her character the most, as the fist few stage directions refer to “mother” as, ‘Mother […] is in her early fifties, a woman of uncontrolled inspirations, and an overwhelming capacity for love.’ This “overwhelming capacity of love” is mostly seen for her son Larry who seems to be dead, but Kate is just not ready to accept reality and move on.

Even before mother’s entry in the play, the readers find out a few details about her through the stage directions and even the dialogues of the other characters, such as the dialogue between Chris and Joe where Chris threatens to abandon home and their business if Joe somehow does not convince Kate for Chris’s wedding with Ann.

Kate’s obsession with her son Larry, who never returned from war goes to such an extent that she has dreams about him, leading her to cry every night.

Proficient in: All My Sons

She is just not ready to accept her son’s death and for the first time her “controlling” nature is seen as she tries to manipulatively tries to create distance between her older son Chris and “Larry’s girl”, Ann; “I think her nose got longer” Her obsession goes as far as even symbolizing the apple tree’s fall as something dangerous, and something harmful coming towards Larry. The fall of the apple tree probably foreshadows the death of Larry, instigating his family to move on.

Another main characteristic that Kate posses is manipulativeness. She avoids every discussion that she realizes, goes towards the future of Chris and Ann. She either deviates the topic or just acts as though she has a headache. She manipulates her discussion with Chris in such a way where Chris finds it impossible to even mention their future together. Kate first talks about how proud she is that Ann has not move on and that she is still waiting for Larry to return, and then suddenly asks him if he is interested in Ann, and ofcourse by then Chris is in no state to hurt his mother further by admitting his love for Ann.

Apart from Larry, Kate is also the one holding the family together. She is the central character of the play who knows the ‘big’ secret, and is making sure that her husband is safe from any confrontations and any sort of trouble. Another reason for holding onto Larry and believing that he is still alive is the fact that if Larry was actually dead, it would be nobody’s fault but Joe’s. She knows the crime that Joe had indulged in and she could not accept the fact that her son may have been killed by his own father, and her own loving husband. She is also the one who again manipulated facts and saved Joe from going to prison; instead framing Ann’s father and sending him to prison.

This secret is another thing that bothers her immensely. However the example of keeping the secret and saving her husband from going to prison shows her smartness and her desire for keeping the family together, as one. But at the same time it also gives the readers a further insight into her character, as the keeping of this secret also hints towards her weaknesses; her family. Her weakness takes her to the extent of dishonesty and guilt. As mentioned above, she depicts the character of a “typical” good wife, by saving her husband and trying to keep her family one through love.

Throughout the play as readers, we realize that there are dark secrets to be revealed and Kate is somehow a central part of it. She plays a significant role in saving her family, but at the same time she is also seen as one of the weaker characters from outside; considering her nightmares and her troubles dealing with the loss of Larry. Therefore it can be argues whether she forms the strongest character in the play, or the weakest. 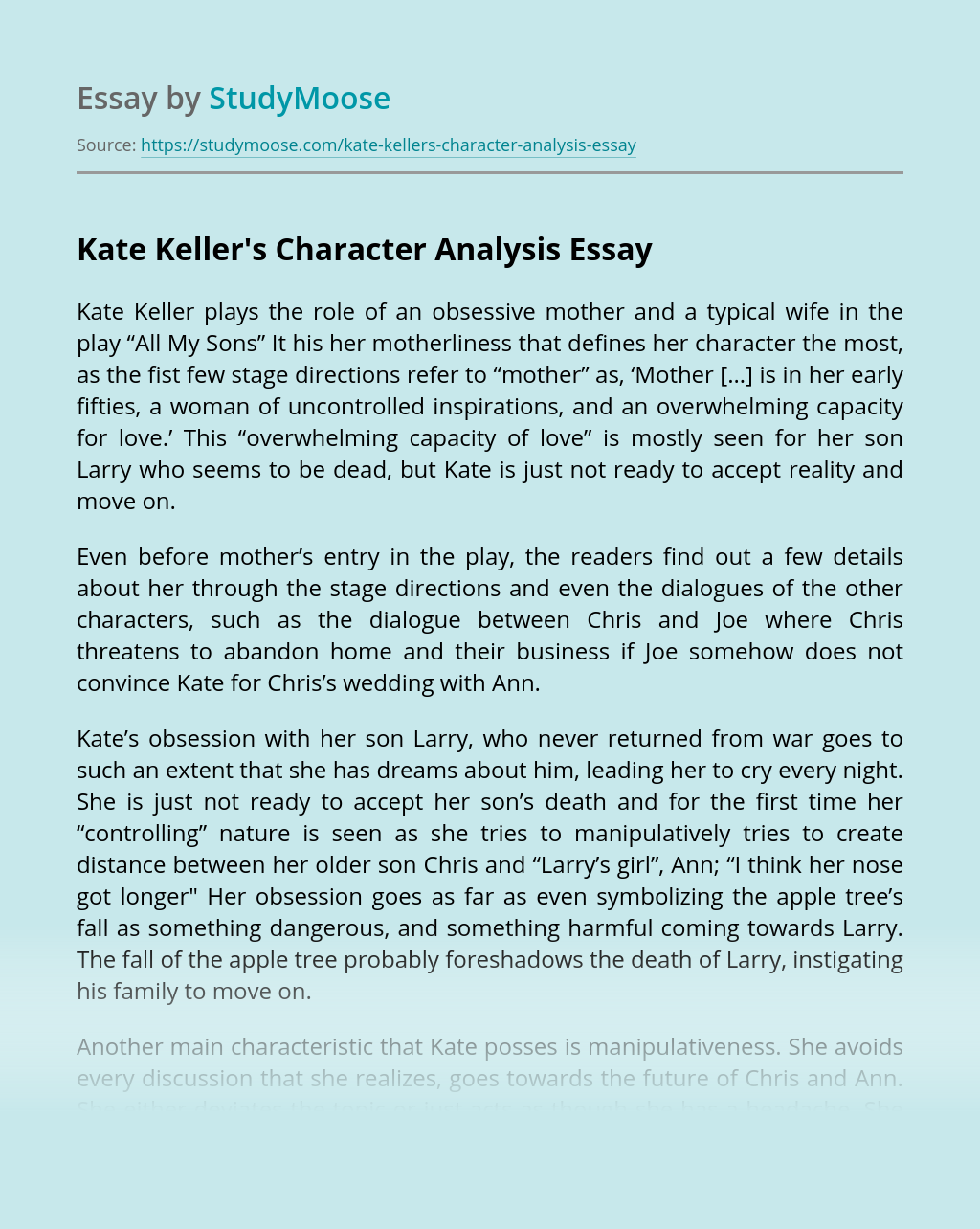