There is a significant impact that is found in Pablo Picasso’s work of Spanish heritage. His first work points to the traditions of Spanish masters of dramatic realism and spontaneity. He then later worked on the break from conventional forms to the style that contributed to his be signature in art history. From the beginning, however, Picasso’s work shows restlessness which finally pushed him in the traditional method of artistic study. This is shown in the artist’s feelings of art schools where Picasso himself detested the pieces he had completed during his years of formal study in the Academy of Fine Arts in Barcelona.

Picasso shows himself with increasing persistence that led him to create an unconventional manner. For Picasso, this meant any time of day or night despite his location, he felt “an expression was immediate” and the force to create must never be missed. Picasso lived a combined life as an adventure and painter. He also had a unique quality of creativity that allows him to be the person to be seen in all of his works.

Picasso’s paintings are suffused with a realism which upstages an artistic genius in a way that opens up a lot of expressions.

Most paintings from almost every artist tend to represent reality from their inner working of the artist’s mind. However, the differences in this reality are got from various positions of realistic interpretation for instance in modern art, the style of preference that Picasso chose to create his works must be considered from the entirety of its expression rather than just adding object-by-object.

His context work becomes the following:

Collections of symbols rather than expressions of reality.
He shows shapes in his work of art.
Picasso’s objects are not deformed even when the entire painting is viewed as a deformed world.
Picasso was great at his form of composition. For example, Minotauromachy comprises of deformed apparitions of both man and beast.
Picasso goes in-depth looking at the understanding of the abstract meaning to portray various interpretations with a given explanation to his paintings.

Another example of this in detail level of abstraction is found in Picasso’s Guernica. Commissioned by the Spanish Government as a mural at the Paris World Fair, Guernica represents the striking of Spain by the Fascists in World War II. Picasso concentrated on the destruction of the city of Guernica into a story of “carnage and castration” which he could put into the enclosure of a mural. Guernica, however, surpasses both space and time to encompass a grander that is the totality of the events which are taking place at the time of its painting.

Picasso chose many of the same figures and images for Guernica as found in Minotauromachy. This can be understood as his use of central figures to the culture of Mediterranean peoples. For instance, the bull is a noble figure in Spanish tradition; hence Picasso uses this image quite frequently in his works. Several other images of notable significance are the mother and child, the horse, and bird. In Guernica, Picasso uses each figure to represent the oppression yet pride of the Spanish people. While the bull represents strength and nobility, the horse is expressing passivity and suffering. The mother and child represent lamentation and death, while the bird signifies an attitude of peace. Picasso strategically combines each of these symbols to tell the story of war-torn Guernica.

A notable observation about Picasso’s finished version of Guernica and his preliminary sketches of the project is that the basis of the creative thought on the project remained intact until the final composition. Picasso once said before he was commissioned to paint Guernica “It would be very interesting to preserve photographically, not the stages, but the metamorphoses of a picture. Possibly one might discover the path followed by the brain in materializing a dream. But there is one very odd thing to notice that basically, a picture doesn’t change, that the first ‘vision’ remains almost intact, in spite of appearances.”

The evolution of Picasso’s painting style began with his works before Modernism between the years 1894 and 1897. He was still just a boy but his artistic genius moved rapidly through this period. A particular painting form this period, Man with a beret, is a compelling realistic piece that Picasso obviously used as a study in a naturalistic style. A sobering composition, this painting may have been for the purpose of executing various styles for Picasso to draw from his memory at a later date if necessary.

Moving forward through Picasso’s evolvement of creativity it is thought that Picasso was greatly influenced by Antonio Caba, director of the School of Fine Arts during Picasso’s schooling. Himself a distinguished portrait painter, Caba most likely influenced Picasso’s development of portrait painting. He created many portraits during the years of 1895 through 1899 including a self-portrait done in 1896. His painting of greatest acclaim during his young years was the painting Aunt Pepa. This portrait painting reveals flickers of strong statements that would resurface in later years as he graduated to modernism. An old woman with strong features, dressed in black set against a dark background holds a forceful statement. Coupled with the vigorous brushwork employed by Picasso, it is the first time Picasso painted with such raw emotion. “He was not yet fifteen, but this portrait is without a doubt one of the greatest in the whole history of Spanish painting.” 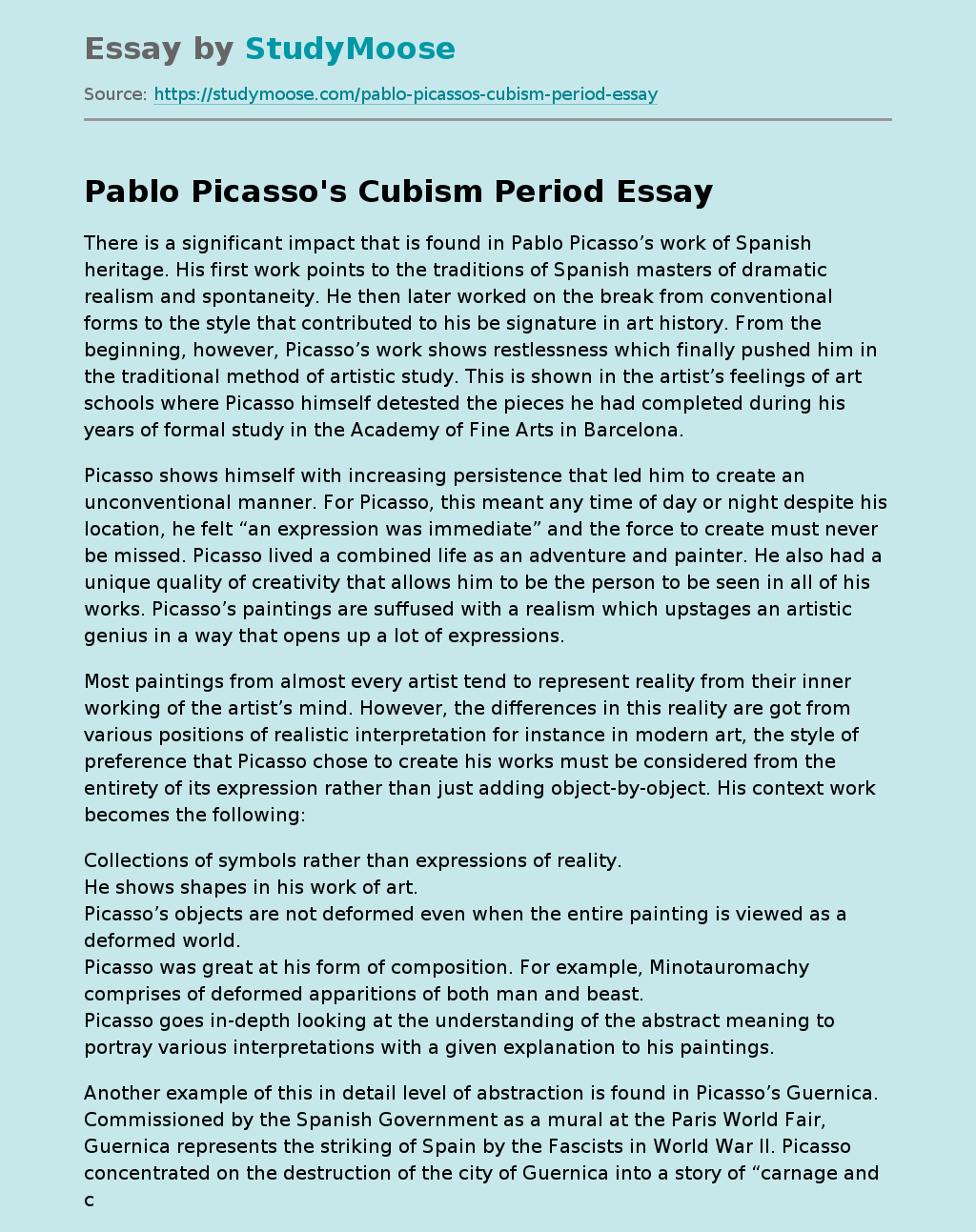