In Ozymandias and Spring and Fall how do Shelley and Hopkins explore the passage of Time?

Ozymandias and Spring and Fall are two poems, which at first glance have little in common. Ozymandias is a traveller’s tale, a story that reminds the reader of something they have read before, perhaps in a children’s book, long ago. This is shown in the first line – “I met a traveller from an antique land”. It sounds like the beginning of a well-known story and the reader can tell instantly that it will be about the past by the use of the word “antique”.

Don't use plagiarized sources. Get your custom essay on
“ In Ozymandias and Spring and Fall how do Shelley and Hopkins explore the passage of Time? ”
Get custom paper
NEW! smart matching with writer

The description of the place is a description of somewhere foreign, unfamiliar in everyday life as the word “desert” is used, yet in the reader’s mind it was once a place of happiness, somewhere they could escape to as a child when they read books. However Shelley has taken it years later and it is now a dismal place – “boundless and bare” is used to show how little remains. He is appealing to the reader’s imagination of what could have been by describing the fallen kingdom that is.

He is looking back on time that has passed.

In contrast, in Spring and Fall, Hopkins is talking of time that is currently passing, rather than looking back on time that has gone already. Unlike Shelley, Hopkins is talking to a certain person, rather than just any audience who happens to be reading the poem. Spring and Fall is a very personal account of the passage of time, and though less foreign, it is also less familiar in the reader’s mind.

In Spring and Fall the poet is looking forward rather than back at the passage of time, and talking directly about it to a person, rather than telling a story about one and his experience of time, as in Ozymandias.

In Ozymandias, because the passage of time is over, there is nothing remaining. It is a descriptive poem, rather than a reflective one, and talks of human civilisation over time in such an explanatory way that there is little room for emotion. The reader can feel the emotion from the past from the use of words such as “sneer” and “mighty”, but over time that emotion has been lost and the last line – “the lone and level sands stretch far away” shows that the passage of time has changed what once was, and the landscape is now emotionless and almost pathetic.

In contrast, because Spring and Fall is talking about something that is currently happening as time passes, at this very moment, that makes it seem a lot more emotional because it does not seem like a lifetime ago, the way Ozymandias does. This is also helped with the use of words such as “grieving” “wanwood” and “weep”. The fact that the poet is talking to a young child also helps as it brings a sense of innocence and vulnerability into the reader’s mind, and makes them feel even more emotional about the fact that time is passing and so the child cannot be innocent forever.

The last line – “it is Margaret you mourn for” sums this up very well. It shows that, though the poem is about mourning for an environment changing as time passes, the real mourning is for the one who is doing the other mourning in the poem – the young child, because as time passes she will have to grow up and lose her blissful ignorance. However these poems do also have similarities in the way the authors explore the passage of time.

Both are pessimistic, saying that a lifetime will eventually come to an end. This point is developed in both poems by the use of people; Ozymandias uses a person who has already lived his life, whilst Spring and Fall talks to someone who has most of hers yet to come. However both use the same tactic to show the passage of time to the reader, and explore how time lasts as long as a person does. The poets both use mourning tones to help them convey this, they are mourning the time that has or will pass.

In Ozymandias the mourning is for something that was once hugely impressive but over time has deteriorated into nothing, whilst in Spring and Fall the mourning is for something that over time to come will lapse into nothingness – a person’s life. As well as being mourning, the poems also have an ominous quality, warning the reader that whatever may happen, time will still pass and there is nothing that can be done about it. Hopkins and Shelley also both use irregular rhyming patterns, possibly to show that time is not always the same, it is often shaken up and differs along its passage.

Both poems are postlapsarian – after the fall, although they do use fall in different ways. In Ozymandias the “fall” is one from greatness to being without status, forgotten over time, whereas in Spring and Fall it is obvious from the title that the “fall” is a period of time itself, a season. This is made even more clear in the poem itself, with use of words such as “leafmeal”, which instantly conjures up the image of brittle decaying autumn leaves. In conclusion, Shelley and Hopkins explore the passage of time in various ways, some similar and some different.

Both use strong words, often ones that appeal to the emotions or senses, for example “decay” in Ozymandias or “sigh” in Spring and Fall. Both use irregular rhyming patterns to mirror the way time works whilst using mourning tones to get across what the poets feel about the passage of time – that it does end and there is nothing that can be done, so they are both fairly pessimistic. They also both use people in their poems to show what they are saying about the passage of time more clearly.

In Ozymandias and Spring and Fall how do Shelley and Hopkins explore the passage of Time?. (2020, Jun 02). Retrieved from https://studymoose.com/ozymandias-spring-fall-shelley-hopkins-explore-passage-time-new-essay 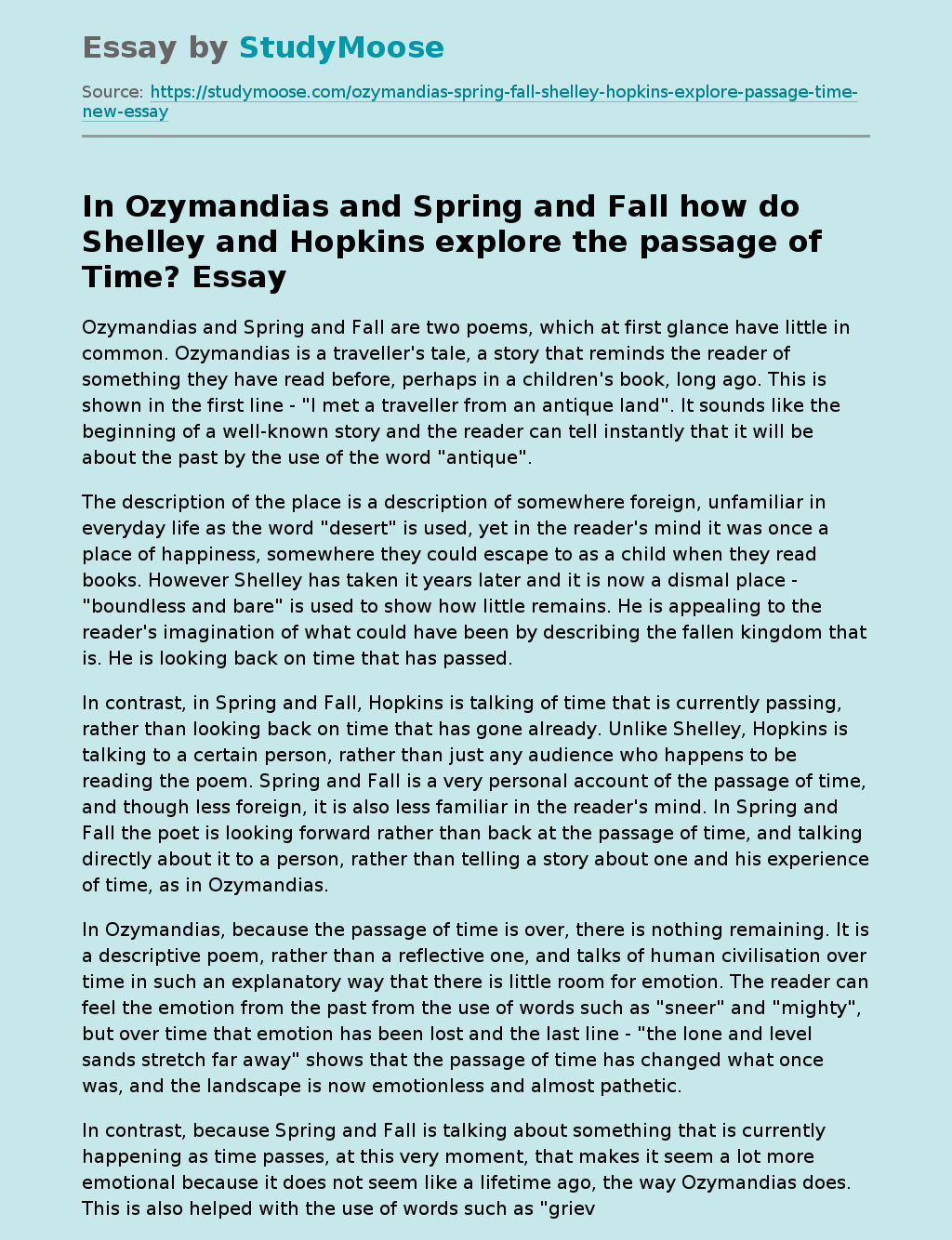